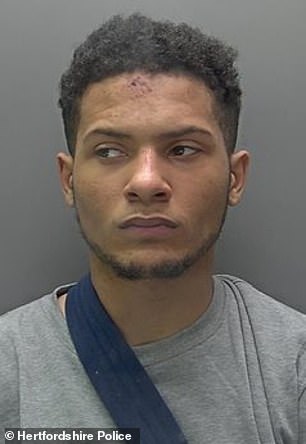 A judge blamed the parents of a thug who chopped off a teenager’s hand with a machete for raising him in ‘squalor’ to become an ‘angry man’.

Che Ambe, 21, savagely attacked 18-year-old Tyler Stevens after chasing him on a moped.

Mr Stevens slipped and was then slashed with the machete up to seven times while curled up in a ball trying to protect himself.

The victim, who saw his hand come off, staggered to a friend’s house for help, leaving the limb in the road.

Police later retrieved the hand but it was too late for surgeons to reattach it and Mr Stevens now has to use a prosthetic.

Mr Stevens, now 19, told St Albans Crown Court: ‘I thought I was going to die. He was hitting me constantly. It was either a machete or a big sword thing. He hit me six or seven times.

‘I don’t know why it stopped – maybe he saw my hand come off and thought that was too much.’

Ambe was jailed for 15 years after being found guilty of causing grievous bodily harm with intent for the attack in Abbots Langley, Hertfordshire, in February.

Judge Michael Kay, sentencing, slammed Ambe’s parents for the way he was brought up and said the case was ‘a story of our times’.

Ambe, of Watford, had convictions for 27 previous offences, including three for knife possession.

He was taken into care aged 12 after being raised by his mother in a world of drink and drugs.

Tyler Stevens, 18,  had his hand chopped off in a ‘savage’ knife attack as he curled up on a grass verge to protect himself, a jury heard

He was expelled from school at 13 and became the victim of a stabbing aged 17.

Judge Kay said: ‘It is not society that is at fault. It is your parents and family – the way you have been brought up and accustomed to as a young man, which is chaos and violence.

‘You have been involved in a world of violence. Your violence is escalating.

‘You post a high risk of harm to others and the risk of further offences is imminent. It is because you know of no other world.

‘You are a very angry young man and when you are angry you turn to violence.. You are a story of our times.’ 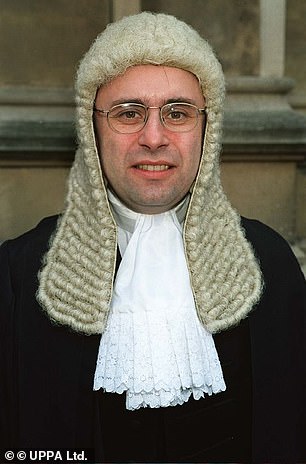 Judge Michael Kay QC, sentencing, slammed Ambe’s parents for the way he was brought up and said the case was ‘a story of our times’

He added that a probation services report had shown Ambe’s risk of danger to the public as one of the strongest he had ever seen.

The court heard that Ambe and Mr Stevens’ groups of friends did not get along in the lead-up to the brutal attack.

Prosecutor Simon Wilshere said Mr Stevens was attacked with a machete or large knife on the evening of Sunday 10 February this year.

The victim, who is now aged 19, was with a friend and making their way back to the friend’s house in Abbots Langley when a moped ridden by Che Ambe approached them.

Mr Wilshire said all three knew each other and did not get on.

As soon as they saw Che Ambe, they started to run, but Mr Stevens slipped.

Mr Wilshere said: ‘He got up and ran between two vans, but slipped again. He fell onto the grass verge. Che Ambe started attacking him with a machete or a similar weapon.

‘He was hit some six or seven times as he was curled up on the ground, trying to defend himself.

‘The attack was as brief as it was savage – one completely severed Tyler Steven’s left hand.’

But the jury was told Ambe acted in self-defence after Tyler Stevens produced a knife and waved it at him.

Judge Kay concluded by saying: ‘Tyler Stevens is left with a life-changing injury. It is evident how his life has changed.

‘He still lives in fear of attack, not by you, but by your associates. He has moved from the area.

‘He needs assistance with daily tasks, such as something as simple as cutting up his food.’

The judge ordered a possible sentence extension of five years, meaning that Ambe could be recalled to jail on his release any time up to 2039.