She enjoyed an extended break over the festive season but the Duchess of Cambridge has returned to work with her first engagement on the New Year today.

Country girl Kate, who turned 37 last week, cut a casual figure in a khaki tweed jacket by Irish brand Dubarry and as she arrived at the King Henry’s Walk Garden in Islington to see how the project brings people together through gardening and food growing.

The jacket £399 jacket has proven to be a hit with Kate, having been spotted wearing it while last-minute Christmas shopping in the Range in Norfolk on December 24.

She opted for her trademark skinny jeans for today’s engagement, her go-to look when it comes to more casual occasions such as this.

In light of the chilly temperatures, Kate added an extra layer in the form of a rust coloured roll-neck jumper that could be seen peeking out from her jacket and ditched her signature stilettos in favour of a practical walking boot.

She added just a touch of bling in the form of a small pair of gold leaf-motif earrings which were framed by her bouncy brunette locks, worn in loose waves today. 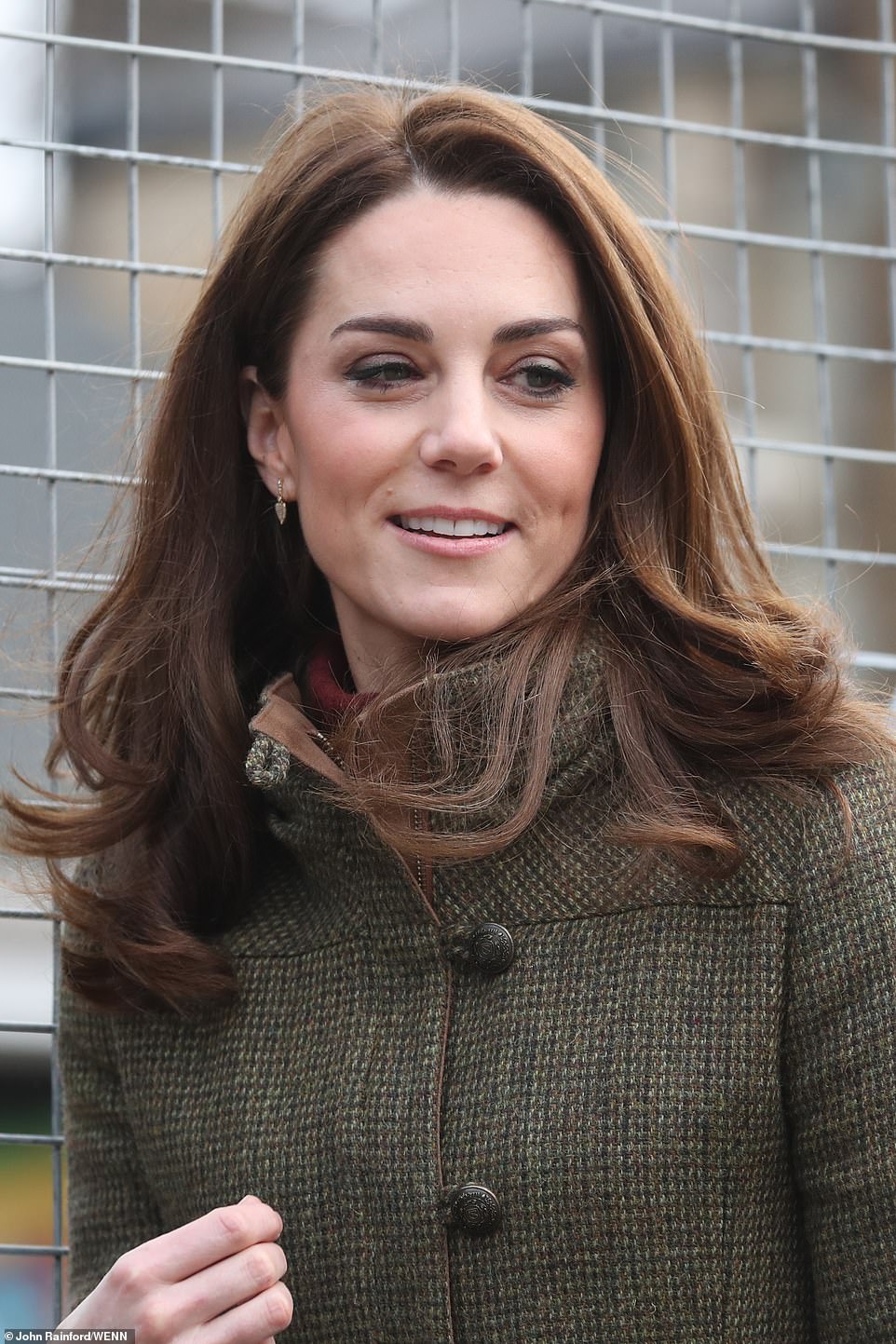 Country girl Kate, who turned 37 last week, cut a casual figure in a khaki tweed jacket by Irish brand Dubarry and as she arrived at the King Henry’s Walk Garden in Islington

Channel country chic in a Dubarry jacket like the Duchess 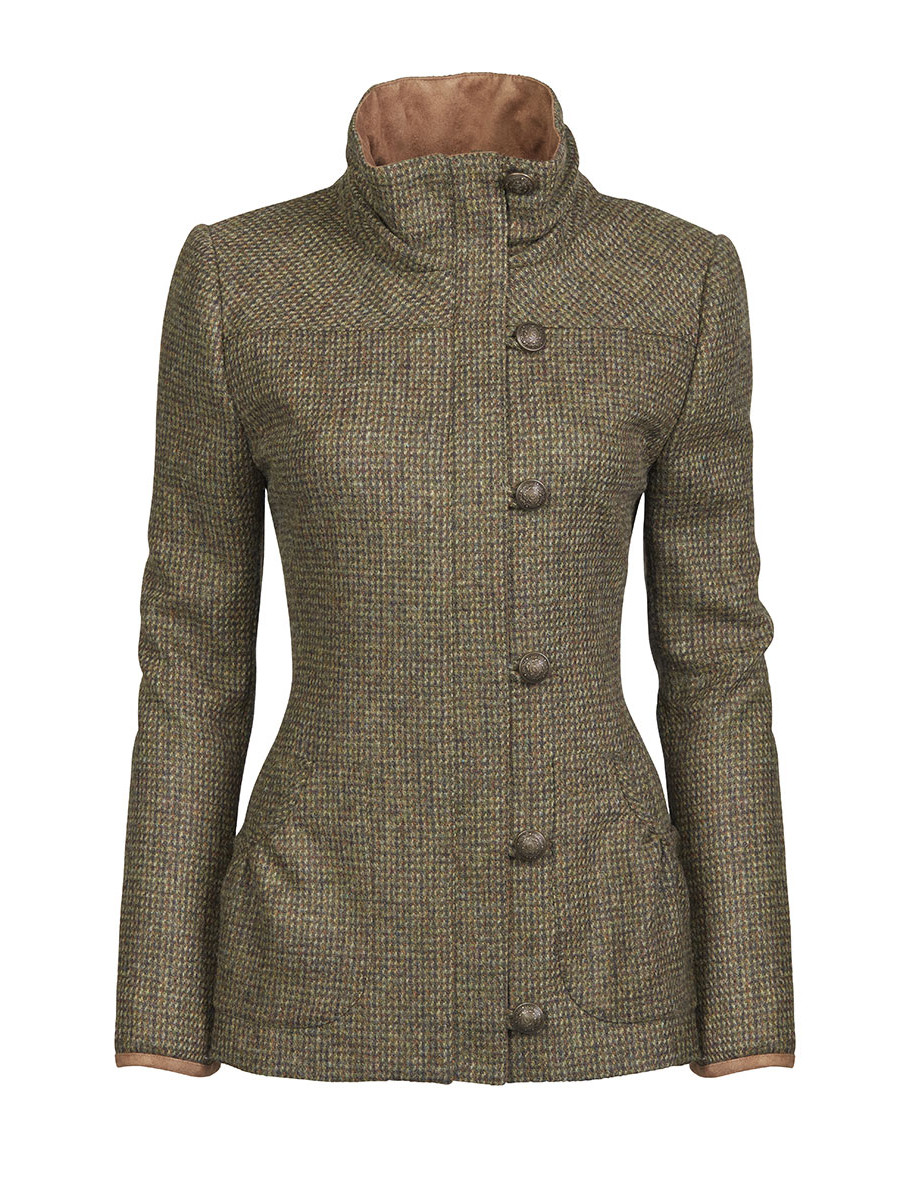 It’s her first official engagement of 2019 and the Duchess of Cambridge channelled country chic vibes as she visited a community garden in Islington.

Kate is a pro at adapting her style to suit any occasion, whether she’s leading the glamour at a red carpet event, or like today, keeping things casual for an outdoor pursuit.

The royal donned boots, khaki jeans, a cosy jumper and tweed jacket by the ultimate country chic label, Dubarry. Spotted on celebrities such as Geri Horner and Amanda Holden, Dubarry is the place to go for pieces that are functional as well as fashionable!

The good news is Kate’s jacket is available to buy now, so click (right) to get it for yourself. We love the button detail and classic tweed material!

Or alternatively, head to the edit below and discover more classic cover-ups by Harris Tweed, Really Wild, Purdey and Joules.

The Duchess of Cambridge will be in her element today as she visits the community garden in North London where she is set to try her hand in an open air pizza kitchen.

The garden has been run for over a decade by community volunteers, with support from Islington Council.

It contains growing plots for cultivation by local residents, where the use of organic gardening methods helps to promote a diversity of plants and wildlife.

It also boasts a full programme of educational sessions and events to engage the whole community.

The garden has also helped to reduce problems such as anti-social behaviour and vandalism in the area. It has subsequently received many accolades, including London in Bloom’s Best Community Garden award in 2008, 2009 and 2011, and the RHS National Certificate of Distinction in 2012.

The duchess will visit the garden to meet with volunteers from the community to hear about the benefits of this urban green space. 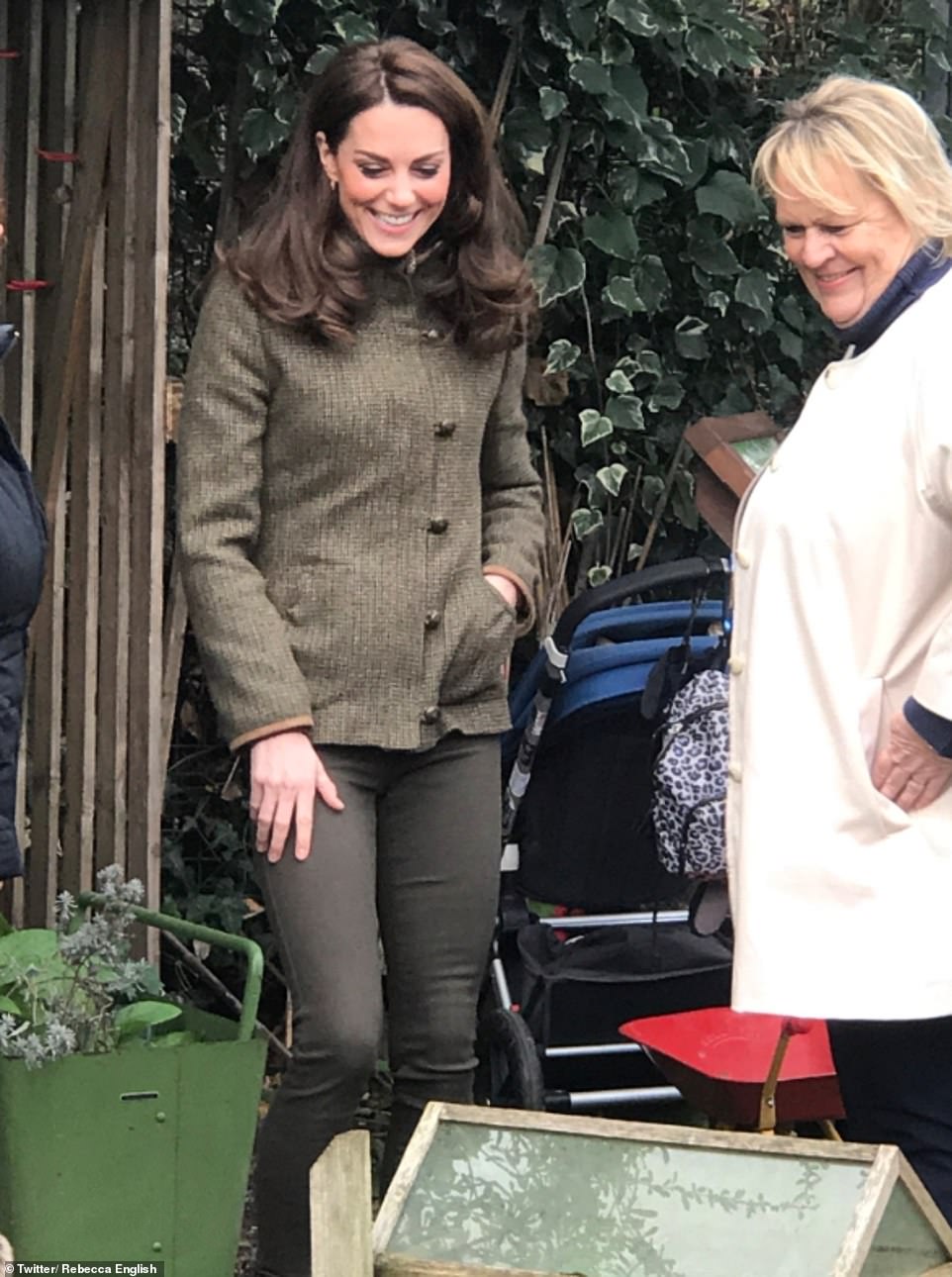 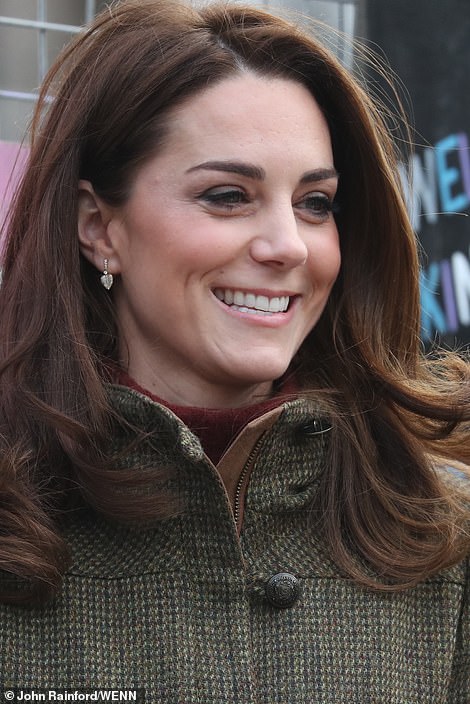 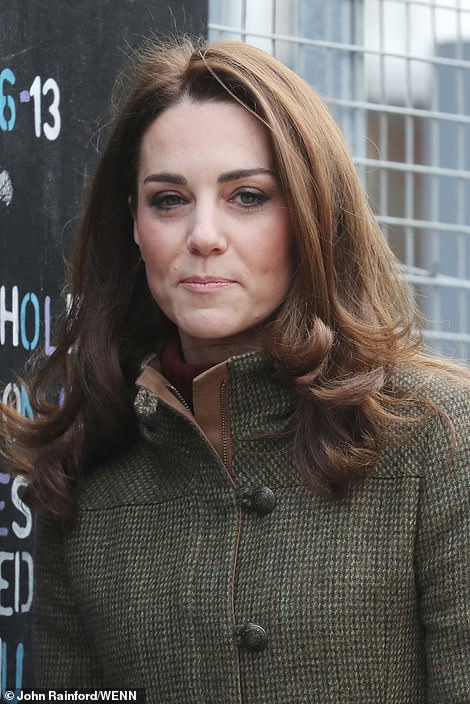 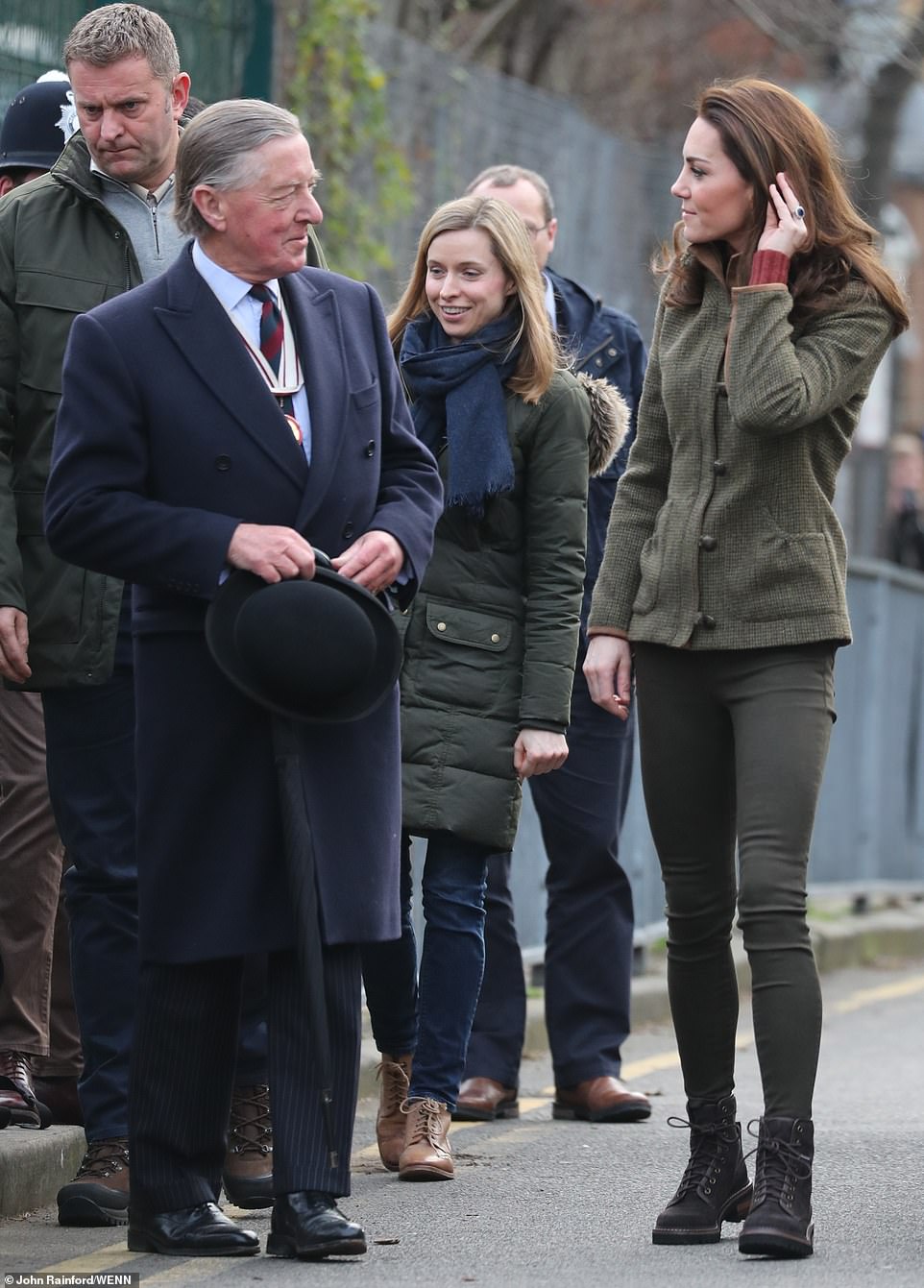 Kate will be shown some of their allotment plots to see the impact that can be achieved in small scale plots. She will then take part in a winter planting workshop, bird box building and pizza making in the garden’s kitchen area.

Kate grew up in the Berkshire countryside and relishes her time at Anmer Hall in Norfolk, the country home she owns with her husband Prince William.

She has often spoken of taking her three children out into the garden to grow their own fruit and vegetables.

This is the Duchess of Cambridge’s first public engagement of the New Year following an extended break for the festive season. 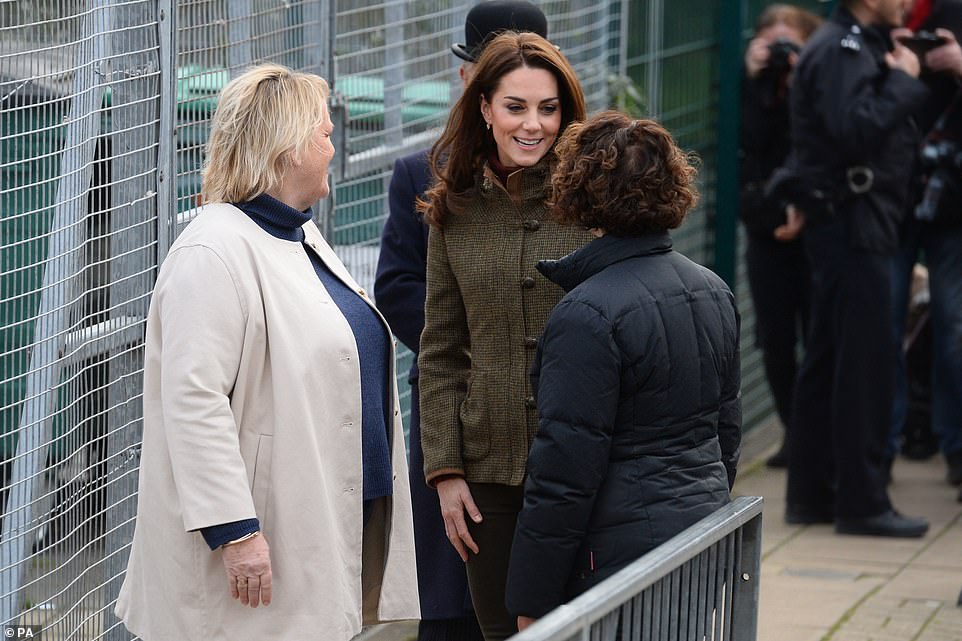 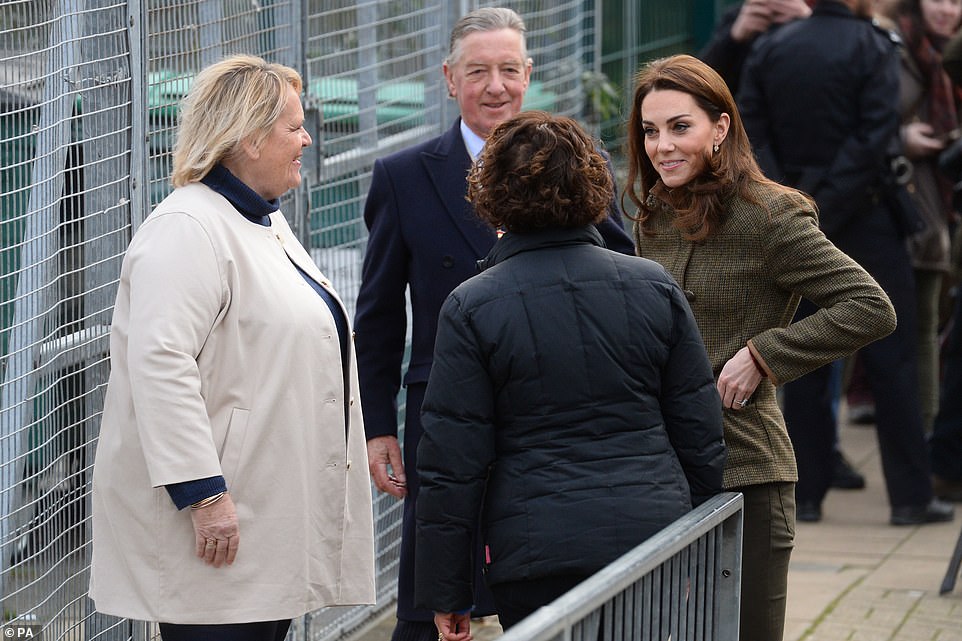 Kate was last spotted attending Sunday service with Prince William on the Sandringham estate just over a week ago but her last official engagement was back in mid December.

She and William visited the Evelina London’s Children’s Hospital together on December 11 making it over a month since Kate’s last engagement.

The Duke of Cambridge, however, returned to work last week on January 9, which also happened to be Kate’s 37th birthday.

The mother-of-three is thought to have celebrated her birthday with a family tea party at Kensington Palace, it has been reported.

The royal is said to have wanted to keep the festivities low-key, opting for just a small gathering with her children, George, five, Charlotte, three, and eight-month-old Louis.

The Duke of Cambridge spent part of the day at Royal London Hospital in Whitechapel, where he marked 30 years of the London Air Ambulance service.

The Duchess of Cambridge is set to showcase her very own garden at this year’s Chelsea Flower Show it has been announced.

Kate, 37, will work alongside the Royal Horticultural Society and landscape architects Davies White to produce the plot to go on display at the annual gardening event.

The garden is being designed to highlight the benefits of the great outdoors and inspire children, families and communities to get back to nature.

It will build on the Duchess’ passion for the outdoors and the proven benefits that nature has on physical and mental health. 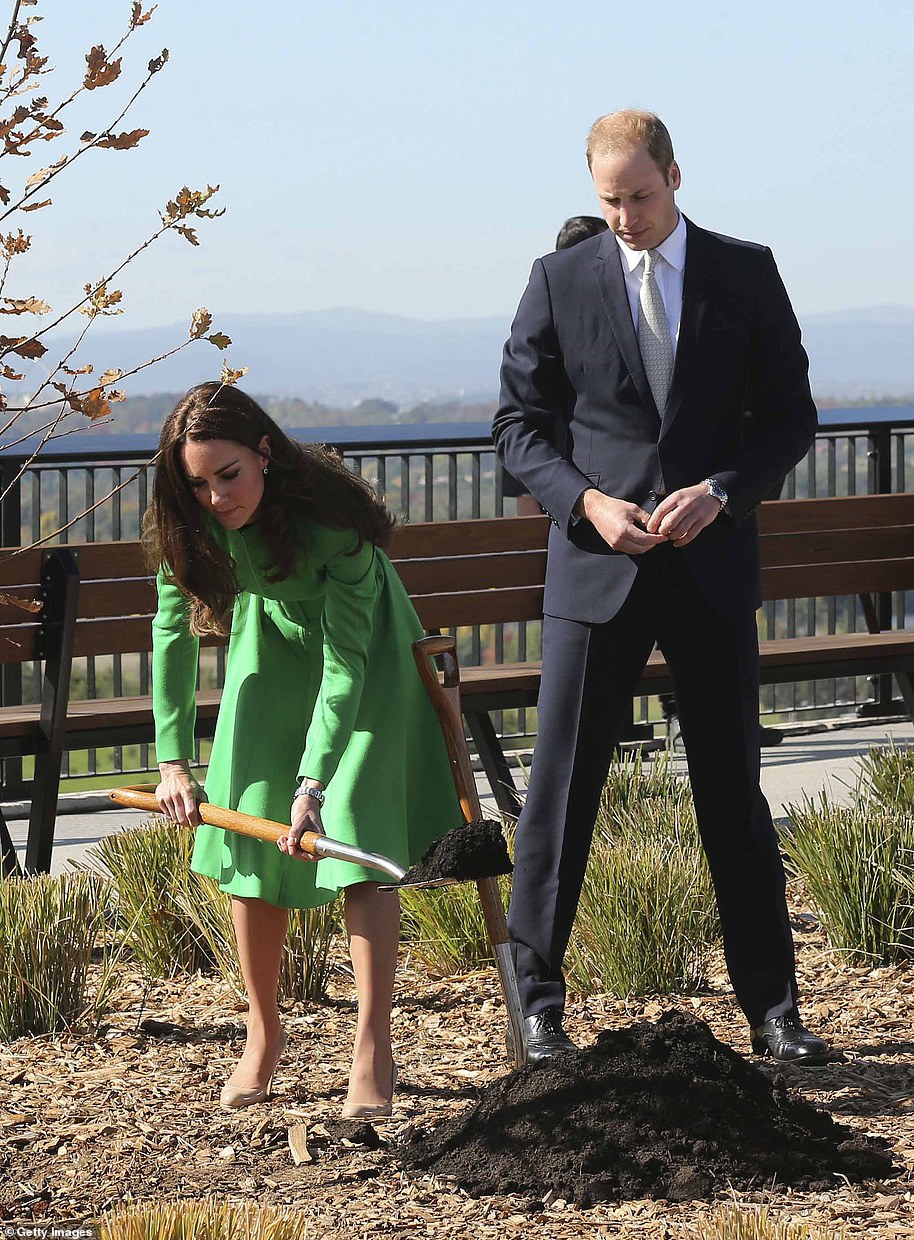 Kate has spent the past three months working with the RHS and Davies White on the garden and will continue to finalise the designer. Pictured: Kate and Prince William plant a tree during their visit to New Zealand in 2014

The mother-of-three is a strong advocate for the positive impact that nature and the environment can have on childhood development.

She has demonstrated this through her longstanding support for organisations including the Scouts and Farms for City Children, as well as at more recent engagements to Sayers Croft Forest School and Wildlife Garden, the RHS Campaign for School Gardening, and her visit today to Islington Community Garden.

Based on a woodland, the garden seeks to recapture for adults the sense of wonder and magic that they enjoyed as children, in addition to kindling excitement and a passion for nature in future generations.

Wild planting and natural materials will be used to recreate a woodland wilderness where children and adults alike can feel closer to the great outdoors.

Kate has worked in collaboration with the RHS and Davies White over the past three months and will continue to finalise the design ahead of the show in May.

Sue Biggs, RHS Director General, said: ‘We could not be more thrilled, or feel more honoured, that The Duchess of Cambridge has co-designed our RHS Garden at Chelsea Flower Show this year, with Award Winning Landscape Architects, Andree Davies and Adam White.

‘For over 200 years the RHS has been championing the power of gardening and growing plants for the environment, for health and wellbeing and to help people of all ages, from all backgrounds, to learn and grow.

‘So to have The Duchess advocating this with us, and to be continuing our partnership with NHS England will, we’re sure, further highlight the powerful benefit that access to gardens, nature and growing plants can have for all our health and happiness.’

GoCompare Car Insurance survey shows new drivers are spending on average £4,300 for first car
Lottery bosses refuse to pay £4million jackpot over 'stolen debit card'
The Latest: US troops from Syria to leave Iraq in 4 weeks
Gunmen kidnap a Canadian and Scot from an oil rig in Nigeria
Body of 31-year-old man is discovered in middle of road following carnival
Talented jazz singer and actress, 43, took her own life
Riyad Mahrez proved he understands Pep Guardiola's style... the City star played a pivotal role
How Twitter helped keep the Prime Minister in No10 in a dramatic 24 hours in British politics