Knife crime in England and Wales hit a record high in the year to September, up by 7 per cent on the previous 12 months.

Police-recorded offences involving a knife or sharp instrument rose to 44,771, figures released today by the Office for National Statistics shows.

But the total number of homicides recorded by police fell by 6 per cent, from 654 to 617. There was also a 20 per cent drop in homicides where a knife or sharp instrument was used, to 221 offences, mainly driven by a decrease in London.

The figures prompted Barnardo’s chief executive Javed Khan to reiterate calls for the Government to take ‘urgent action’ to ‘break the spiral of violence’.

And they come after a wave of bloodshed on the street of the capital last year, which saw 147 murders, in a total compiled by MailOnline.

Figures from the Crime Survey for England and Wales, also released today alongside the police recorded statistics, showed continued rises in overall fraud, with a 9 per cent increase – to 3.8 million offences – in the year ending September 2019, driven by a rise in ‘bank and credit account fraud’.

All other main crime types measured by the CSEW showed no change, including lower-harm violent offences. 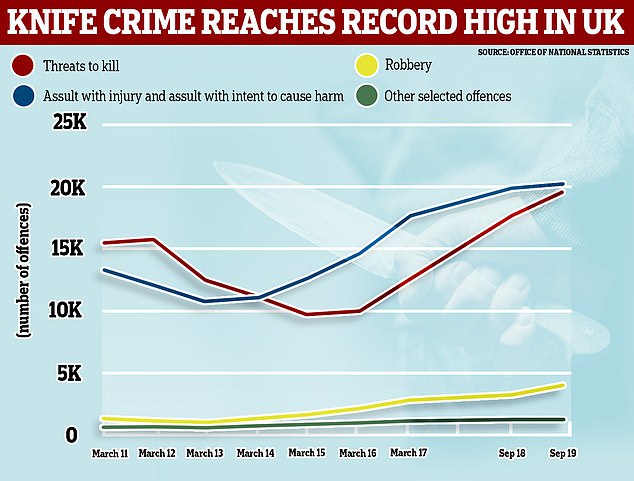 A graph showing the rising trend in knife crime from March 2011 to September 2019, separated by type. It has been split into threats to kill, assault with an injury and assault with intent to cause harm, robbery and other offences. The total number of knife offences in the last year is 44,771 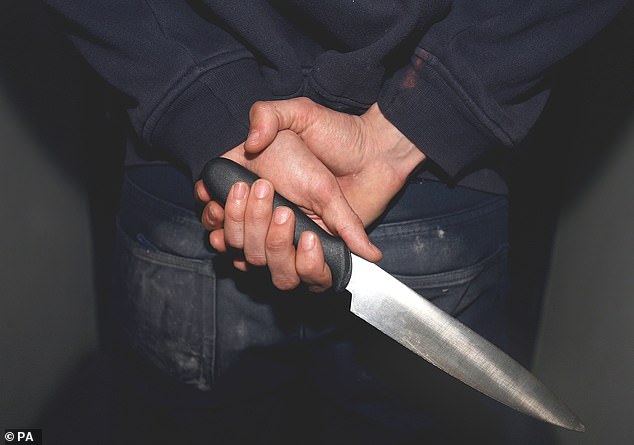 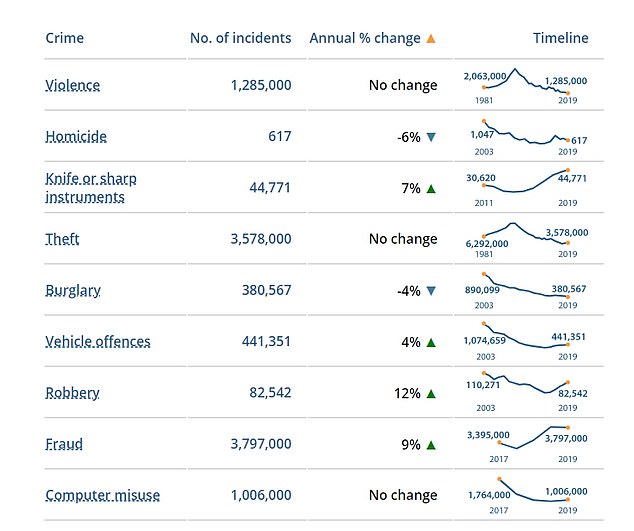 The ONS report separated the types of crime. This graphic shows clear increases in knife crime and fraud

Helen Ross, from the ONS Centre for Crime and Justice, said: ‘In the last year, there has been no change in overall levels of crime, however, this hides variations in different types of crime.

‘For example, there have been continued rises in fraud, vehicle offences and robbery, and decreases in burglary and homicide.

‘Although the number of offences involving a knife has continued to increase, there is a mixed picture across police forces – and overall levels of violence remain steady.

‘We have also seen the number of homicides where a knife or sharp instrument was used decrease by a fifth, driven by falls in London.’ 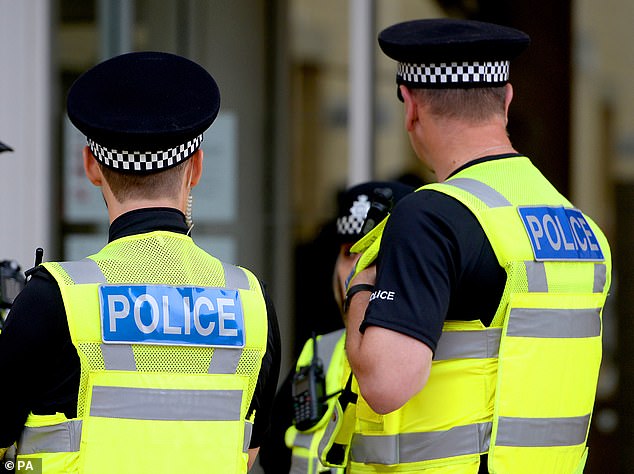 The figures released today come from two main sources of crime data, the Crime Survey for England and Wales and police recorded crime

The figures released today come from two main sources of crime data, the Crime Survey for England and Wales and police recorded crime.

They do not include Greater Manchester Police, which records data differently.

Police recorded data also shows a 4 per cent increase in vehicle offences to 441,351, which includes a 5 per cent rise in the subcategory of ‘theft or unauthorised taking of a motor vehicle’ to 107,745 offences. 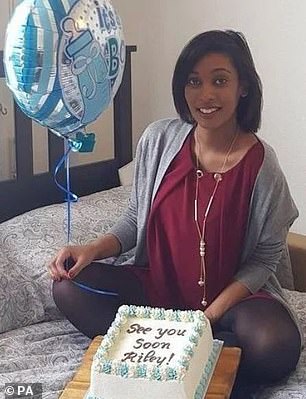 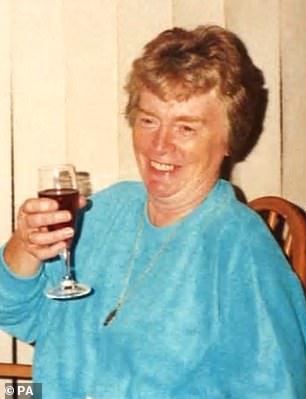 The youngest victim last year in London was Riley Fauvrell, who died aged just five days after being delivered in Thornton Heath, South London, when his mother Kelly Mary Fauvrelle (left), 26, was stabbed to death. The oldest victim was Dorothy Woolmer (right), 89, murdered in Tottenham in August

Barnardo’s chief executive Javed Khan said it was ‘unacceptable that the knife crime crisis continues to destroy so many young lives’ and reiterated warnings that this was a symptom of a ‘much wider, complex problem’, adding: ‘Urgent action must be taken to break the spiral of violence.

‘The Government needs to work with children’s services, charities, social workers, youth workers, the criminal justice system and communities to tackle this crisis.’

In figures recorded by MailOnline last year, the number of murders in London was at its highest level in more than a decade with 147 recorded – more than half of whom were stabbed.

September and June were the joint bloodiest months of the year in the capital with 17 homicides each, followed by July which had 16 and March and December with 15. 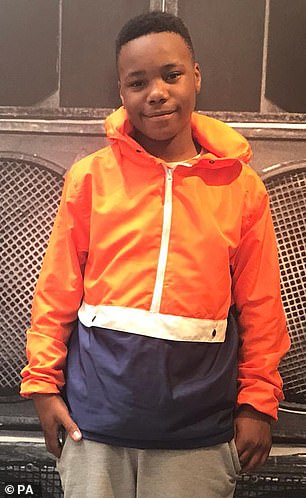 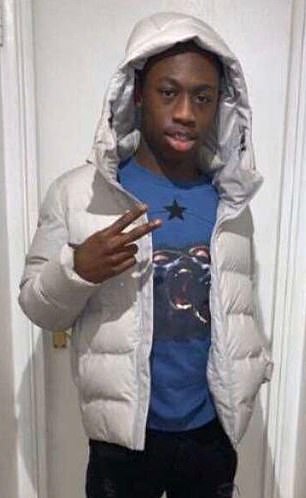 Among the teenagers killed in London in 2019 were Jaden Moodie (left), 14, on January 7 in Waltham Forest; while Baptista Adjie (right), 15, was stabbed to death in Stratford in October 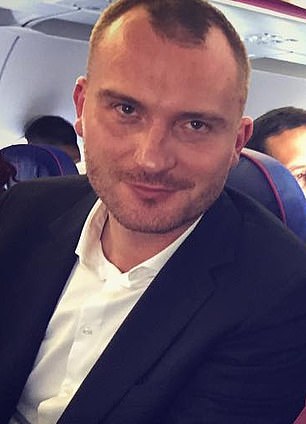 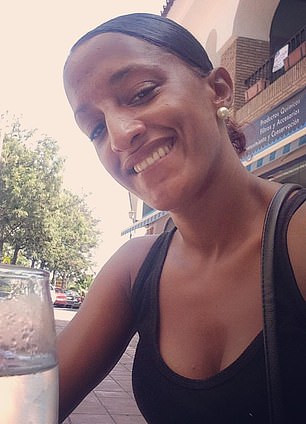 The year began with two murders in the first six hours of 2019, with Tudor Simionov (left), 33, and Charlotte Huggins (right), 32, killed in Mayfair and Camberwell respectively

The 2019 rate broke last year’s total of 133 by early December – and is the highest level recorded since 2008 when Scotland Yard investigated 154 deaths.

The total includes murders and manslaughters recorded by the Met, British Transport Police and City of London Police.

The youngest murder victim was Riley Fauvrell, who died aged just five days after being delivered by an emergency C-section in Thornton Heath, South London.

Riley’s mother Kelly Mary Fauvrelle, 26, was stabbed to death in June while pregnant with him. Her ex-partner Aaron McKenzie, 25, has since pleaded not guilty to murder.

The oldest victim was Dorothy Woolmer, 89, who was raped and murdered at home in Tottenham in August. Reece Dempster, 23, was charged but has not yet pleaded.

Some 17 of the victims were children – including 12 teenagers and five youngsters aged under two – and the mean average age of all 147 people killed was 32.

The year began with two murders in the first six hours of 2019 on New Years’s Day, with Tudor Simionov, 33, and Charlotte Huggins, 32, killed in Mayfair and Camberwell respectively.

January was the second quietest month for murders with only eight – above only October, which saw six. The final month of the year saw 14 homicides.

The last person to be killed in London in 2019 was music producer Flamur Beqiri, 36, who was murdered in front of his wife and child on Christmas Eve in Battersea.

Where the 147 murders across the capital this year have happened 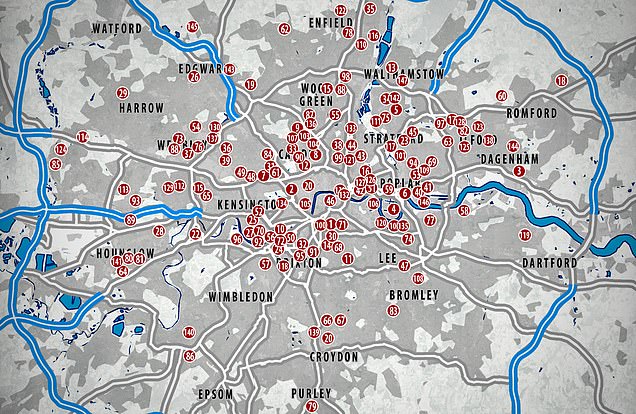 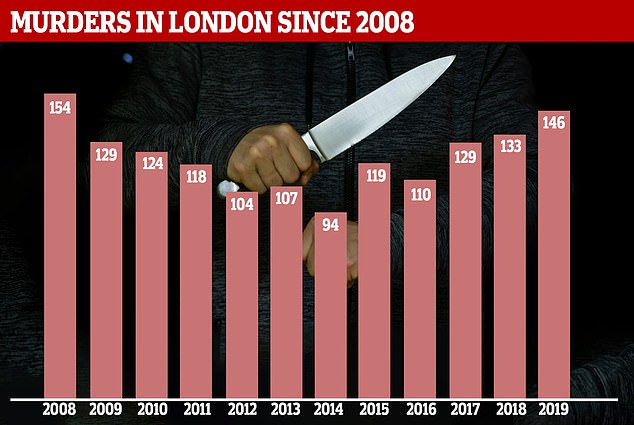