An aide to Matt Hancock was alleged punched by a Labour activist as the Health Secretary visited a hospital at the centre of a storm about a sick child who was forced to lie on the floor while he waited for treatment.

Mr Hancock was sent to Leeds General Infirmary in a bid to defuse a row after a photograph of the four-year-old boy was widely publicised.

But he was apparently met at the hospital by Labour activists and there was an ugly scene with claims that one of his advisers was assaulted.

Tory sources said aides had been trying to bundle the Cabinet minister away from trouble when the situation turned nasty.

They said a protester hit one of Mr Hancock’s senior advisers – understood to be Jamie Njoku-Goodwin – in the face. The sources claimed Labour had been ‘whipping up’ activists to spoil Tory events, and there had been offers to pay for taxi fares to go and confront Mr Hancock.

It is not clear whether the police were involved, or the identity of the individual accused of .

It comes after Boris Johnson bizarrely took an ITV reporter’s phone and put it in his pocket after he was confronted with a picture of Jack Williment-Barr, who was taken to Leeds General Infirmary by ambulance last week with suspected pneumonia.

As there were no beds and the department was experiencing its busiest week since 2016, the boy was left lying on a pile of coats in a clinical treatment room, attached to an oxygen mask. The child was later diagnosed with flu and tonsillitis.

Speaking on the election trail in the north of England today, the Prime Minister said sorry and pointed to the huge investment being pledged by the Tories.

But when ITV reporter Jo Pike tried to show him the picture of the boy on his phone, Mr Johnson declined to look at it. He eventually took the device and put it in his pocket, 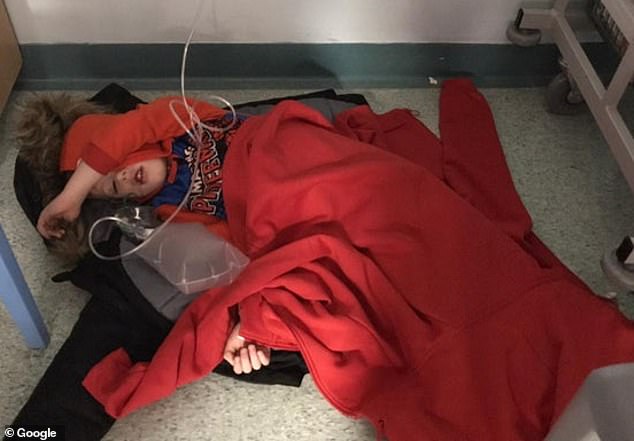 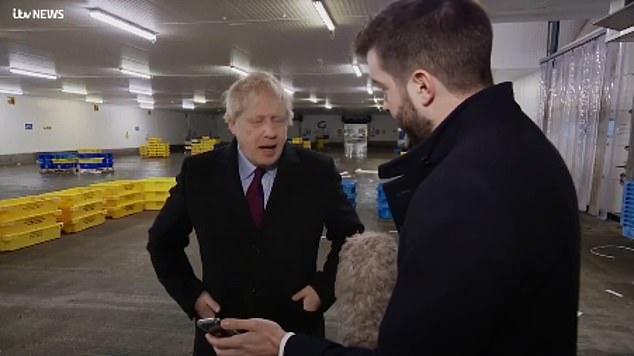 When ITV reporter Jo Pike tried to show Boris Johnson the picture of the boy on his phone, Mr Johnson declined to look at it. He eventually took the device and put it in his pocket, 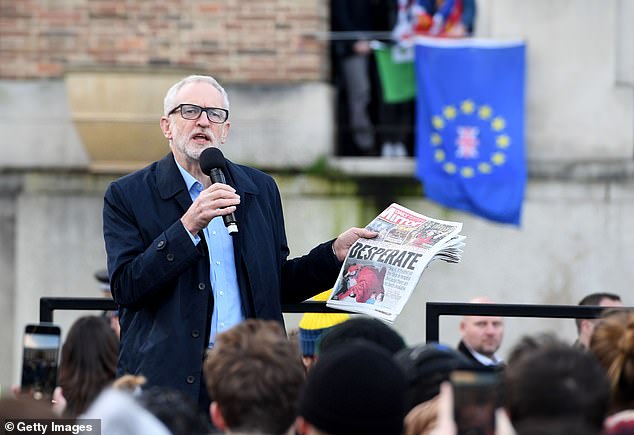 When Pike described what the premier had done, Mr Johnson retrieved the mobile and did inspect the picture.

‘It’s a terrible, terrible photo. And I apologise obviously to the families and all those who have terrible experiences in the NHS,’ he said.

‘But what we are doing is supporting the NHS, and on the whole I think patients in the NHS have a much, much better experience than this poor kid has had.

‘That’s why we’re making huge investments into the NHS, and we can only do it if we get Parliament going, if we unblock the current deadlock, and we move forward.’

At the end of the interview, Mr Johnson said: ‘I’m sorry to have taken your phone. There you go.’

The odd exchange was seized on by Jeremy Corbyn, who insisted it showed that Mr Johnson did not care about patients.

Mr Johnson was also grilled on the interview as he answered questions from journalists at the event in Sunderland.

He replied: ‘We are not only investing in children’s services in Leeds but we’re also rebuilding the whole Leeds Infirmary from top to bottom.

‘And we can do that because we’re now putting the biggest ever investment into the NHS.

‘What I don’t want to see is a fantastic programme that is going to unite and level up our country being blocked again.’

‘I am very proud of what we are doing to rebuild Leeds General Infirmary. It will be a fantastic project,’ he said.

In Grimsby earlier, Mr Johnson was asked if he had an apology for the family.

‘We’re putting £34billion into the NHS now, this is the biggest investment we’ve seen in modern times but we need to drive it forward.’

Mr Johnson said there is ‘so much more that needs to be done’, adding: ‘That is why we just need to unblock the politics of this country and move forward.’

Speaking to LBC the Prime Minister said he wanted to apologise to ‘everyone who has a bad experience’.

The Prime Minister added: ‘By and large I think the NHS do an amazing job, and I think they deserve all praise for the service they provide.

‘But they do need investment and that’s why we’re doing it now. 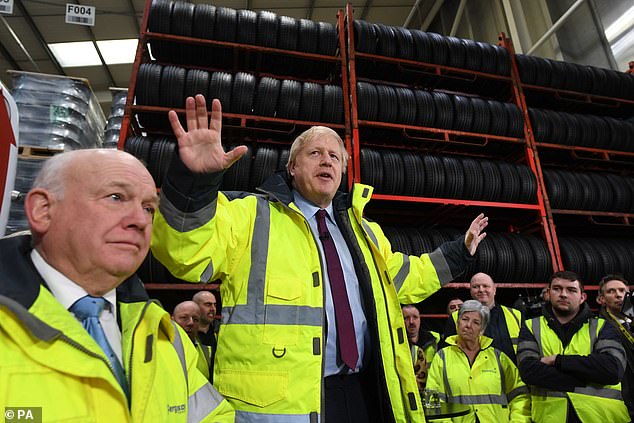 Mr Johnson was asked about the ITV interview as he answered questions from workers in Sunderland today, and insisted he was ramping up investment in the NHS 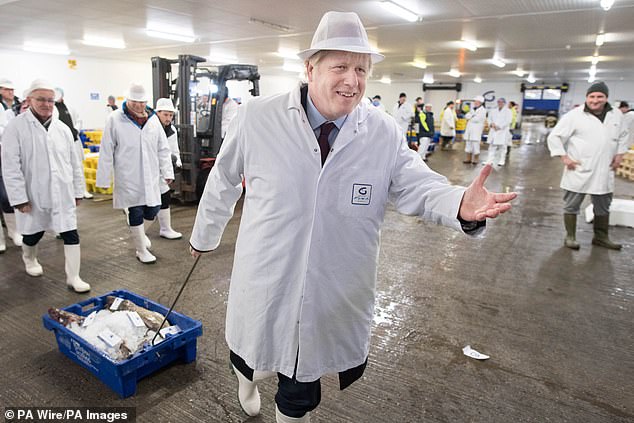 Prime Minister Boris Johnson during a visit to Grimsby Fish Market, while on the General Election campaign trail, where he apologised to the family of Jack Williment-Barr 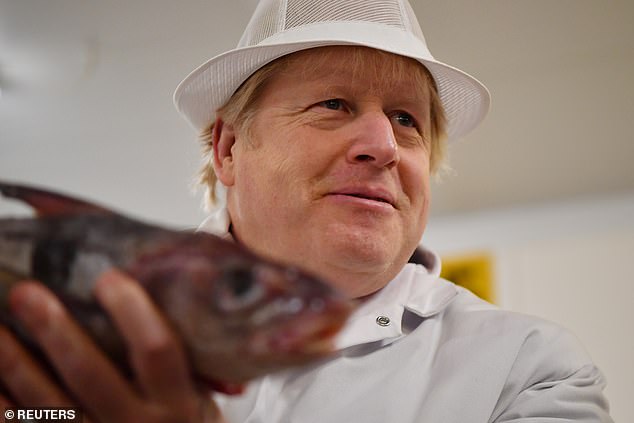 Mother Sarah Williment, a primary school assistant from Leeds, described the situation as a ‘crisis’.

Jack was eventually diagnosed with influenza A and tonsillitis.

One-fifth of patients in A&E must wait more than 12 hours for a bed, experts claim

More than 1 in 20 patients who went to A&E last week waited at least 12 hours for a bed, experts have claimed.

All patients are supposed to be seen within a target of four hours, but thousands are being ‘stranded on a trolley in a corridor’ as the NHS faces its worst winter crisis in history.

The Royal College of Emergency Medicine (RCEM) analysed data from 50 A&E departments which provide around one third of the UK’s acute hospital beds. 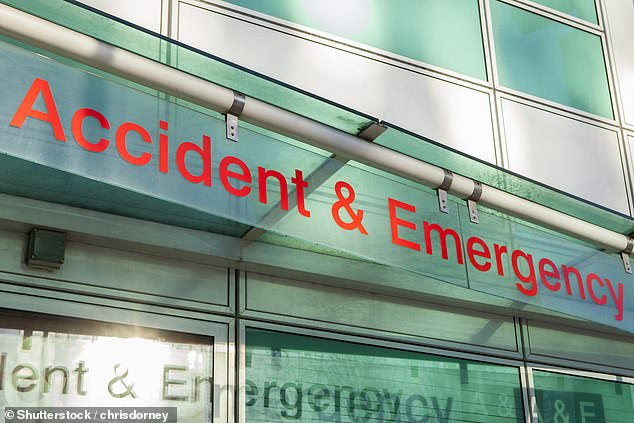 More than 1 in 20 patients who went to A&E last week waited at least 12 hours for a bed, experts have claimed (file image)

Its report shows in the first week of December, some 5,171 of the 103,099 patients who attended these hospitals were stuck in A&E for more than 12 hours.

Only 68 per cent of patients were seen within the target of four hours – the worst performance on record and 10 per cent lower than the same point last year. 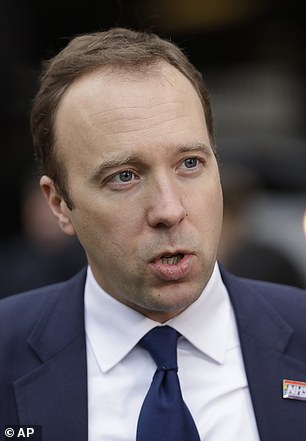 Health Secretary Matt Hancock (pictured) said: ‘Our hospitals are treating a record number of people, and with increasing demand we are putting a record £33.9billion extra funding into our NHS’

In recent days there has been chaos at A&E departments, with dozens of ambulances queuing outside hospitals because hospital beds were unavailable.

The crisis was made worse by a norovirus outbreak that closed more than 1,100 beds last week.

The RCEM’s Dr Katherine Henderson said: ‘Many patients are now getting often life-changing news while stranded on a trolley in a corridor.

‘This cannot be right, and we must strive to put an end to ‘corridor care’. We are clearly in the worst state we’ve ever been in as we enter the true winter season.’

Monthly NHS figures showing the scale of the crisis will be released on Friday.

But the RCEM warns NHS reports do not reflect the true scale because A&E waiting times are measured from when a decision is made to admit a patient, rather than when they arrived.

Health Secretary Matt Hancock said: ‘Our hospitals are treating a record number of people, and with increasing demand we are putting a record £33.9billion extra funding into our NHS.’

Harry and Meghan named their son Archie 'after commanding officer who saved prince's army career'
Off-duty doctor tells of battle to save policeman who had been mown down by his own patrol vehicle
Most atheists and agnostics BELIEVE in the supernatural and ‘underlying forces of good and evil'
Salvadoran president takes responsibility for Rio Grande drowning deaths of father and daughter
The Queen is 'a fan' of 'unflappable' Kate Middleton
Michael Schumacher is 'fighting' to regain his health
Kylie Minogue's ex, Joshua Sasse, ties the knot with his fiancée Louisa Ainsworth in Byron Bay
Masters final day LIVE: Follow all the action from the last round as Tiger Woods bids for glory