Diane Abbott and John McDonnell told Jeremy Corbyn he must sack his closest aides as the shadow home secretary said they were keeping the Labour leader ‘captive’, it was claimed today.

Ms Abbott and Mr McDonnell, two of Mr Corbyn’s most loyal allies, reportedly warned him his leadership of the party would be finished if he failed to act.

Mr Corbyn has been repeatedly criticised in recent months over his Brexit stance and handling of anti-Semitism allegations amid fears among senior party figures that the two issues will haunt the party at the ballot box.

It came as Labour was locked in a fresh row over anti-Semitism as the party went to war with the BBC and reportedly instructed lawyers to warn ex-staffers against breaking confidentiality agreements to leak details of cases to the press or face potential legal action.

The BBC is set to broadcast a Panorama documentary on Wednesday believed to contain new claims about the way in which Labour has dealt with anti-Semitism allegations.

The documentary has prompted the party to write to the BBC to accuse it of interfering in the political process.

The Sunday Times said Ms Abbott and Mr McDonnell had confronted Mr Corbyn and demanded that he shake up his top team.

They reportedly told him to sack his communications chief, Seumas Milne, and his chief of staff, Katie Murphy, because of their alleged influence over the party’s Brexit policy. 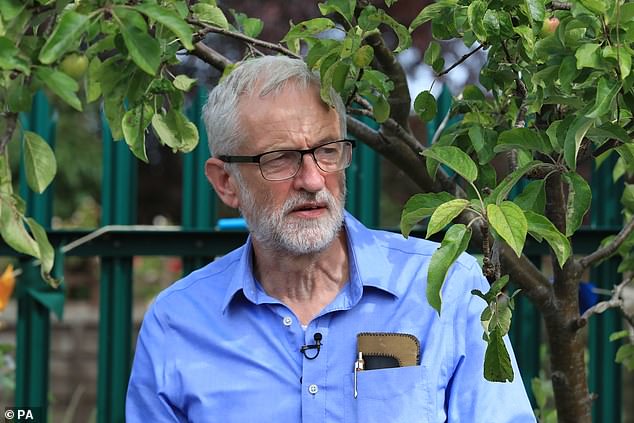 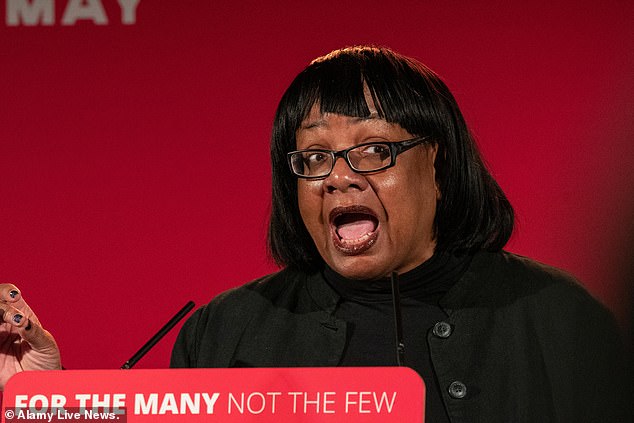 Diane Abbott, the shadow home secretary, is alleged to have told friends that Mr Corbyn’s aides were keeping him ‘captive’

The two shadow cabinet ministers are believed to have told him that failing to back a second Brexit referendum in all circumstances would effectively spell the end of his leadership.

Ms Abbott apparently told friends about the meeting and said: ‘They are keeping him captive.’

Labour was rocked last week by a poll which put the party in fourth place on just 18 per cent – it’s joint worst-ever performance.

Many in the party believe the only way for Mr Corbyn to reverse the fortunes of his party is to announce full and unequivocal backing for a second referendum.

At the moment he has only said he wants a ‘public vote’ – either a general election or a second referendum – to decide on whether to go ahead with a Tory-led Brexit.

His preference remains a general election to break the Brexit impasse but senior figures in the shadow cabinet believe the time has come to formally back a second referendum and to go even further and commit to campaigning to Remain.

Despite the alleged push to get rid of Mr Milne and Ms Murphy, Mr Corbyn has also been warned that doing so may only postpone what one shadow minister called an ‘ice-pick’ coup by rivals – a reference to the murder weapon used in the assassination of Mr Corbyn’s Communist hero Leon Trotsky in 1940.

The Labour leader is this week braced for damaging new testimony over his party’s failure to crack down on anti-Semitism. The Mail on Sunday understands that the BBC Panorama investigation will produce evidence alleging that Mr Corbyn’s own office interfered in disciplinary cases involving anti-Jewish conduct. 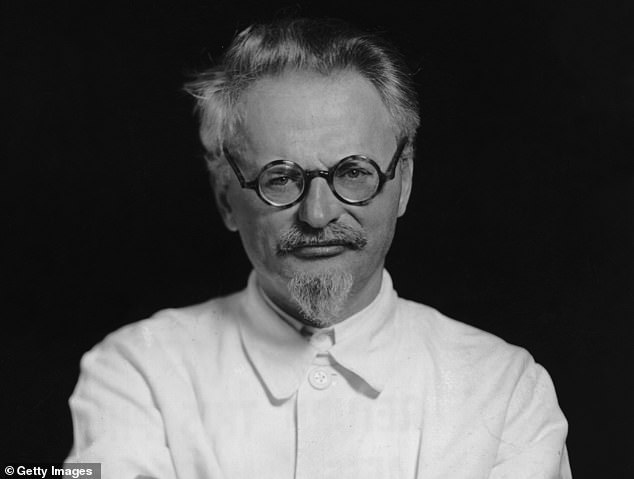 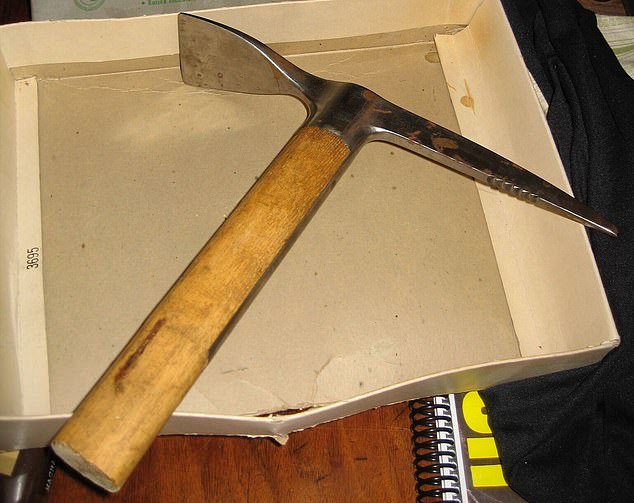 The ice-pick used to assassinate Mr Corbyn’s Communist hero Leon Trotsky. The use of the word ‘ice-pick’ in reference to Mr Corbyn has sparked fury from his allies however, who labelled the comments ‘insensitive’

Sources say the programme will include interviews with ex-party workers who are prepared to breach non-disclosure agreements to make on-the-record accusations against their former employer.

Up to eight ex-staffers – some of them formerly ‘very senior’ – are understood to have co-operated with Panorama, in some cases at the risk of legal reprisals.

Sources say their testimonies will focus on ‘named individuals’ within the office of the Opposition Leader. The office includes chief of staff Ms Murphy and strategy director Mr Milne, although both are now said to be centrally employed by the party.

One source said the programme would reveal ‘the politicisation, stealthy and overt, of a process to shift the interpretation of what is anti-Semitic towards a Corbynite view of what constitutes anti-Semitism’.

Labour is also being privately accused of trying to ‘gag’ Panorama by only agreeing to give an interview if certain questions were not asked.

But the party launched an astonishing attack on the BBC last night and announced it was complaining to director-general Tony Hall.

A source said: ‘Rather than investigate anti-Semitism in the Labour Party in a balanced and impartial way, Panorama appears to have pre-determined its outcome and created a programme to fit a one-sided narrative.’

JEZZA AND HIS REVOLUTIONARY HERO

Leon Trotsky, the Russian revolutionary murdered with an ice-pick on the orders of Stalin, has long had a fan in Labour leader Jeremy Corbyn.

As a backbench MP, Mr Corbyn called for the ‘complete rehabilitation’ of Trotsky, who was written out of Russia’s history books after his assassination in 1940 in Mexico, where he lived in exile. Trotsky’s name is now synonymous with his theory of establishing worldwide socialism by continuous revolution.

In 1988, Mr Corbyn and other far-Left Labour MPs demanded the Russian state bring Trotsky – former head of the Red Army and a key player in the violence that toppled the tsar in 1917 – in from the cold.

Mr Corbyn appeared to pay court to Trotsky last year when he was spotted with his Mexican-born third wife, Laura Alvarez, near the Trotsky House museum in Mexico City. Trotsky was exiled in 1927 for opposing Stalin.

It also accused the BBC of ignoring polling showing Islamophobia within the Tory Party.

The source added: ‘With a possible Election around the corner, this smacks of bias and interference in the political process by the BBC and a clear breach of its own editorial guidelines.’

It called the ex-Labour staffers ‘disaffected former officials’ who had always opposed Mr Corbyn’s leadership and had ‘personal and political axes to grind’.

But in a further blow to the party, Gordon Nardell QC – the lawyer advising the party on dealing with anti-Semitism cases – is to quit, although Labour insisted this had nothing to do with this week’s Panorama programme.

It also emerged that the Equality and Human Rights Commission, already investigating Labour over anti-Semitism, may now probe emails relating to the controversial temporary ‘clearing’ of MP Chris Williamson, who had been suspended for claiming Labour had apologised too much over the affair. The new revelations come amid signs that even Left-wing allies of Mr Corbyn are ready to join forces with party moderates in frustration at his failure to get a grip on anti-Semitism and at confusion over the party’s Brexit position.

There is anger at Labour’s plummeting appeal after a poll last week put it in fourth place behind the Liberal Democrats. The news prompted moderate Labour MP Jess Phillips to call openly for Mr Corbyn to consider his position.

In a reference to the death of Leon Trotsky, one shadow minister last night provocatively claimed that ‘the ice-picks are being sharpened’ against the party leader. But the ‘insensitive’ language sparked fury from allies of Mr Corbyn. 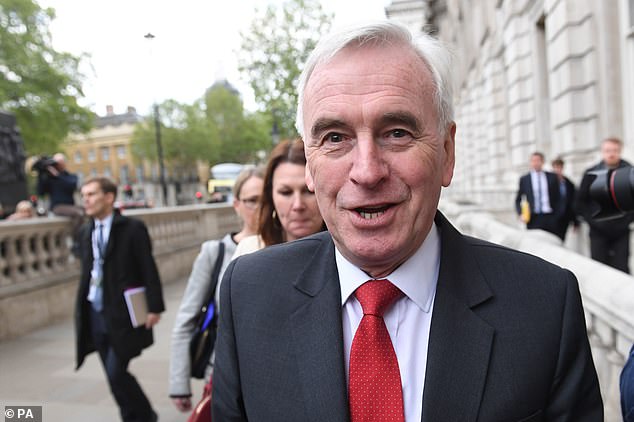 Mr Corbyn is believed to have refused the alleged demand from Ms Abbott and Mr McDonnell to sack his senior aides – but other sources said he realised he may indeed have to sanction their departure.

Party insiders claim he would be unable to function without the vital support the two aides provide.

A spokesman for Mr McDonnell denied the claims describing them as ‘pure invention and absolute rubbish’ while Ms Abbott said she was ‘completely committed to Jeremy Corbyn’s leadership of our party’.

A Labour spokesman questioned the credibility of those interviewed for the Panorama programme, describing them as ‘disaffected former officials’.

Jeremy Corbyn and John McDonnell were regular writers for a hard-Left newspaper which celebrated the IRA’s deadly bombing of the Tory Party conference in Brighton.

Mr Corbyn remained a leading contributor to Socialist Organiser even after it said – only six days on from the 1984 attack that killed five people – ‘a very large number of people in Britain, though a minority, are sorry that the bomb did not kill Margaret Thatcher and wipe out her Cabinet.’

Sean Matgamna, the newspaper’s founder, told The Times that Mr Corbyn ‘had close links with the paper. He wrote for the first five or six years. He wrote frequently.’

Socialist Organiser’s mailing address was the office of the Hornsey Labour Party where Mr Corbyn was chairman.

Two boys are missing after fleeing from police and into mangroves in the Townsville area
Texas 3D gun inventor is BAILED from US prison after 'paying a teenage girl $500 for sex'
Serial killer fears as police arrest man, 27, on suspicion of murder
Bride refuses to cater for vegan guests - and says they should 'bring their own dinner'
Sir Graham Brady has NOT received the 48 letters of no confidence needed to oust Theresa May
Life after persecution: Hardships faced by the Rohingya after fleeing Myanmar
BBC adaptation of His Dark Materials wasn't dark enough by JIM SHELLEY
Union boss cannot call off BA pilot strikes - because he's on a cruise