Labour would ‘consider very very strongly’ voting to revoke Article 50 and forcing the UK to remain a member of the EU, if the alternative were the UK leaving the EU without a deal, a shadow cabinet minister said today.

Rebecca Long-Bailey, shadow business secretary and part of Labour’s Brexit negotiating team, said the move would be considered if an ‘extremely damaging’ break from the bloc without an agreement was the other option.

Pressed by Andrew Marr this morning, on whether Labour would be prepared to revoke Article 50, cancelling Brexit, if the UK was heading towards a no-deal Brexit on Friday, she said: ‘We have promised our party members and our constituents that we will do all we can to avoid a no-deal situation and it’s something that we would consider very, very strongly.’

Ms Long-Bailey told Mr Marr that further negotiations with the Government were planned but added it was ‘disappointing’ there not been any movement on the Government’s red lines. 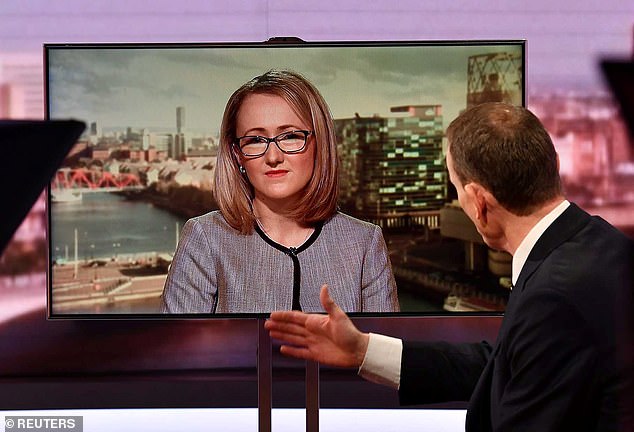 Speaking to Andrew Marr by video link, Shadow Business Secretary Rebecca Long-Bailey could not rule out voting to revoke Article 50

She said: ‘The overall mood is quite a positive and hopeful one.’

But she added: ‘The sad thing is at the moment we haven’t seen overall any real changes to the deal, but we are hopeful that will change in coming days and we are willing to continue the talks as we know the Government are.’

The teams were ‘keeping our diaries as free as possible’ and ‘we have had exchanges with the Government over the weekend, clarifying our position. They have been setting out theirs and hopefully at the beginning of next week we will be having further discussions’.

‘But we are currently waiting for the Government to come back to us now to state whether they are prepared to move on any of their red lines,’ she said.

‘We had great discussions and we went into a lot of technical detail but so far we haven’t seen anything from Government that would suggest they are prepared to change any part of the deal going forward.’

Labour’s key demand is for a customs union with Brussels in order to protect the flow of goods, but Brexiteers vehemently oppose anything that would restrict the UK’s ability to strike free trade deals through being bound by tariffs set by the EU.

She also said Labour had discussed how any changes to the Brexit agreement ‘could be entrenched’ so that any potential future Conservative leader, such as Boris Johnson, would not be able to ‘rip up’ any compromise – a so-called ‘Boris-proof’ deal. 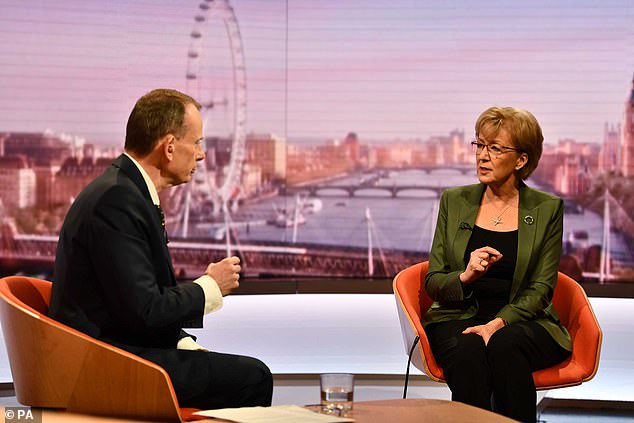 She said a customs union was ‘defined in international law’ and ‘the proposals we have seen from the Government so far and their direction of travel over the last two years have not been compliant with the definition of a customs union’.

‘What we have on the table isn’t a customs union, it certainly doesn’t meet the criteria that many business organisations such as the CBI have been asking for,’ she said.

Tory Commons Leader Andrea Leadsom this morning asked why Labour had not voted in favour of the government’s deal with included a ‘customs arrangement’ and said her backing of a customs union would depend on the detail of the agreement.

On the prospect of a second referendum, Ms Long-Bailey said: ‘We have asked the Government whether they would consider complying with our policy position and as yet we haven’t seen anything to suggest that they will.’

It came as it emerged one third of the parliamentary Labour party had written to Jeremy Corbyn demanding the price of support for any compromise deal struck with the Government must be the promise of a second referendum.

A letter with the signatures of 80 backbench Labour MPs warned Mr Corbyn that a second public vote was their ‘bottom line’ for supporting a deal.