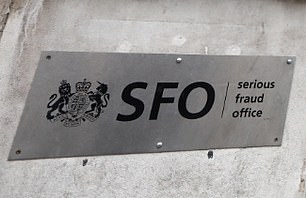 A former senior lawyer at the Serious Fraud Office is suing the department for unfair dismissal, after he was accused of swearing at an FBI agent in the pub.

Tom Martin was a lead investigator on a criminal probe into consultancy Unaoil – one of the SFO’s biggest – before being sacked last December.

According to his claim, filed in May, this was due to ‘gross misconduct’ during a trip to the pub with officials from the US Department of Justice in May 2016.

On the outing, which included a visit to the bar of the US Embassy and then a nearby pub, Martin allegedly swore at a member of the US’s law enforcement unit the FBI, and either called him a spy or ‘quisling’ – slang for a traitor.

Martin is claiming this conduct was not bad enough for him to be fired, and that strong language was ‘part of the culture’, and the decision to sack him was unfair and unreasonable.

No one complained about his language until August 2017, and a formal complaint was only raised about a year after that.

The contents of the formal complaint included allegations from the US Department of Justice and a former executive at Unaoil.

According to the claim filed by Martin, the majority of the allegations against him were discharged in an internal probe.

But he was still suspended in July last year, and dismissed five months later after a disciplinary hearing.

So far the Serious Fraud Office has charged four individuals in the hugely complex Unaoil case with conspiracy to make corrupt payments.

Leah Cambridge surgeon said Brazilian butt lift was a guessing game
Tinder date of man accused of Grace Millane murder said she feared for her life during sex with him
Publisher prints ONE MILLION copies of Bob Woodward's Trump exposé
Calls for British boats to be recalled from the Med to patrol the Channel
Britain ‘days away’ from post-Brexit trade deal with Canada
Kourtney Kardashian appears camera-shy while taking her son to art class in LA
Donald Trump told Russia in 2017 he wasn't concerned about Moscow's interference
Wayne Rooney is 'arrested on public intoxication and swearing charges' in Washington D.C.