Less than a third of Britons think Big Ben should be rung to mark Brexit – should the necessary £500,000 be raised by the public – a poll has found.

A total of 57 per cent of those asked thought Big Ben should not bong on Brexit day – while 30 per cent thought it should – the YouGov poll found.

Meanwhile, 13 per cent said they don’t know whether the iconic peal should be sounded at 11pm on January 31.

The 13.7-tonne bell has been largely silent since 2017 while renovation works are carried out on the Elizabeth Tower which houses it, sounding only for important events such as New Year’s Eve celebrations. 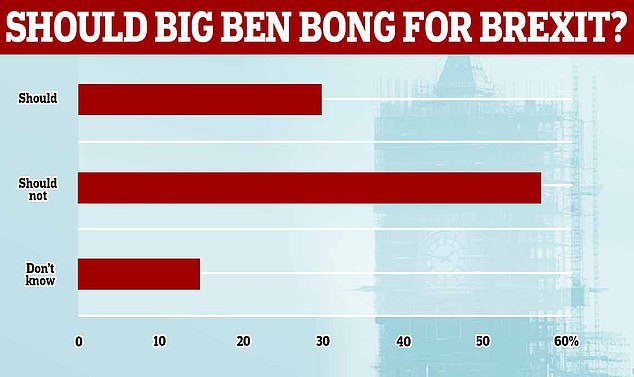 Less than a third of Britons think Big Ben should be rung to mark Brexit – should the necessary £500,000 be raised by the public – a YouGov poll has found

A total of 52 per cent of Leave voters think it should be rung on Brexit day, compared to 13 per cent of Remain voters.

Boris Johnson yesterday said he is planning the crowdfunding campaign after Parliamentary authorities balked at the £500,000 cost.

A House of Commons Commission dismissed the proposal for the bell to sound after MPs were informed that costs had soared to half a million from an original estimate of £120,000.

The question posed by YouGov asked Britons: ‘If the money can be raised from public donations, do you think Big Ben should or should not be rung on Brexit day?’

Mr Johnson told BBC Breakfast on Tuesday: ‘We are working up a plan so people can bung a bob for a Big Ben bong.’ 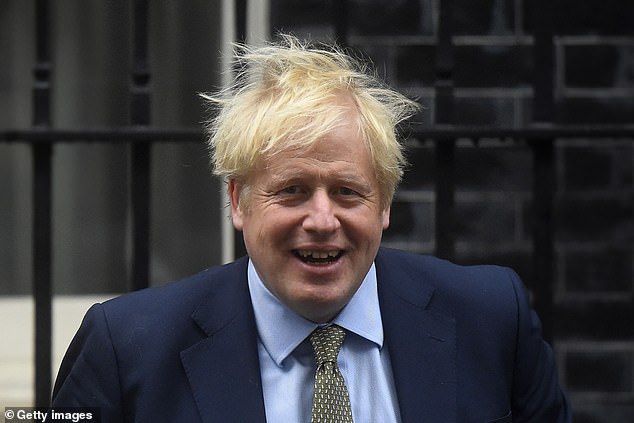 The campaign for the bell to ring at 11pm on January 31 – Brexit day – had been spearheaded by Tory MP Mark Francois.

But costs have soared because the temporary floor – which had been put in place to strike the bell at the new year – has already been removed and would need to be re-installed.

One source told The Telegraph: ‘No one in the meeting thought it was worth spending £500,000 on having Big Ben strike the hour on one occasion.

‘When you consider what else that money could be spent on, it’s very hard to make an argument in favour of it.’

The 13.7-tonne bell has been largely silent since 2017 while renovation works are carried out on the Elizabeth Tower which houses it

‘I’ve already offered to go up Big Ben myself, ably assisted by Bill Cash, to ring the bell myself to save money.

‘If all else fails, the BBC must have a recording of Big Ben chiming they could play at 11pm at no cost whatsoever to taxpayers.’

Ten thousand Leave supporters were expected to attend but it is now unclear how the Commission’s decision will affect the plans.

The Elizabeth Tower has been undergoing renovations and the ringing of Big Ben has been prohibited since 2017 to protect the workers’ hearing, except on the special occasions to which Mr Francois referred.

The Prime Minister’s official spokesman said: ‘If the public wants Big Ben to bong and money is raised that is great.

‘We will make sure that whatever happens… January 31 is properly marked, which is a significant moment in our history.’

He added: ‘It will largely be for the public to determine if this happens.’