Letters revealing George IV’s teenage crush on an older woman and the state of his troubled marriage are among more than 1,600 historic papers published online for the first time.

The historic documents, released as part of the next phase of the 10-year Georgian Papers Programme, shed new light on the king’s life and relationships.

George, Prince of Wales, who went on to rule as George IV, became infatuated with Mary Hamilton, a lady of the court who was six years his senior. 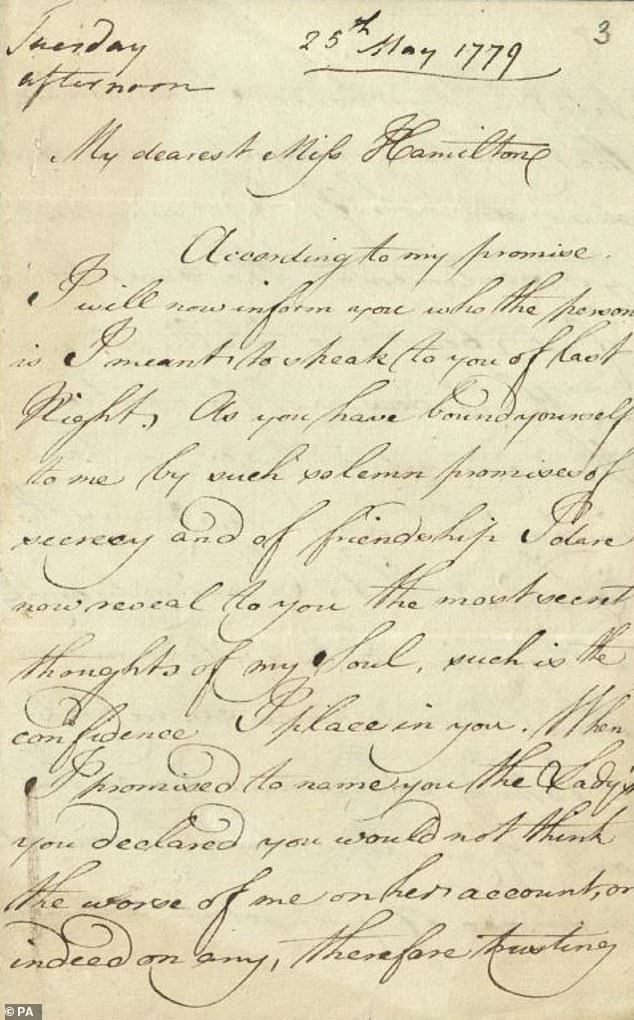 ‘I not only highly esteem you, but even love you more than Words or ideas can express,’ George, then Prince of Wales, wrote to Mary Hamilton, a lady of the court who was six years his senior, in a letter released online for the first time

Mary had been asked by George’s mother Queen Charlotte to come to court to help educate the young princes and princesses.

The future king, then 16, confessed his secret adoration in a handwritten letter in 1779, declaring: ‘I now declare that my fair incognita is your dear dear dear Self…’

He added: ‘Your manners, your sentiments, the tender feelings of your heart, so totally coincide with my ideas, not to mention the many advantages you have in form & person over many other Ladies, that I not only highly esteem you, but even love you more than Words or ideas can express.’

Other letters between the pair include one in which the prince exclaims himself ‘the happiest of men’ to see her wearing his ring, and another in which he apologises for a question that upset her.

Mary did not reciprocate his affection, but instead became a trusted friend and confidante.

A Royal Collection spokeswoman said: ‘Their correspondence reveals much about the social and emotional world of the young prince.’ 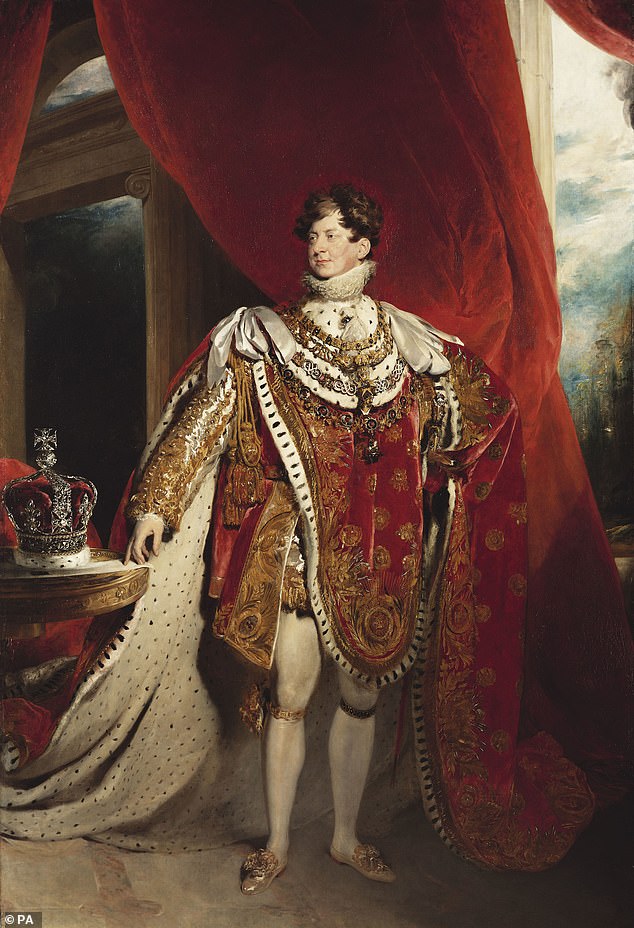 The letters also reveal the state of George IV (in the portrait above) and Princess Caroline’s marriage. The King married her in 1795 in exchange for Parliament paying his debts

Among the personal documents available to see at georgianpapers.com is a four-page note the prince wrote to his new wife Princess Caroline of Brunswick just 17 days after their wedding, already pointing to problems in their marriage.

He tackled his bride over the issue of treating ladies of the court equally, and also expressed his regret that etiquette prevented Caroline’s life from being ‘more gay & amusing’, and stated that ‘if you wish for more of my company it must strike you that the natural mode of obtaining it is to make my own house not obnoxious to me’.

A year later, he wrote of how they had come to terms with their incompatibility, saying ‘we have unfortunately been oblig’d to acknowledge to each other that we cannot find happiness in our union’.

‘Circumstances of character & education, … render that impossible,’ he continued. George IV hated Princess Caroline (in the portrait above). He banned her from his coronation and wrote a will which would have left her with one shilling and given Maria Fitzherbert, a Roman Catholic he had secretly married, the rest

The prince, whose extravagant lifestyle caused his father George III to regard him with contempt, married Princess Caroline in 1795 in exchange for Parliament paying his debts.

He had already secretly and illegally wed a Roman Catholic, Maria Fitzherbert and had many mistresses.

He hated his wife, banned her from his coronation and wrote a will which would have left her with one shilling and given Fitzherbert the rest.

The couple lived together for about a year before George sought a separation. He tried unsuccessfully to divorce her after his accession. 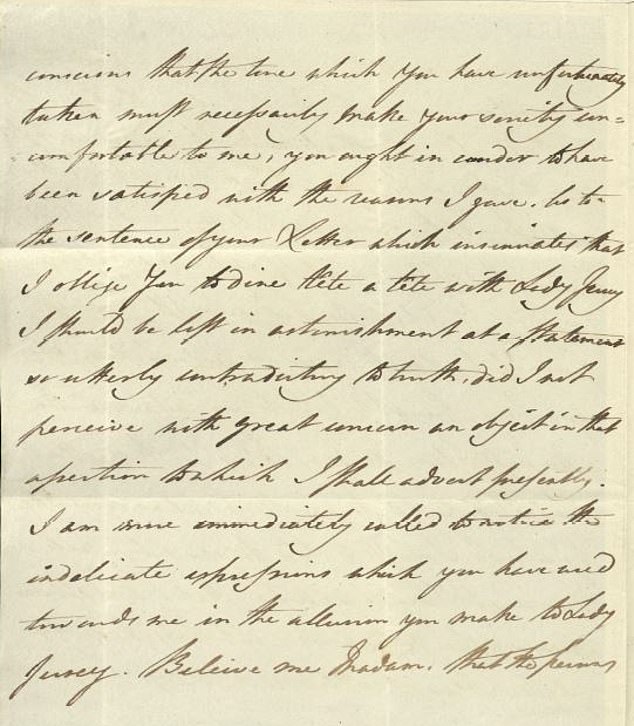 The Georgian Papers Programme is digitising, conserving and cataloguing nearly half a million pages from the Royal Archives and Royal Library relating to the Georgian period 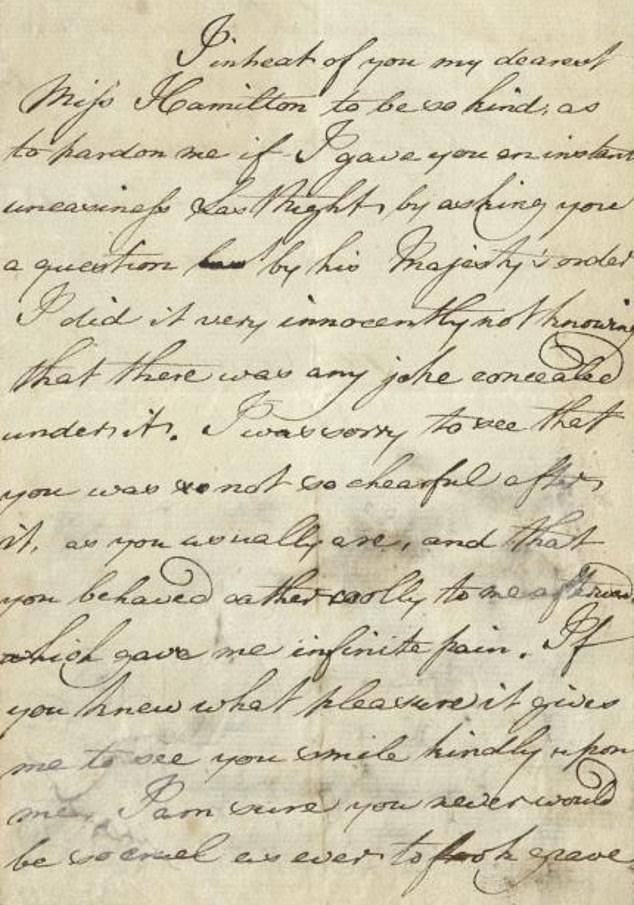 More than 125,000 documents and letters are available to see free online so far (Pictured: a letter from George IV)

Other papers look at the Regency crisis of 1788-9, with George, during his father’s illness, writing letters arguing against prime minister William Pitt’s proposal for a limited Regency, which would have left the king’s Household under the authority of the queen.

The prince argued it would be a ‘project for producing weakness, disorder and insecurity in every branch of the administration of affairs’.

For the last nine years of his life, George III was declared mentally unfit to rule, and his son acted as Prince Regent.

The Georgian Papers Programme is digitising, conserving and cataloguing nearly half a million pages from the Royal Archives and Royal Library relating to the Georgian period.

The partnership between the Royal Collection Trust, King’s College London and US institutions such as the Library of Congress gives the public access to material which brings the day-to-day life of the royal court alive.

More than 125,000 documents and letters are available to see free online so far.