A bid for a second referendum on Brexit went down to a heavy defeat tonight after Labour and People’s Vote campaigners failed to back it.

The proposal tabled by the Independent Group (TIG) of MPs to demand a new public vote was seen off by 334 votes to 85.

But despite Jeremy Corbyn issuing a three-line whip ordering his MPs to abstain, 24 broke it to support the move tabled by former Tory Sarah Wollaston.

Lib Dem education spokeswoman frontbencher Layla Moran posted a picture from inside the mostly empty voting lobby for those supporting the amendment, saying: ‘Where is the rest of the Labour Party? A few notable exceptions but…’

A further 17 Labour MPs defied the whip to oppose the referendum bid, including Ruth Smeeth.

The Stoke MP said afterwards she had resigned as a parliamentary private secretary to deputy leader Tom Watson to oppose it.

Many Labour MPs in Leave areas have previously warned the party not to support a new referendum. 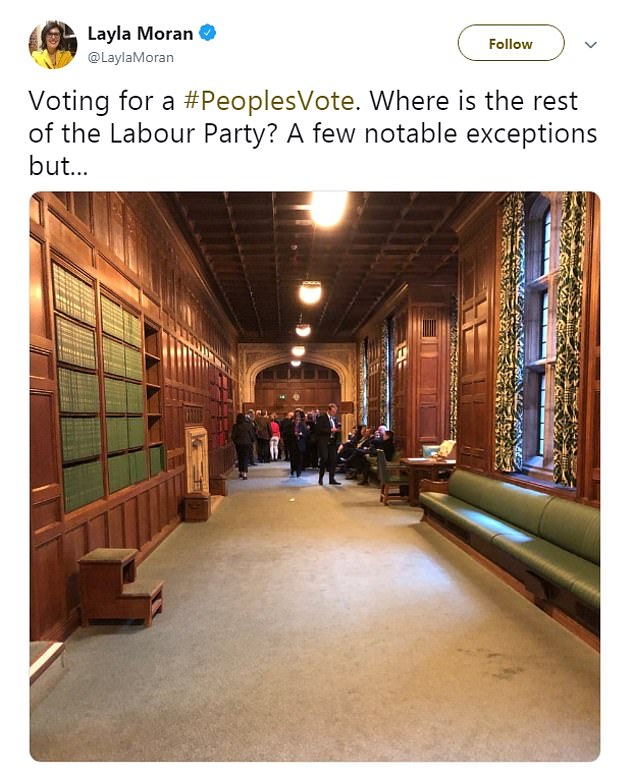 Lib Dem MP Layla Moran shared a picture of the sparsely populated voting lobby in favour of the referendum, after Labour MPs were ordered to abstain 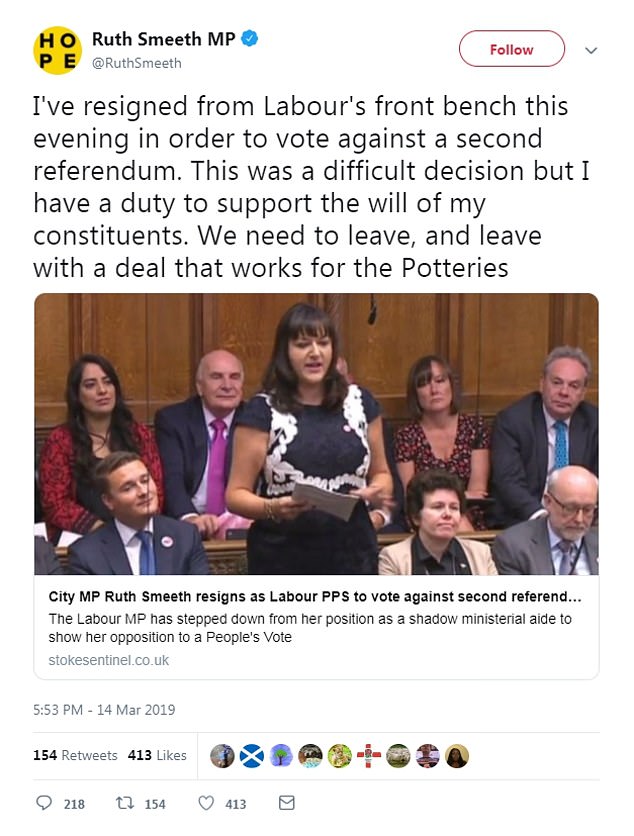 Stoke MP Ruth Smeeth was one of 17 Labour MPs who defied the whip to vote against moves to allow a second referendum. She promptly resigned from a minor shadow ministerial position 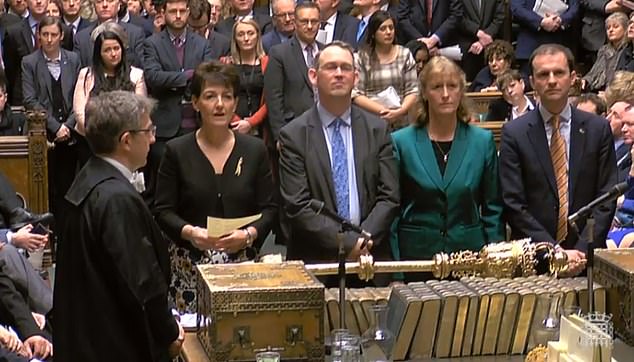 The results of the vote were announced in the House of Commons earlier, with the referendum vote losing as expected by a wide margin

Others who opposed the move included Rosie Cooper and Caroline Flint, plus hardcore Labour Brexiteers like Vauxhall’s Kate Hoey.

Shadow Brexit secretary Sir Keir Starmer had insisted earlier today – when MPs are wrestling with a delay to Britain leaving the EU – was not the time for a vote on a new public ballot.

He insisted Labour’s support for a public ballot was undimmed despite mounting criticism of the Opposition’s continued reluctance to deliver on the promise. 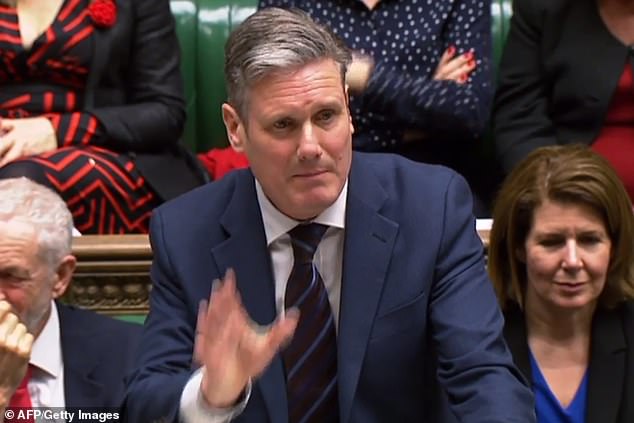 The People’s Vote admitted before the vote that Ms Wollaston’s amendment would not be backed by all of its supporters and said today was not the moment to push for a referendum.

Sir Keir told MPs before the vote:  ‘Those pressing this amendment seem to be out of step with the vast majority of co-campaigners, campaigning for exactly the same push.

‘They may genuinely have a difference of opinion but we will not be supporting H tonight.’

Former Conservative minister Anna Soubry, a leading backer of a second referendum, shouted ‘shame on you’ at Sir Keir.

‘We recognise there is a range of opinions on when to press the case for the public being given the final say, which means some of these MPs will vote for the Wollaston amendment, some may vote against, and some will abstain. 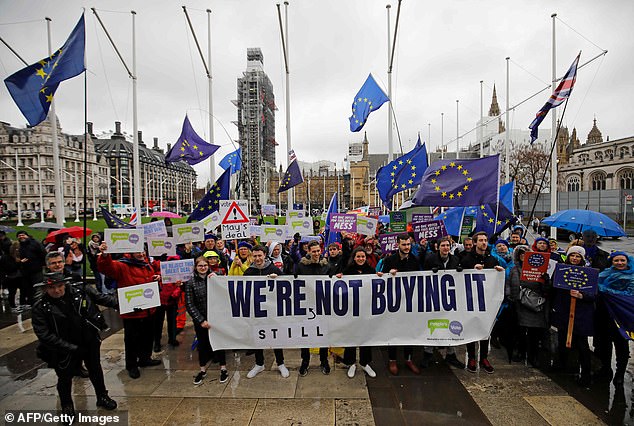 “But we do not think today is the right time to test the will of the House on the case for a new public vote.

‘Instead, this is the time for Parliament to declare it wants an extension of Article 50 so that, after two-and-a-half years of vexed negotiations, our political leaders can finally decide on what Brexit means.’

The spokesman insisted a new referendum was not ‘just another option’ on Brexit but instead a way to end the ‘crisis’.

Don't use WD-40 to relieve arthritis! But you'll be amazed what DOES cure creaky knees
Diane Abbott's son, 28, arrested over 'attack on police officers'
Kate Ferdinand breaks down in step-family documentary
Kate Middleton steps out in recycled burgundy skirt suit to visit UCL
Whisky maker is savaged after unveiling easy-drink capsules that replace traditional bottles
Princess Beatrice and Autumn Phillips wear designer coats as they head to Sandringham with Eugenie
Donald Trump claims 'the people are DISGUSTED' and fundraising is booming over impeachment
PM´s Brexit plans under pressure after Jo Johnson...