CESC FABREGAS and spouse Daniella Semaan celebrated fastening the knot with a glitzy red-carpet bash in Ibiza on Tuesday.

But this was no subdued affair for shut friends and family solely, as soccer royalty – as well as Chelsea and metropolis stars, past and gift – were attending. 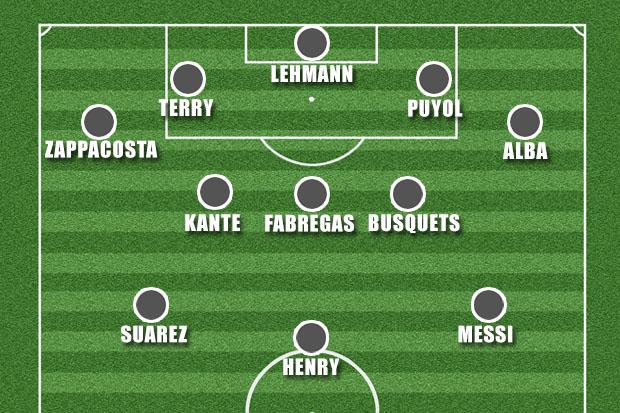 Lionel Messi and Luis Suarez were just two of the biggest names out of the Nou Camp on show.

Meanwhile, then likes of N’Golo Kante and John Terry turned up to represent the Blues in Ibiza.

With the dust settled and the hangovers from the party-goers well underway, we take a look at an all-time best XI, based on stars at the bash…

GERMANY and Arsenal legend Lehmann makes the cut as the party’s No1.

Lehmann was seen with wife Andrea at the red carpet event and makes the grade in our XI.

IN a party crammed with attacking talent, the defensive options were just as sound.

In their prime there were few better than Terry and Puyol, holding down the fort in the middle of defence.

Then there’s the intriguing, attacking full-back combination of Chelsea-Barcelona duo Zappacosta and Alba.

MIXING Barcelona and Chelsea to full effect, the trio of Kante, Fabregas and Busquets looks strong on paper.

Plenty of defence, a good amount of running and a little bit of attacking flair for good measure, they’d get the attacker well into the game.

SPEAKING of the strikers, what a trio we’ve got for you here.

Messi, Henry and Suarez, bushed their primes, would be arguably one in every of the best front threes within the history of soccer.

Combining pace, skill, determination and a true eye for goal, no defence would stand an opportunity of keeping a clean sheet against this team.