The 21-year-old looks strikingly similar to the man dressed as a policeman on the budget store’s window.

Standing with his arms crossed, the copper is next to a sign that says: “Welcome to Home Bargains. We work closely with the local police to prevent crime and ensure the safety of our customers and staff.”

Noticing the resemblance, cheeky fans grabbed the opportunity to poke fun at the handsome mode.

One said: “Ryan told me that Danny’s “modelling career” was him being the cardboard cutout they have outside Sainsbury’s and Home Bargains….is he having me on? #LoveIsland.”

Someone added: “When Danny said he was a model I think he failed to mention he does the occasional home bargains work.” 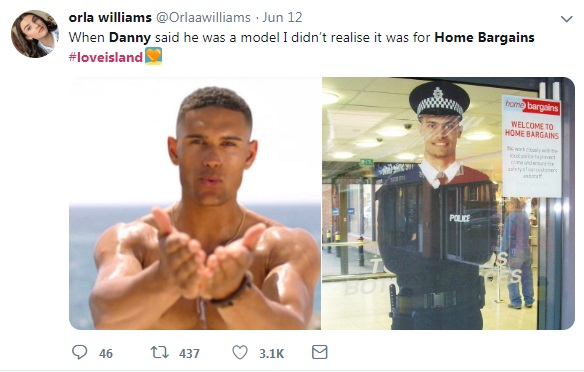 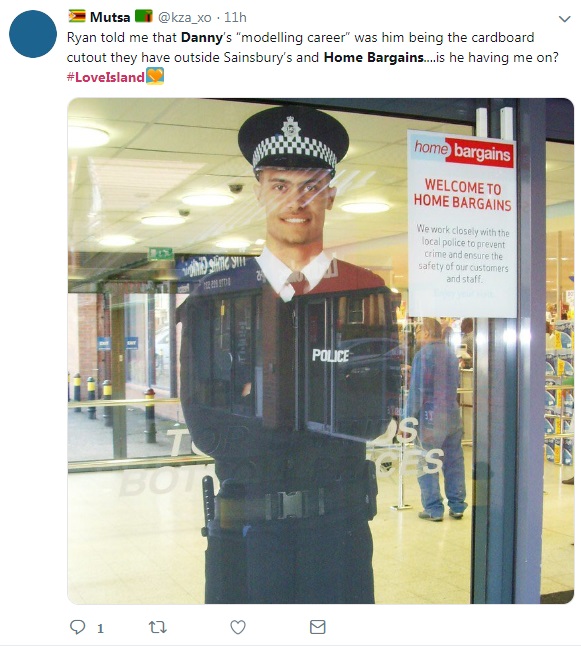 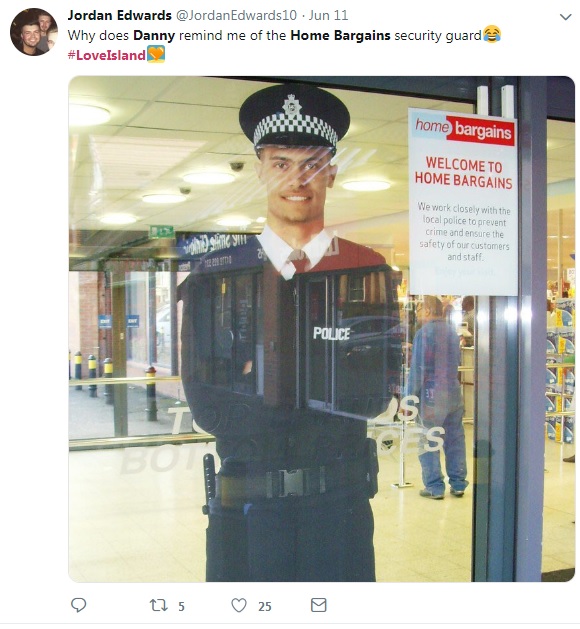 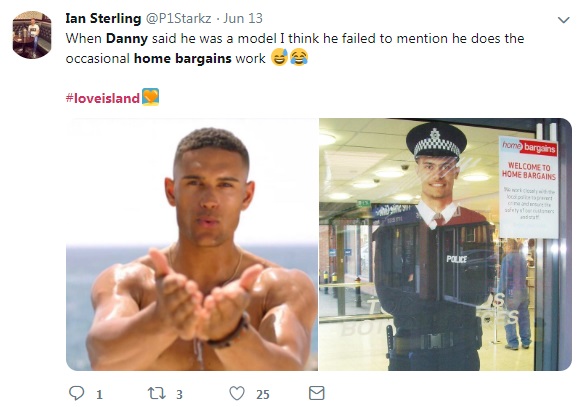 Another said: “Just met Danny from #LoveIsland at Home Bargains.”

But despite the suggestion from fans that it’s Danny, the policeman is purely a lookalike.

Instead, Danny has worked with numerous international brands including GymShark, Moschino and even starred in a Christmas TV advert for Mr. Porter’s online campaign.

He has also covered a number of popular magazines, including Desnudo Italia and Attitude’s December 2018 issue with Little Mix stars Jade Thirlwall and Perrie Edwards.

Before going in the villa, Danny said: “Being a model, there’s always fit girls around me. I don’t think I fall in love easily because I think I have quite high standards. The right girl for me has to be ambitious, independent and lots of fun.”

The pair got to know each other this week after Danny chose to take the scientist on a date following his arrival at the villa.

But Danny’s head was soon turned by Molly-Mae Hague after she confessed to him being her type.

Amy Hart wasn’t happy after she realised Molly-Mae was in pursuit of Danny despite Yewande’s feelings for him.

Their romance was rocked again after Danny was chosen to go on dates with new arrivals Maura Higgins and Elma Pazar.

Danny made clear to Yewande he was unimpressed by her and the other female Islanders making fake laughter noises as the new girls enjoyed their dates.