A MAN from Alabama contracted a rare and deadly flesh-eating bacteria after going on a weekend kayaking trip.

Ricky Rutherford, 41 from Waterloo, is currently “fighting for his life” after going on the trip with his wife, Cassey, along with their family and friends at Second Creek on July 6.

After return home he went to work but came home with a temperature of 39C (103F) and complaining of cramp in his leg.

As he works in a warehouse he just assumed he was just suffering the effects of working on his feet all day in hot temperatures, WAFF 48 reported.

He went to work again the following day but found that he could hardly walk when he got home.

When he got undressed he found that his leg was red and woollen, according to message Cassey posted on Facebook.

“We immediately went to the ER last night and they told us it was cellulitis possibly contracted from our kayaking trip Saturday and treated him with IV antibiotics and sent him home with two more.

“They told him if there was any change to come back.”

His condition only got worse though and according to Cassey his temperature had risen to 40.5C (105F) by the next day.

Cassey rushed her husband back to the emergency room at the North Alabama Medical Centre in Florence where doctors then suspected it was a flesh-eating bacteria and ran some tests.

What is necrotizing fasciitis?

It’s a rare bacterial infection which spreads quickly throughout the body and can be deadly.

Rapid treatment with antibiotics and prompt surgery are needed to stop the infection.

Dr. Karen Landers, Medical Officer for the Northern/Northeastern Districts with the Alabama Department of Public Health, said Necrotizing Fasciitis said it is a rare disease but can be very serious and prompt medical attention is needed.

Symptoms include red or purple skin in the affected area as well as severe pain, fever and vomiting.

It is not usually spread between people.

Ricky then underwent surgery and doctors removed a 5-by-6-inch chunk of his leg from his inner thigh.

Cassey said in a Facebook post: My husband is fighting for his life right now because of this horrible thing!

“What seemed like a normal fun activity that we enjoyed as a family has turned into a nightmare!”

She told the station that Ricky did not have any open cuts or scratched but said the doctors had told her that did not matter.

Cassey said: There was nothing. But the doctors told us it could be a microscopic hole that it could come into and still spread like that.

“It’s hard to believe that there was a group of us and my husband, being the healthiest immune system there, got this.

“He’s never sick. He doesn’t even have a doctor. To know that he got that when the rest of us didn’t is insane.”

Speaking to WAFF 38, she added: “I don’t want anyone else to go through this. 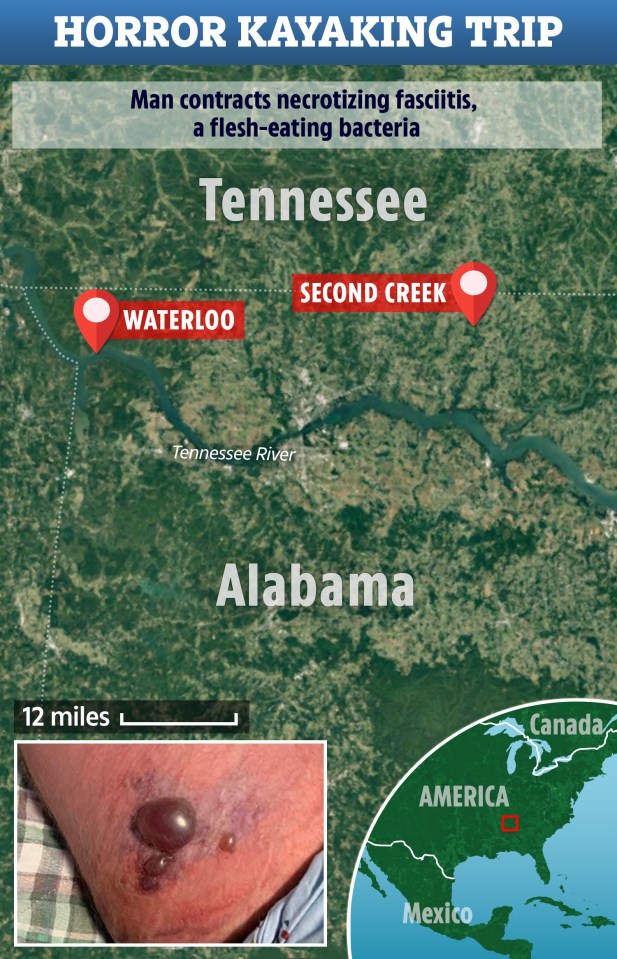 Woman, 23, crashes on motorway while being screamed at by Snapchat idiots

“On Saturday, I was having to think about burying the love of my life.

“No one should ever have to go through that. Do not get in that water! It’s not safe.

“Don’t jeopardise your family for a day of fun. It’s right here in our backyard.”

Ronaldo jets to Portugal amid war with Sarri after being subbed twice in a week as Lineker warns feu...
George RR Martin hits out at ‘traumatic’ Game of Thrones cuts as he claims show could’ve run for fiv...
Anthony Joshua incredibly UP on shock judges’ scorecard despite being knocked down FOUR times in stu...
Mark Zuckerberg launches his own PODCAST in bizarre bid to win back trust of Facebook users
Dubois vs Fujimoto LIVE: Stream free, TV channel, start time, and undercard results with Tommy Fury ...
I’m A Celebrity mystery solved after viewers point out Rita Simons seemed to get from the camp to th...
Bafta TV Awards viewers touched as Ant McPartlin takes Holly Willoughby onto the stage as I’m A Cele...
Jack Nicklaus afraid Tiger Woods will beat his record after stunning Masters win