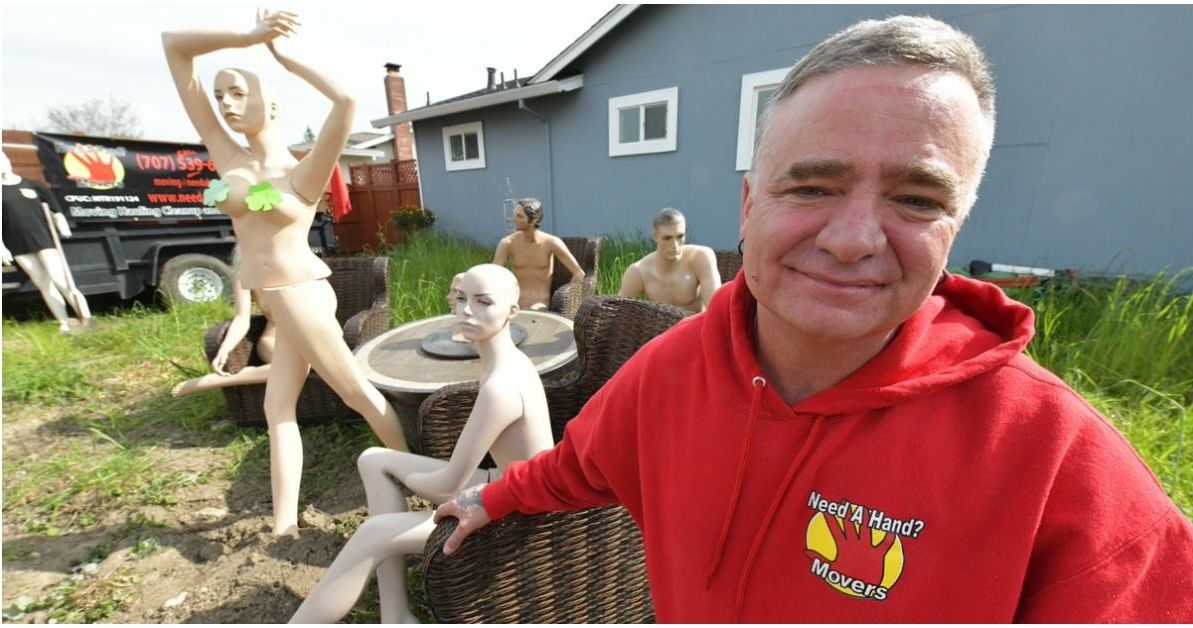 It’s not unusual for neighbors to get a little upset with each other, and disputes about fences are one of the most common reasons for homeowners to feud.

But fueling the bad blood with a nude mannequin “party” is definitely creative, and a Santa Rosa, California man deserves credit for dreaming up the bizarre idea.

Jason Windus says he set up the quirky outdoor scene after a neighbor complained that his backyard fence was too high.

Instead of getting a visit from his neighbor to find a solution, Windus says he was cited for a bylaw violation because his 6-foot fence was “blocking” a street corner and obstructing visibility.

If Windus refused to lower his fence, he was warned it would earn him a daily fine.

“It’s very serious,” he told ABC 6 about the warning. “They made me freak out.”

Windus cut his fence down to a measly 3-feet high as ordered, but then arranged a group of mannequins to lounge in the buff on his patio furniture. He says his creepy party guests are showing his nosy neighbor exactly why you build a 6-foot fence in the first place.

“They wanted me to tear down my fence to see inside my yard,” he explained. “And now they get to.”

The homeowner explained that he originally held on to the mannequins for target practice, before he was inspired to set up his garden party.

Windus even has an “invitation” to the party on display for the neighbor who complained about his fence.

He also says that his neighbors have supported him and the dummies – at least, everyone but the neighbor who complained in the first place.

While the homeowner is getting his revenge, he says he’s not happy with the new, shorter fence, because it won’t keep his two large dogs in his yard and now they’re cooped up indoors.

He hopes that staring at the mannequins day in and day out will inspire his neighbor to reconsider his complaint.

What do you think of Windus’ revenge? Should he be allowed to put his fence back up?

New Generic Insulin Costs Half As Much - But Not Everyone Will Save
Drunk Driving Remains An Epidemic Across U.S. and Canada
Prince George has 5 years old, here is the new rule that it will have to comply !
Queen Elizabeth Breaks Her Own Rule For The Sweetest Reason
People Are Mixing Milk With Coke, And No One Knows How To React
Mass Shooting In Australia: Here's What We Know So Far
Watch: Fan Steals The Show When Michael Bublé Passes Her The Microphone
Joy-Anna Duggar Expecting Baby #2