A man has been shot in front of horrified commuters at a rail station in east London.

Police and paramedics rushed to the scene at Barking station just before 11.30pm on Wednesday after officers received calls that a man had been stabbed.

Violent scenes unfolded on a tube train at the station which operates the Hammersmith and City line, the District line and other mainline services.

Witnesses at the scene said the passenger alarm was pulled when a suspect fled a train after the doors opened at the station. 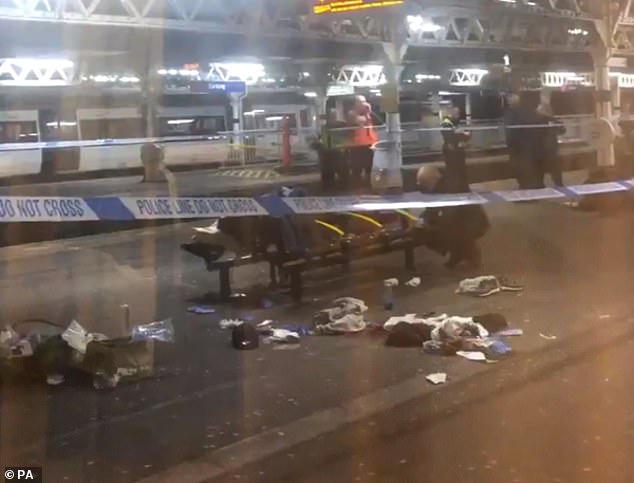 One social media user Charlotte Maher said: ‘Just witnessed a stabbing on the Hammersmith and city line at Barking station.

‘Passenger alarm pulled and a brave gentleman tripped the individual with the knife up.’

She added: ‘Suspect appeared to flee along the platform after the doors were opened, the injured individual also fled.’

The station was closed after the incident.

British Transport Police (BTP) have since appealed for witnesses to come forward and in a statement said: ‘The London Ambulance Service took the victim to hospital, where a small bullet was discovered inside his abdomen. He remains in a serious condition. 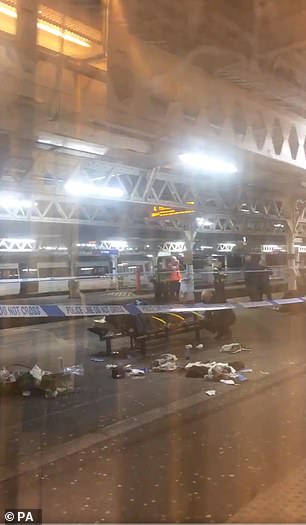 ‘It is believed there was an argument which took place on board a Hammersmith and City train between the victim and the two suspects which then moved onto the platform.

‘Following the incident the two suspects fled the station on foot. No arrests have been made at present.’

DCI Sam Blackburn from British Transport Police, said: ‘This was a violent and rare attack which took place on a late night train out of London. Officers were on scene within minutes and we are working hard to identify and trace the men responsible for this assault.

‘We understand that this was a frightening incident for passengers on the train and at the station, and would encourage anyone who witnessed the attack or the moments leading up to it to come forward and tell us what they saw.’

The incident is not being treated as terror related.

Police are asking that anyone who was at Barking train station and saw anything suspicious, to please get in touch.