V-Day heroine Margaret Keenan has returned to hospital to receive her second dose of Pfizer‘s Covid-19 vaccine after becoming the first person in the world to receive the jab.

The grandmother-of-four, from Coventry, was first in line for the vaccine when a mass roll-out began in Britain on December 8.

A week after receiving the vaccine, Ms Keenan turned 91 and encouraged others to take part, saying: ‘I would urge everybody to get their vaccine as and when they are asked to do so.’

Since then around 800,000 people have received their first dose of the vaccine, with NHS England now expecting pensioners and health care workers back for their second jab.

The second round of jabs comes as the UK recorded 53,135 cases of coronavirus in a record daily high, as health chiefs posted another 414 deaths from the virus. 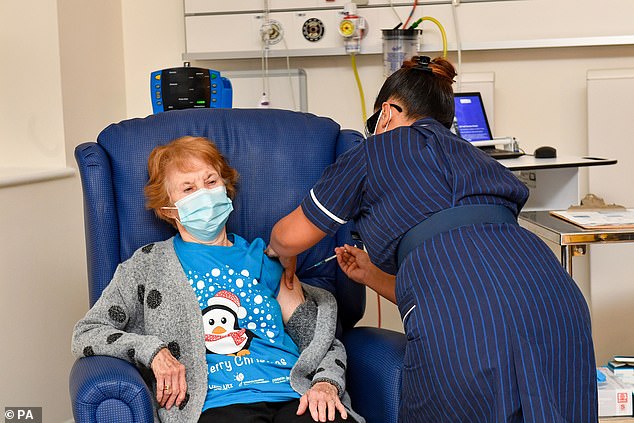 Margaret Keenan, 91, has returned to hospital today after she was the first person in the world to receive Pfizer’s Covid-19 vaccine. She will receive a booster jab to help protect her from the virus

Speaking after having the first jab, Margaret – known as Maggie – said: ‘Hopefully it’ll help other people come along and do what I did, and try and do the best to get rid of this terrible thing.’

Mother-of-two Mrs Keenan added: ‘I say go for it, because it’s free and it’s the best thing that’s ever happened.

Mrs Keenan, who has lived in Coventry for more than 60 years but is originally from Enniskillen, Northern Ireland, is now recovering well after her second jab, University Hospitals Coventry and Warwickshire NHS Trust said.

Professor Andy Hardy, trust chief executive, said: ‘We were delighted to welcome Margaret Keenan back to Coventry’s University Hospital today to safely receive the second dose of the vaccination, after she became the first person in the world to receive the Pfizer Covid-19 vaccine following its clinical approval. 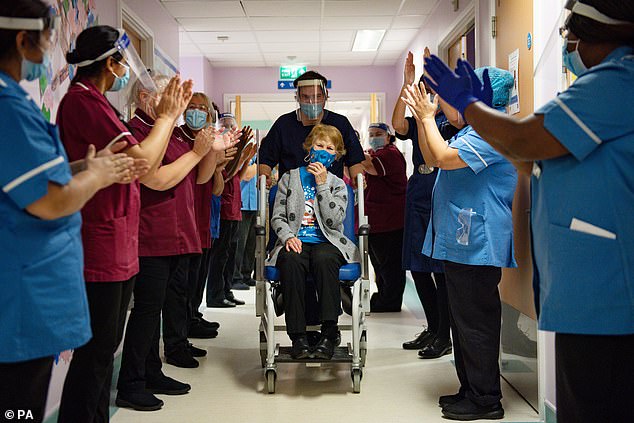 Three weeks after Ms Keenan received the jab, around 800,000 people are thought to have been vaccinated. The Coventry grandmother has urged others to receive the treatment

‘Our hardworking staff who have been involved in the vaccination programme have remained in contact with Margaret’s family since that day and we are delighted that Margaret has been continuing to recover well at home following her discharge from hospital.

‘It’s important that everyone comes forward to get the jab when they are invited to do so and, like other hospitals and GP surgeries across the country, we’ll be following the latest expert advice and evidence to invite people to get vaccinated at the time they need it.’ 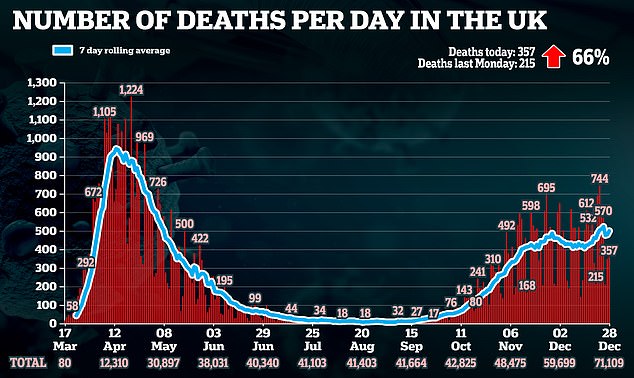 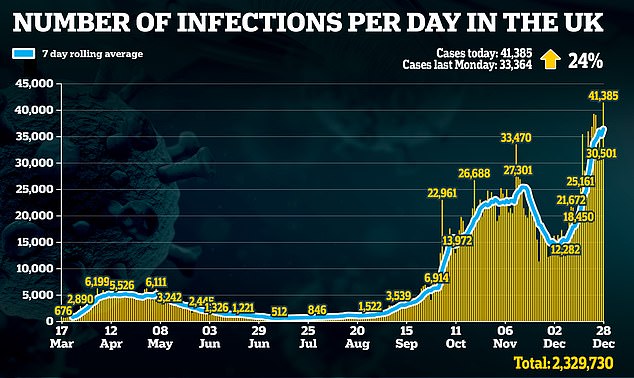 The most recent figures published by the Department of Health showed that the number of people to have had their first jab between 8 December and 20 December in the UK was 616,933.

But speaking on Christmas Eve, Prime Minister Boris Johnson said almost 800,000 people had been given their first dose of the two-stage vaccine.

Since the initial jabs were given in hospitals, the rollout has widened to GP-led sites and care homes.

The first people to receive the jabs are now returning for a ‘booster jab,’ according to NHS England, to ensure they ‘have the best chance of being protected against the virus’.

People over 80, along with care home residents, workers and NHS staff are all being prioritised to receive the jab first.

It will then become available to younger age groups and those who are also clinically vulnerable. 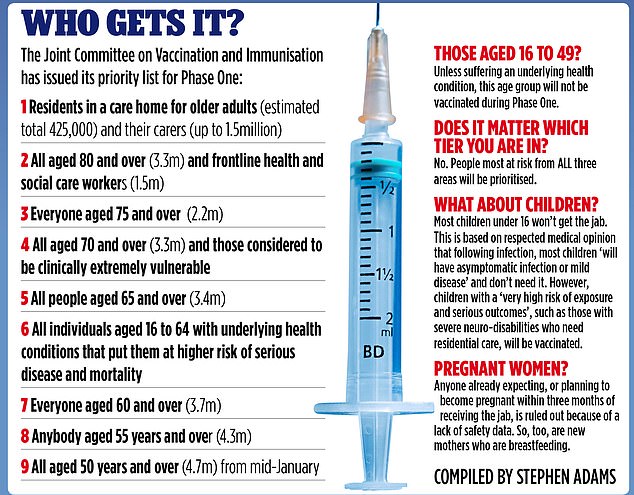 A graphic demonstrates the order of priority in which the vaccine will be rolled out, starting with residents in care homes 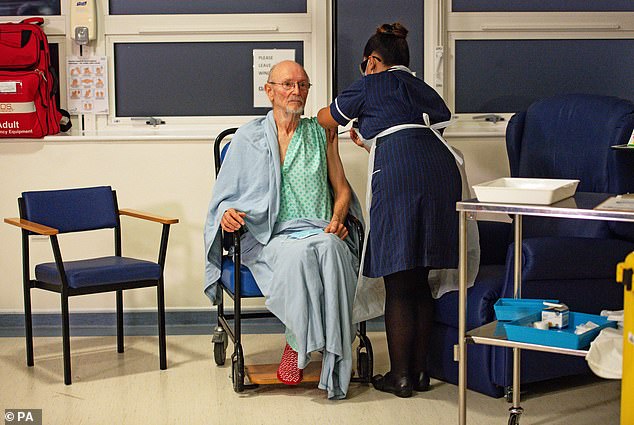 Among the others to receive a dose of the jab on December 8, now known as V Day, was Second World War Royal Navy veteran Michael Tibbs, 99, who received the dose at Queen Alexandra Hospital in Portsmouth.

Speaking at the time, Mr Tibbs said: ‘I didn’t know what to expect but it’s absolutely wonderful and feel really fortunate to have the vaccination.

‘During lockdown I have been confined to the garden, however when things get back to normal, I’m really looking forward to seeing my grandchildren and great grandchildren. The vaccine will make a difference to everybody and we are so fortunate to have the NHS.’

The first man to be vaccinated was a familiar name to many.

The 81-year-old, who goes by Bill was an in-patient at University Hospital Coventry’s frailty ward who, appropriately, is local to his namesake’s county of birth, Warwickshire. 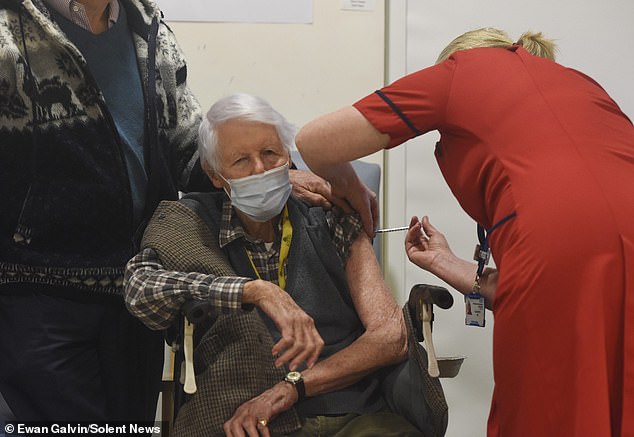 Michael Tibbs, 99, pictured being administered the COVID vaccine by Liz Rix, Chief Nurse, said he was looking forward to seeing his children and great grandchildren after receiving the vaccine

NHS staff also received the jab on December 8, as the NHS looked to protect itself from growing Covid-19 cases.

Joanna Sloan, 28, sister in charge of the team of vaccinators for the Belfast Health and Social Care Trust, said it felt like she had cleared the final hurdle.

The nurse, from Dundrum in Co Down, said: ‘I feel privileged and honoured and a little bit emotional that we have got here – very, very grateful.’

As the vaccine was administered, she said she was thinking: ‘At last – we are here.’

Ms Sloan added: ‘Through everything that healthcare workers (went through), either in hospital or (the) community – people themselves losing family members, us losing colleagues – it felt like it was a huge moment and that this was and could possibly be the final hurdle in the fight against Covid.’ 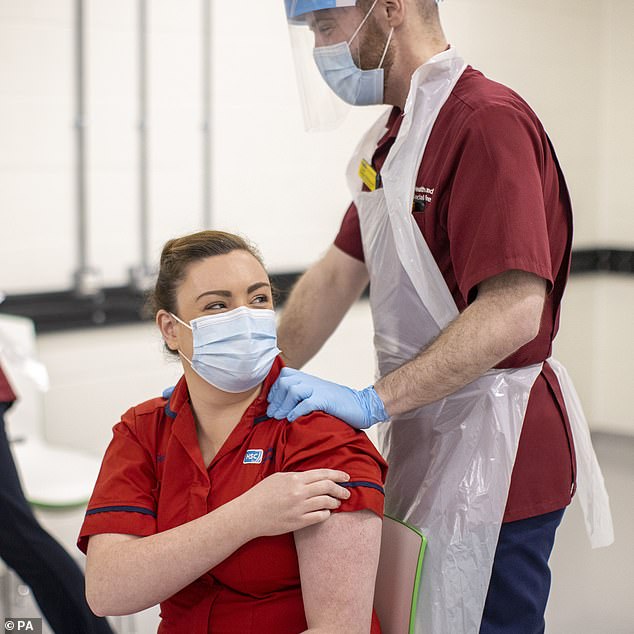 Sister Joanna Sloan is congratulated by her colleague Conor McDowell, as she becomes the first person in Northern Ireland to receive the first jab

Mrs Keenan was one of about 100 people vaccinated on the first day of the rollout at Coventry.

Responding to the second round of injections today, Mr Hancock said: ‘Fantastic to see Margaret Keenan receive her second dose of the @Pfizer/@BioNTech-Group #coronavirus vaccine.

‘We will get through this pandemic, together.’

A Welsh Government spokesman said people in Wales would begin receiving their second dose of the vaccine from January 5. 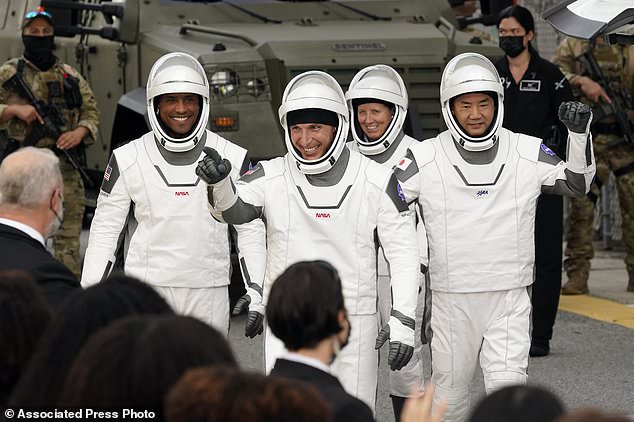 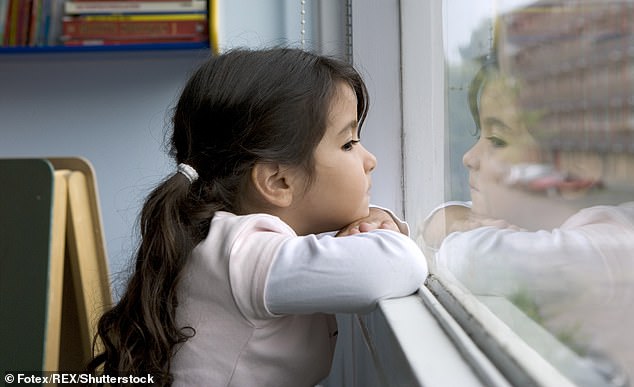 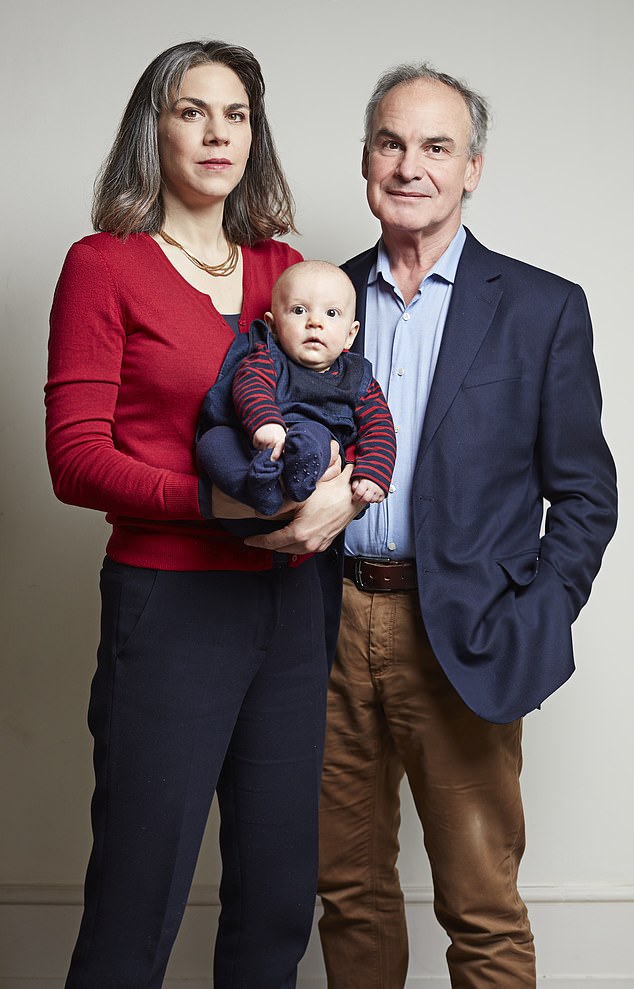 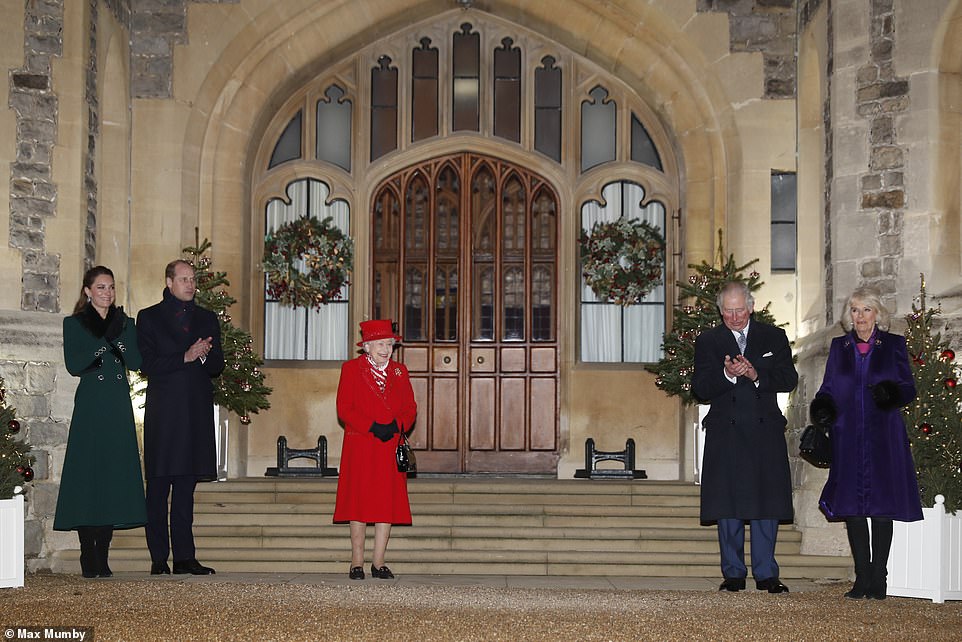 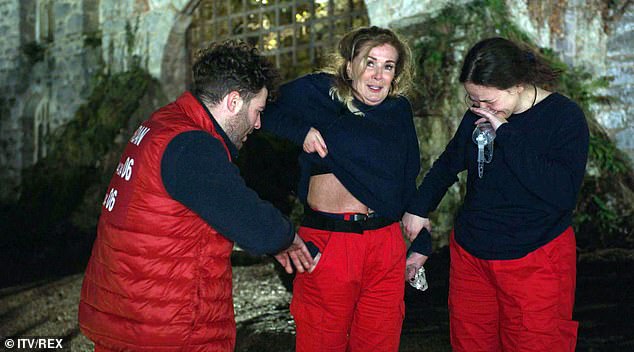 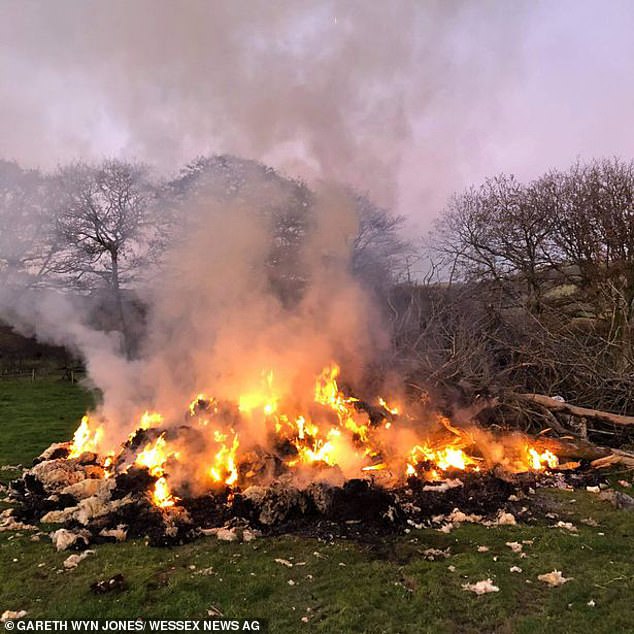