MCFLURRIES contain less ice cream than they should, a new investigation has found.

Regular 150g McFlurries at McDonald’s, which cost 89p, can contain up to 30 per cent less ice cream than the chain promises, the findings showed.

The investigation was carried out by Channel 5’s consumer show Shop Smart Save Money for Christmas, which airs tonight at 8pm.

Researchers bought six McFlurries in the 150g Regular and 75g Mini sizes from different branches to find out if you really get the amount of ice cream that McDonald’s promises.

It found that five out of the six regular McFlurries they bought were under-filled.

A McDonald’s spokesman said that customers should talk to a member of staff if they feel like their McFlurry has been under-filled. 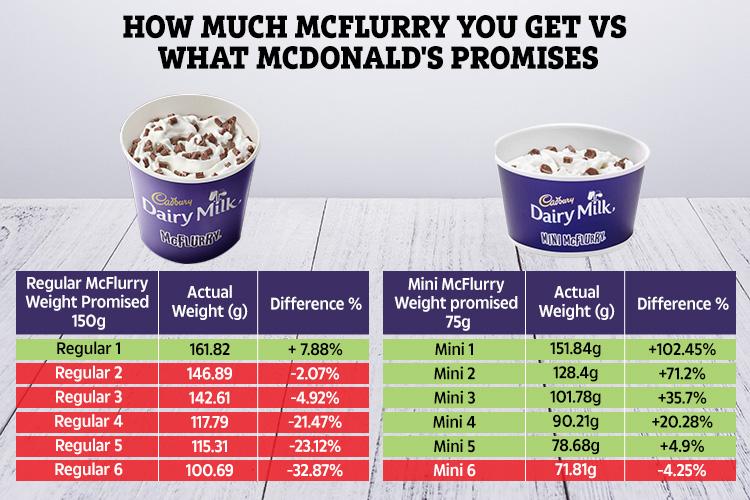 One only contained 100g of ice cream – a third less than it should contain.

Only one contained more filling than promised at 161g.

Mini McFlurries – which are 30p cheaper than a Regular at 59p – are much better value, the research found.

Five out of six ice creams bought from three different branches were over-filled.

One contained a whopping 150g of ice cream – the same amount as in a regular McFlurry and double the amount it should contain.

The team was led by presenter Alexis Conran.

Black Friday 2018 Pro Direct deals: the top offers to look out for on November 23

The researchers bought two Mini McFlurries at 59p and two Regular McFlurries, costing 89p each, from three different branches of McDonalds without topping.

They weighed them in lab conditions at Leeds Beckett University School of Clinical and Applied Sciences.

A McDonald’s spokesman said: “We have strict operational procedures and training in place to ensure that our McFlurries are filled adequately based on the size which has been ordered.

“If any of our customers have any concerns about the amount they have been served, we would encourage them to talk to our team in the restaurant.”

And this year, McDonald’s is doing a Millionaire’s Latte for Christmas.

We pay for your stories! Do you have a story for The Sun Online Money team? Email us at money@the-sun.co.uk or call 0207 78 24516. Don’t forget to join the Sun Money’s Facebook group for the latest bargains and money-saving advice.