RAPPER Meek Mill has praised “judges for their wisdom and transparency” after being granted a new trial on 2008 drugs and weapons convictions.

Thanking Jay-Z, family and his lawyers, he said: “The past 11 years have been mentally and emotionally challenging, but I’m ecstatic that justice prevailed.”

Mill, a rap artist from Philadelphia – and an advocate for reform of the US criminal justice system – is entitled to a new trial on drugs and weapon charges that have kept him on probation for a decade, a Pennsylvania appeals court ruled on Wednesday.

Overturning the rapper’s conviction, a three-judge Pennsylvania Superior Court panel agreed that Philadelphia Judge Genece Brinkley, who presided over a 2008 trial that resulted in his conviction, was no longer impartial, as Meek Mill’s attorneys have argued.

It ordered a replacement for Brinkley in the case.

After the sentence, Meek Mill, an African-American whose given name is Robert Rihmeek Williams, became a cause célèbre for musicians, celebrities and criminal justice reform campaigners who said his case was typical of a American legal system that treats minorities unjustly.

The sole witness against Meek Mill at his 2008 trial was a discredited Philadelphia narcotics squad officer who is no longer with the city’s police force. 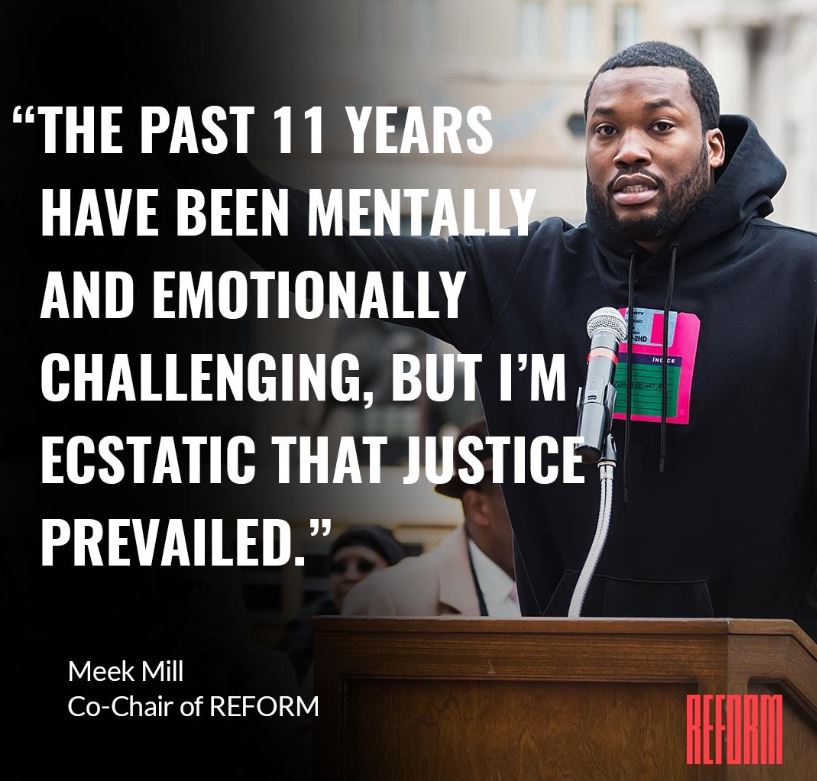 President Judge Jack Panella wrote in an 18-page opinion: “Williams’ right to be tried before an impartial judge is necessary in this case because the trial judge heard highly prejudicial testimony at the first trial, which was a bench trial, and made credibility determinations in favour of a now discredited witness and against Williams.”

In November 2017, Brinkley sentenced the rapper to up to four years in prison, saying a pair of arrests violated probation conditions she set following his 2008 convictions.

He served five months before the state’s top court granted him bail.

Neither of the arrests, including one that according to local media stemmed from a dirt bike stunt in New York, resulted in convictions.

Mill said on twitter: “The past 11 years have been mentally and emotionally challenging, but I’m glad that justice prevailed and my clean record has been restored.”

He added: Unfortunately millions of people are dealing with similar issues in our country and don’t have the resources to fight back like I did.”

The Philadelphia District Attorney’s Office said in a statement it welcomed the appeals court decision and was reviewing its options regarding a new trial.

Chuck Peruto, an attorney for Judge Brinkley, said it was unusual for the district attorney to agree that a defendant deserves a new trial. Brinkley stands by her handling of the case.

Mill’s song “Going Bad,” on which he collaborated with Drake, hit No. 6 on the U.S. charts this year. His other hit songs include “All Eyes on You,” and “Dangerous.”

Child rapist forced victims to wear nappies and shared sickening photos of abuse with other paedos
Worcester acid attack – Chilling words screamed by mum as three-year-old son doused in acid with fou...
Everyone over-40 could face higher taxes to help fund cost of their social care in old age
Dogs have stomachs pumped after eating drug-laced marshmallows scattered around village
Who is Sanjeev Bhaskar? Unforgotten actor who plays DS Sunny Khan and Goodness Gracious Me star
The Queen ‘will abdicate in three years aged 95 allowing Prince Charles to reign’
Wayfair launches Summer sale and with beds from £149 – but deals are only available this week
Dad-of-two, 56, kills himself after laser eye surgery caused him 20 years of agonising pain