The Duchess of Sussex, 38, took to the Sussex Royal Instagram account on Monday night to share the post – which shows her on a tour and visiting troops in Spain, Italy, Turkey, Afghanistan and the UK in 2014.

The photos, which have already have had 20,000 likes, include her posing in front of a crowd full of troops and another of her giving a serviceman a medal.

The post said: ‘Today is Remembrance Day and also Veterans Day in the United States, a day to honour those who have bravely served in the Armed Forces.’ 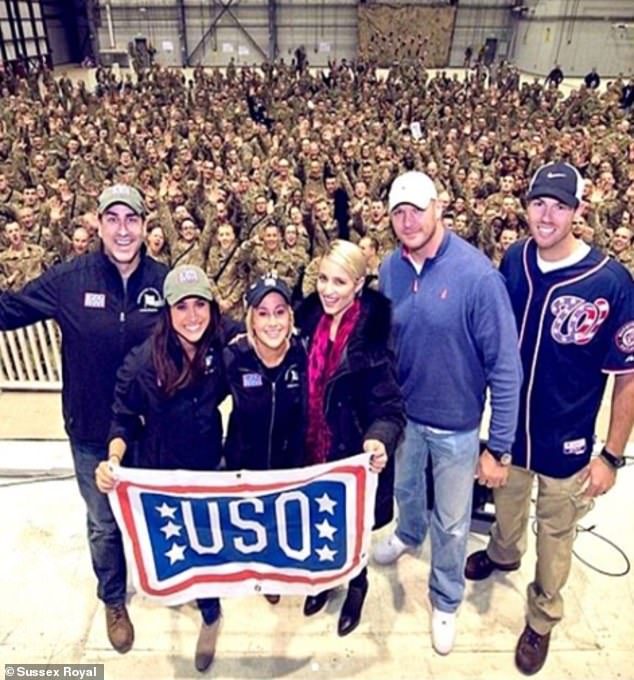 The photos, which have already had 20,000 likes, include her posing in front of a crowd full of troops and another of her giving a troop a medal 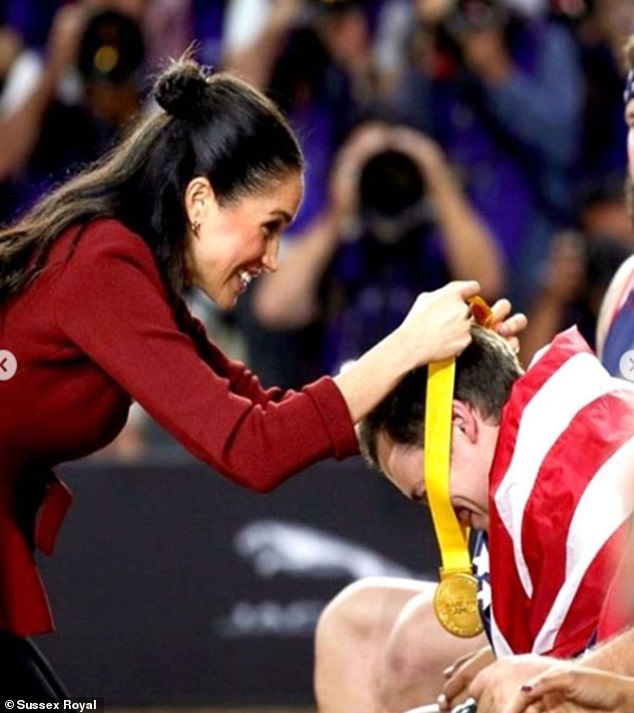 The Instagram post, which also showed a picture of a young girl in the arms of her father with a banner saying ‘Welcome Home Daddy’ went on to say: ‘Thank you to all, for your service, sacrifice and commitment. It has been an important week to recognise those who serve (and have served) as well as to acknowledge their families.

Explaining the context of the photos more the post said: ‘In 2014, The (now) Duchess of Sussex proudly went on tour with the Chairman of The Joint Chiefs of Staff, visiting troops in five countries: Spain, Italy, Turkey, Afghanistan and the United Kingdom.

‘During this tour, The Duchess met with service personnel and their families and she was proud to recognise their service to the country.

At the time of the tour the Duchess said: ‘I have always had such a profound respect for our nation’s troops and military families. I cannot thank them enough for everything they do for us.’ 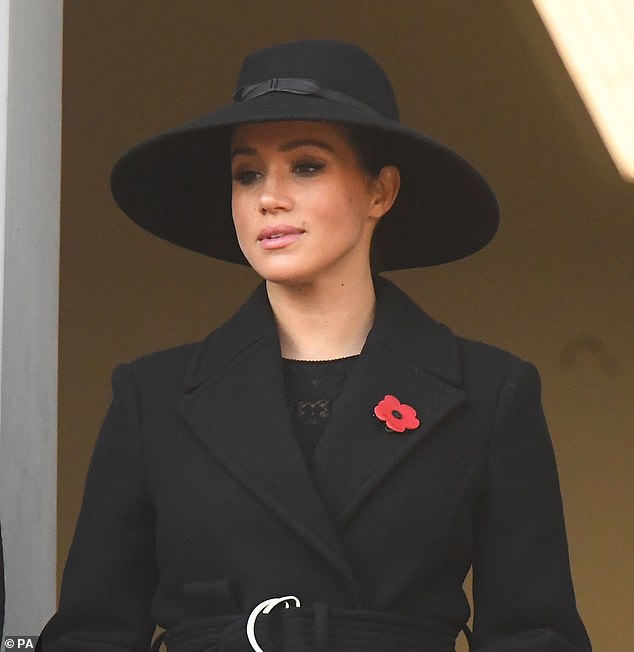 The group went on the tour with the then-Chairman of the Joint Chiefs of Staff, Martin Dempsey, and visited the five countries while meeting troops and their families.

Meghan met more than 1,400 servicemen during the 2014 Christmas tour, designed to give a much-needed break to troops by giving them an opportunity to meet some of their favorite stars. 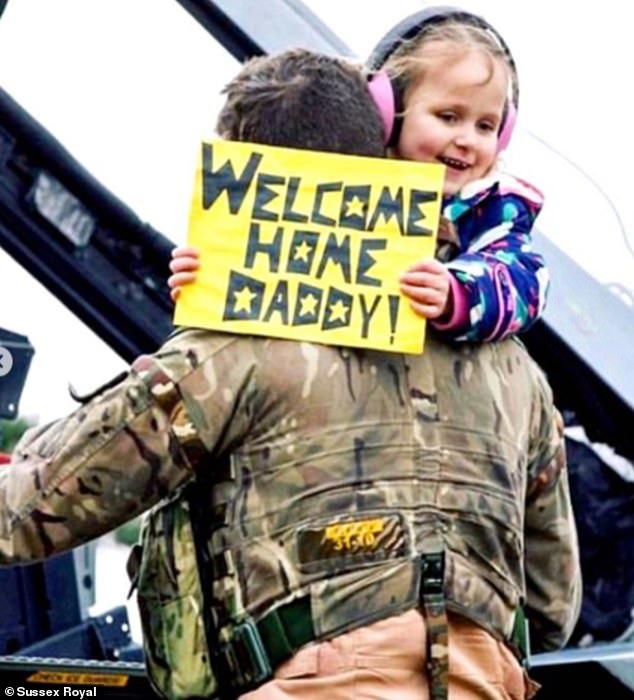 The Instagram post, which also showed a picture of a young girl in the arms of her father with a banner saying ‘Welcome Home Daddy

Meghan joined other members of the royal family yesterday to mark remembrance Sunday and watch the traditional wreath-laying service at The Cenotaph.

Meghan and the Duchess of Cambridge, 37, both opted for a black coat and hat, as they stood on the balcony to watch Prince Charles, Prince William and Prince Harry lay wreaths to pay respects to its war dead today.

Meghan and Kate were pictured on separate balconies, with Kate joining the Queen, 93, and Duchess of Cornwall, 72, while Meghan joined Sophie, Countess of Wessex, 54, in order of precedence.

The Prince of Wales laid the first wreath on behalf of the Queen, who watched the service from the nearby balcony. 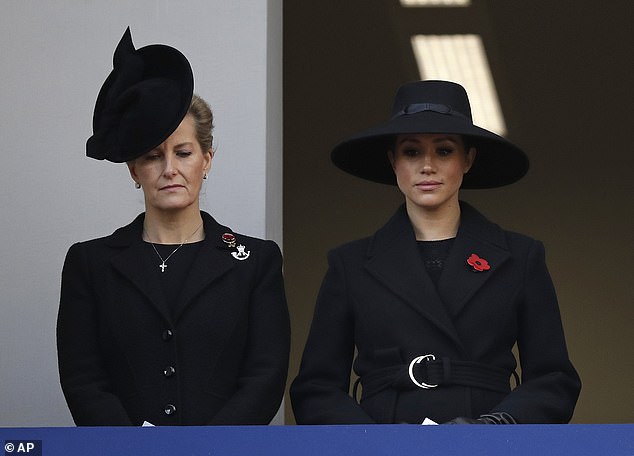 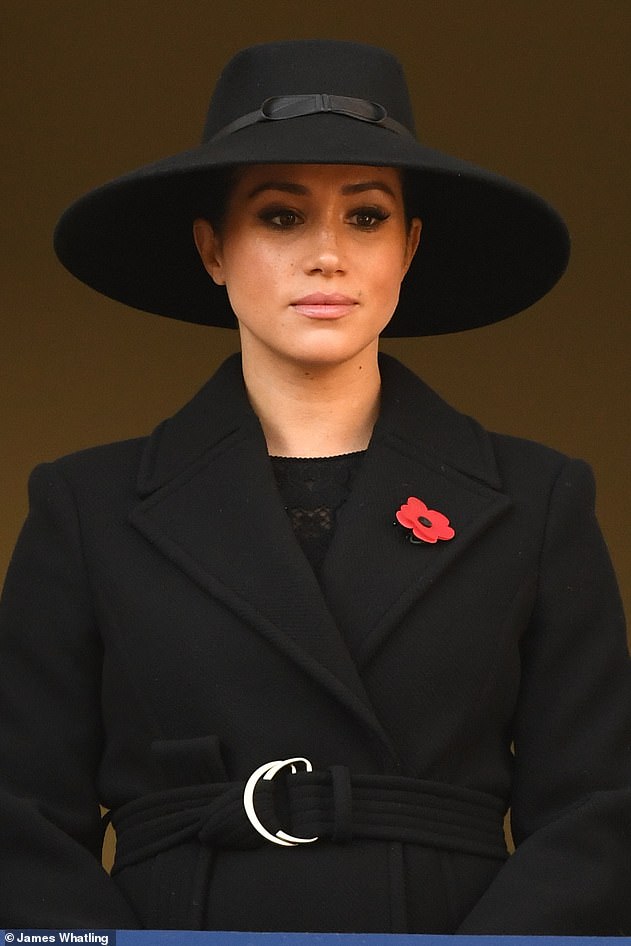 Meghan opted for wide brim hat with a leather ribbon, which she teamed with a black £1,545 belted wool coat by Catherine Walker & Co adorned with a poppy.

Opting for natural make-up and no jewellery, Meghan cut an elegant figure as she watched the ceremony.

At 11am, a two minutes silence was observed, with its beginning and end marked by the firing of a gun by the King’s Troop Royal Horse Artillery.

An equerry laid a wreath for the Duke of Edinburgh, who retired from royal duties two years ago.

The Duke of Cambridge and the Duke of Sussex followed their father in laying wreaths, while their wives also watched the ceremony from balconies. 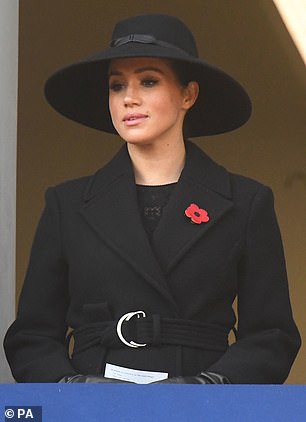 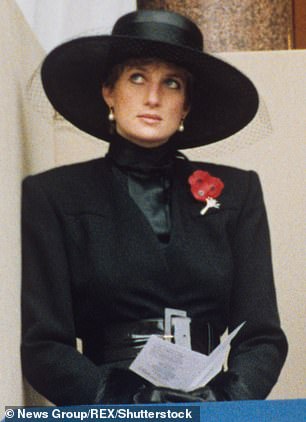 Touching tribute: Meghan Markle (left), 38, channelled Diana in an all-black ensemble when she joined senior royals for the Remembrance Sunday commemorations at the Cenotaph. The outfit looked strikingly similar to one the Princess wore to the Cenotaph in 1991 (right)

Meghan channelled Diana in an all-black ensemble when she joined senior royals on Sunday.

The outfit looked strikingly similar to one the Princess wore to the Cenotaph in 1991.

Both the hat and the coat were reminiscent of those worn by Princess Diana to the same event 18 years prior. The Princess was 30 years old at the time.

It is not known who designed Diana’s outfit, but the coat featured a similar oversized belt buckle and the shape of the hat bears more than a passing resemblance.

While Diana chose to accessorise the outfit with a tasteful pair of pearl drop earrings, Meghan opted to go without. 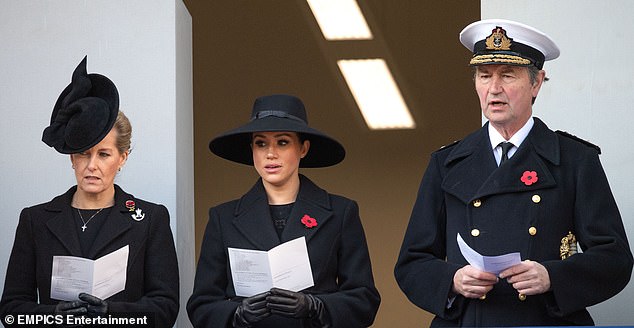 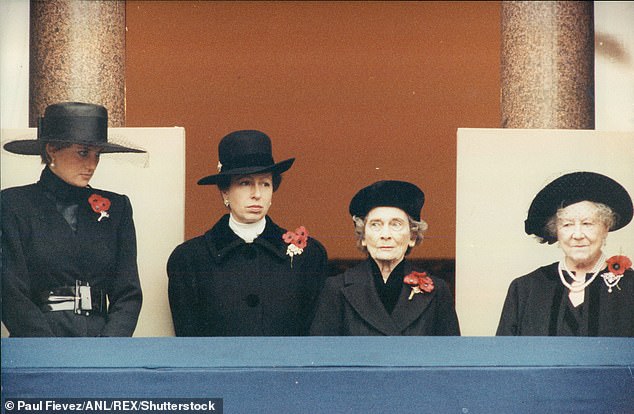 Diana (pictured far left), Princess Of Wales, with (pictured left to right) Princess Anne, Duchess Of Gloucester, and the Queen Mother, in London, in 1991, during the Remembrance Day event. The shape and style of Diana’s coat and hat are similar to those worn by the late Princess

Speaking to FEMAIL, stylist Susie Hasler, who runs Styled By Susie, said it was a ‘great’ way for the Duchess to keep Diana’s memory alive.

She said: ‘Diana influenced a generation of women with her personal style, even down to her wedding dress.

‘She remains one of the most influential style icons and it’s great to see Meghan keeping her memory alive with a near identical look.

‘As always, Meghan is great at enhancing her hourglass figure with a waist cinching belt, and this is a brilliantly conservative, yet impactful look as always.’

This weekend is the first time the couples have been seen together since Harry and Meghan addressed the pressures of being in the public eye.

Could petrol hit $2 a litre? 'Perfect storm' could see fuel surge to record highs
JOHN GRAY: Jeremy Corbyn has nothing but contempt for working people
Jeffrey Epstein abused girls 'with Ghislaine Maxwell's help'
Russian submariners who died in fire 'sacrificed themselves to save top-secret vessel'
Woman lays on a bed covered with dozens of fluffy kittens as they climb all over her
A personal portrait of John Humphrys reveals he's changed more nappies than most women
'Credible evidence' Mohamed bin Salman was responsible for Khashoggi murder
Controversial study finds that brain differences between the sexes begin in the womb