It has been a little-known part of her intriguing family history… until now.

The Duchess of Sussex has spoken of her special feelings for Malta and its people and revealed that her great-great-grandmother was born there.

Now the Daily Mail can fill in some of the missing pieces in her connection to the Mediterranean island – and to Windsor Castle. This week, a picture of her emerged wearing a ghonnella, a traditional Maltese cloak. 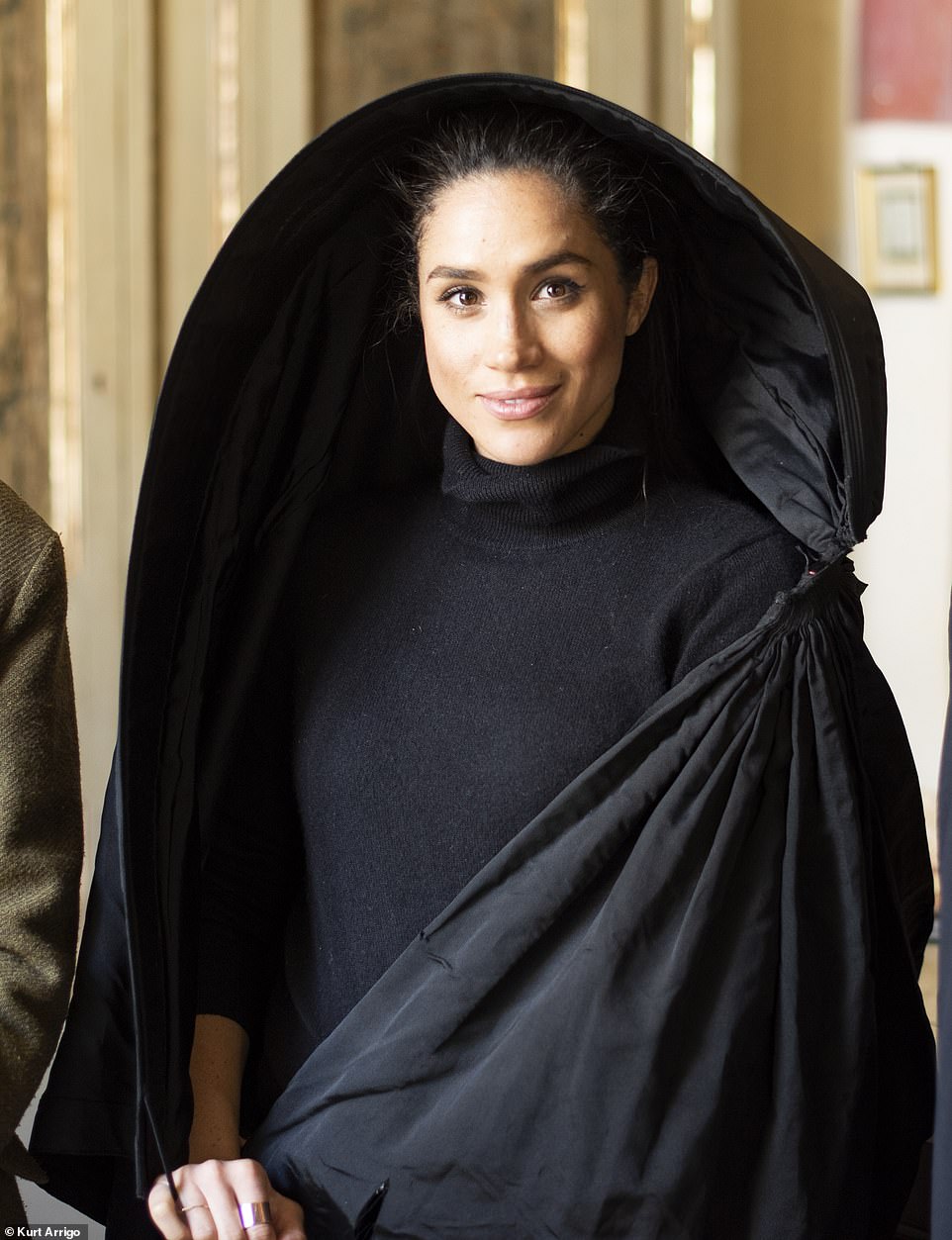 It was taken when Meghan Markle, then a US actress, made a trip there in 2015 – the year before she met husband Prince Harry. She sampled the food and posed for pictures. In a candid interview, she said the trip was ‘about trying to understand where I come from’ and ‘fitting in a piece of the puzzle’.

According to research carried out by the Daily Mail, the tale of her link to Malta begins in mid-19th century Ireland with her great-great-great-grandmother Mary Bird, nee Smith.

Having moved from Ireland, Mary is thought to have worked in the kitchens of Windsor Castle as a teenager, around 160 years before Meghan married there. 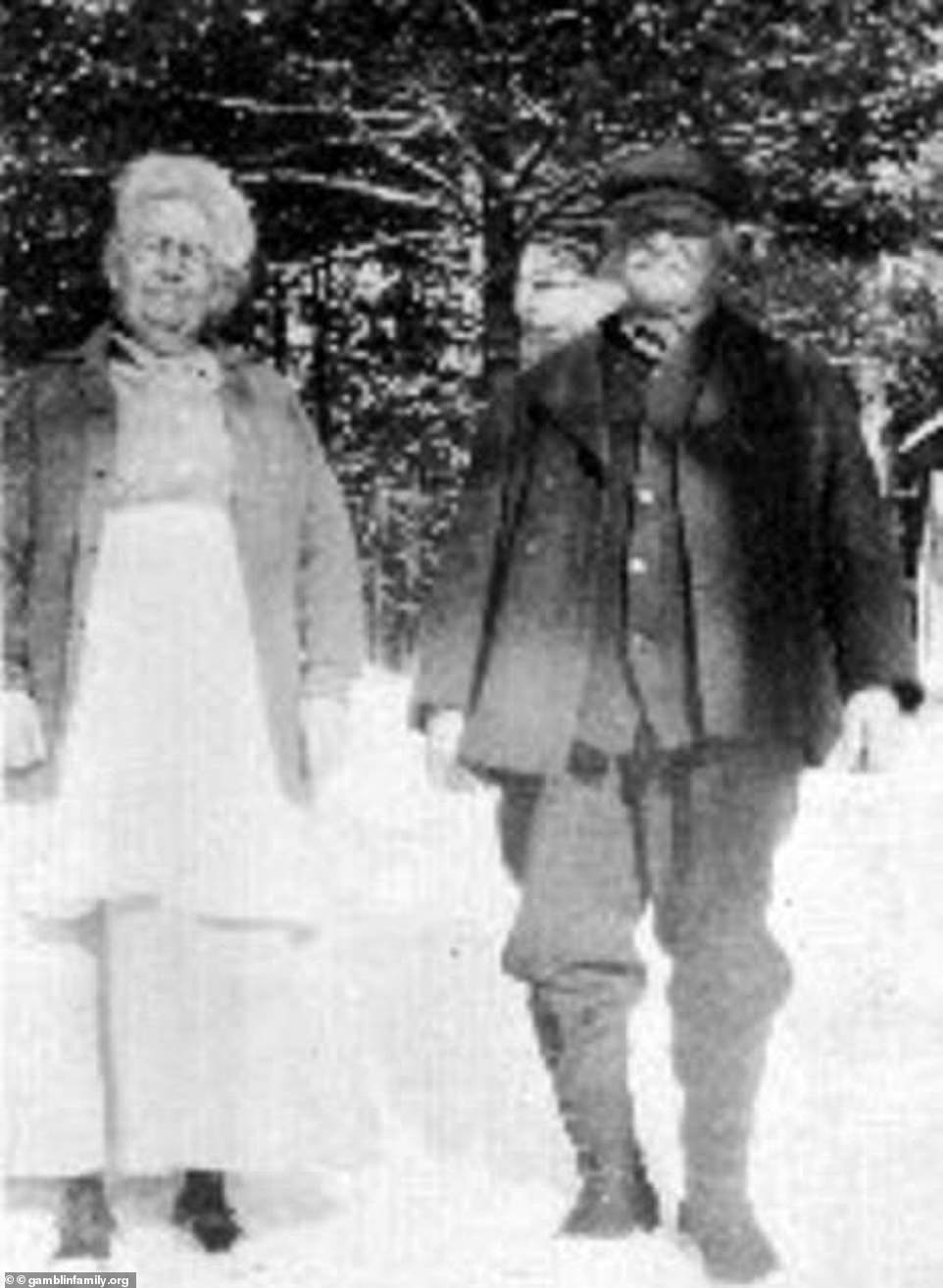 George Merrill (right) was born in the state to parents who were born there too, and lived with his British-born wife Mary Bird (Left) George David Merrill – born July 25, 1861

Mary married Irish shoemaker Thomas Bird, a decorated British Army officer with the 2nd Cheshire foot regiment who served in Ireland and India. The couple moved to Malta with the Army. They had two children on the island, including Meghan’s great-great-grandmother Mary in 1862.

The family spent 20 years in Malta, which at the time was thriving culturally and economically as a key stop on the trade route from Britain to India. 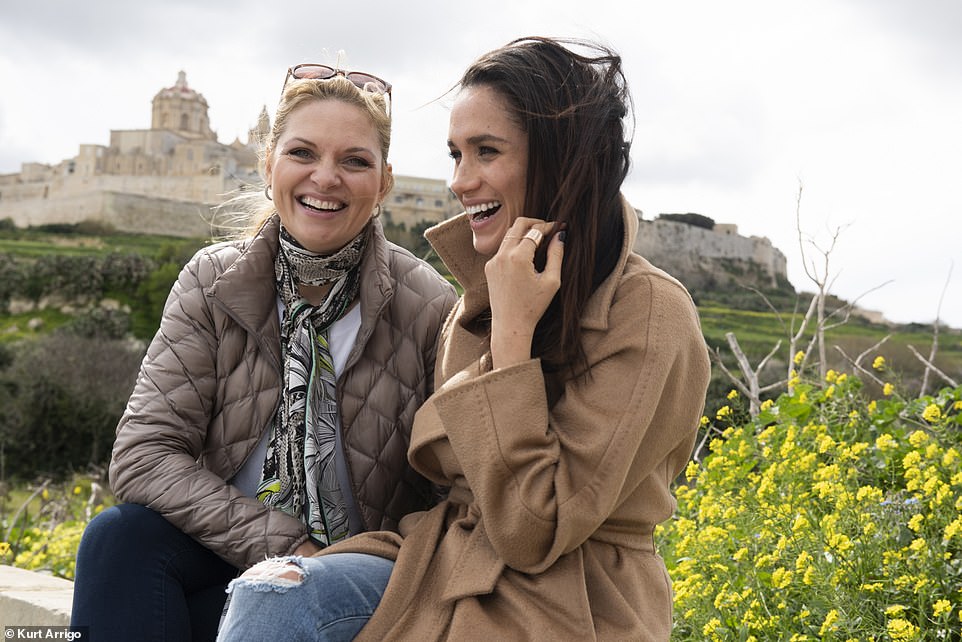 Meghan, then an up-and-coming actress, spent a few days in the country soaking up the local culture and learning about her ancestry 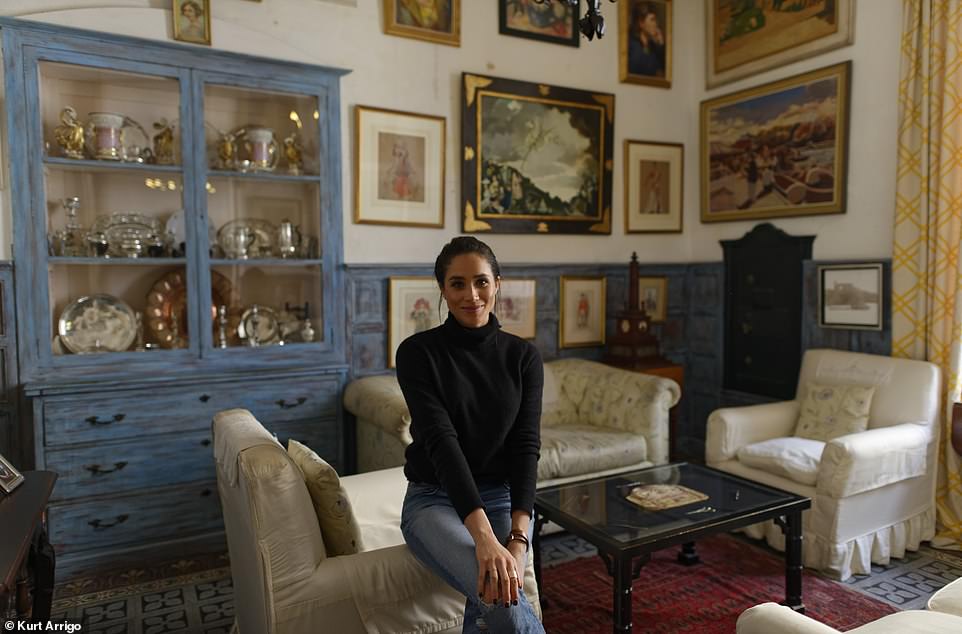 In 1907, Gertrude married Frederick Sanders and they had four children, including a daughter Doris in July 1920. In March 1941, Doris Sanders married gas station owner Gordon Markle. In 1944, they had a son Thomas Markle – Meghan’s controversial father.

Prince Harry shares a connection with Malta. His grandparents lived there from 1949 to 1951 when Prince Philip was First Lieutenant on HMS Chequers and took his wife, then Princess Elizabeth.

Meghan visited the island three years ago when she took part in a photoshoot for Elle UK magazine. She described the ‘bucolic bliss’ of the Maltese countryside in an Instagram post at the time. 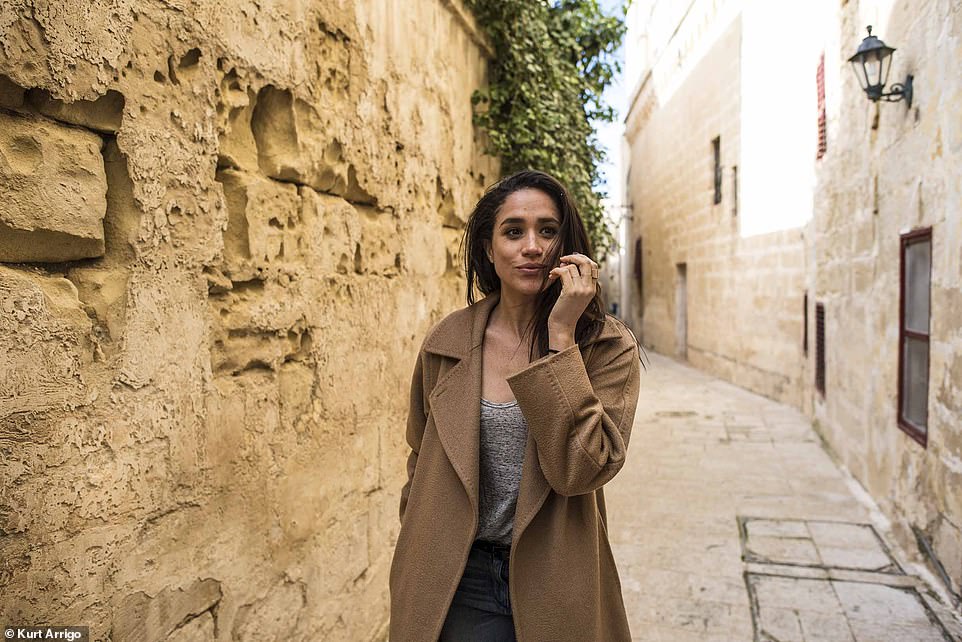 The island is clearly important to her – the Maltese rock-centaury was among the national flowers embroidered on her wedding veil in May. Meghan said in the 2015 interview: ‘To come somewhere where you so quickly settle in to feeling welcomed is really special… I started to say, ‘Oh my gosh I do sort of blend in’.

The photo of Meghan in a cloak was posted online this week by Majesty magazine and printed in yesterday’s Daily Mail.

Malta has a special place in Meghan’s heart as her great-great-grandmother Mary was born there 1862, and the future royal confessed to feeling a special connection with the Commonwealth nation.

According to local news sites, Meghan visited Mdina, Valletta, Victoria and Dwejra during her brief stay, during which she took part in a shoot for glossy fashion magazine ELLE UK.

The Suits actress was in Malta to learn more about her ancestry and sample Maltese food and wine, according to 89.7 Bay – and later confessed she ‘blended in’ with the locals.

Meghan said at the time: ‘Coming to Malta has been really important to me because my great-great-grandmother lived here, so we’ve been trying to trace the ancestry.

‘This trip was mostly about trying to understand where I come from, my identity. There is something so lovely about fitting in a piece of the puzzle.

‘Before I came, people were telling me, “When you go to Malta, everyone will look like you,” and I started to say, “Oh my gosh I do sort of blend in,” and it’s the loveliest feeling. The Maltese people have been so kind.’

In an interview during her stay, she said: ‘In Gozo I loved the fresh goat’s milk cheeses, particularly the pickled ones with the black pepper on them.

‘I’m about to have the spaghetti with rabbit, which I’ve been waiting to try. This morning, for breakfast, I tried the pastizzi with peas and ricotta. Oh my goodness they’re delicious! So my suitcase will be filled with all sorts of Maltese treats.’

Meghan also described the ‘bucolic bliss’ of the Maltese countryside in an Instagram post written at the time.

It is believed the remarkably candid snaps were taken in March 2015 – just four months before she met Prince Harry and eventually swapped the showbiz world for Kensington Palace.

Casually dressed in a grey t-shirt and baggy jeans, the future Duchess of Sussex looks decidedly happy and carefree in the images.

She appears to be wearing her beloved £1,600 MaxMara ‘Manuela’ Coat, which has not seen the light of day since Meghan became a fully-fledged royal.

One photo sees her with the Marquis de Piro and his wife Frances at their home Casa Rocca Piccola, while dressed in a traditional għonnella headdress.

The rare images came to light after being tweeted by Joe Little of Majesty magazine earlier this week.

He wrote: ‘In Valletta on Saturday I was shown this pic of the then Meghan Markle with the Marquis de Piro and his wife Frances during her visit to the island in 2015.

‘Meghan, whose great-great-grandmother was born on Malta, wears the għonnella national head-dress. #duchessofsussex.’

Prince Harry also shares a connection with Malta, as his grandparents lived there in 1949 when Prince Philip was made First Lieutenant on HMS Chequers.

The Queen’s friend and bridesmaid Lady Pamela Hicks told the Mail: ‘The Princess really loved Malta because she was able to lead a normal life, wander through the town and do some shopping.

‘It was the only place that she was able to live the life of a naval officer’s wife, just like all the other wives.’

Tiger Woods' girlfriend Erica celebrates after first win in five years
Britain named third best place in the world to work in survey of 22,000 expats
Woman, 19, suffers a second-degree burn after her generic iPhone charger sparked with her necklace
Aid workers reach remote Syrian camp for 1st time
Spice Girls reunion tour: Geri Horner, Mel B, Emma Bunton and Mel C take to the stage at Dublin
Tesco is mocked over a snap of Christmas chocolates display
Billionaire Harry Macklowe marries mistress after erecting billboard of their faces on Park Avenue
The 12-year-old who has made the final of TV's Child Genius