Melania Trump brushed off criticism from the public and the media and said she always strives to do what she believes to be the ‘right’ thing in an interview with Fox News host Sean Hannity on Wednesday night.

The first lady sat down with the primetime Fox News host aboard the USS George H.W. Bush after a day of visiting with troops at Joint Base Langley in Hampton, Virginia.

The cordial interview covered a number of different topics from Melania’s impression of the massive boat named for H.W., who was laid to rest last week, to how she deals with criticism of her husband and her family.

While most of her answers were confident and composed, Melania pulled back when asked about her husband pursuing a second term in the Oval Office.

Instead of the simple ‘yes’ that would have been expected, she responded: ‘I think my husband is doing an incredible job’ and said ‘I want the country to continue to do well.’

Hannity steered clear of more hard-hitting topics that have dominated the news cycle, the most notable being the sentencing of President Trump’s former personal lawyer Michael Cohen earlier in the day. 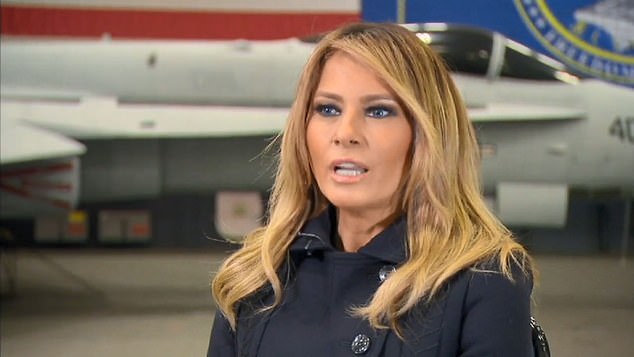 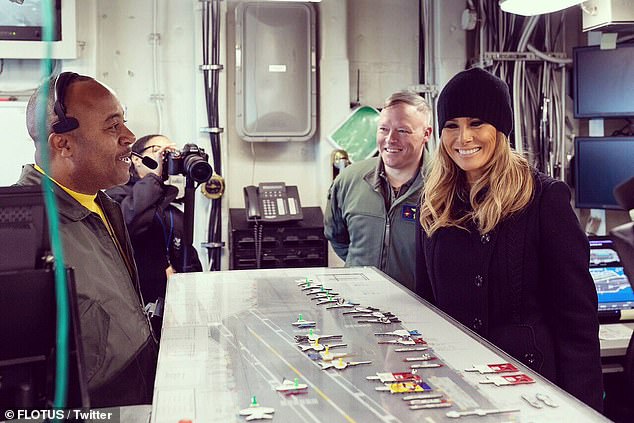 The interview took place aboard the USS George H.W. Bush after Melania spent the day visiting with troops at Joint Base Langley in Hampton, Virginia

The first lady also spoke about the daily difficulties she has encountered in the White House during the Hannity interview, which was previewed by FoxNews.com earlier on Wednesday.

Melania said the hardest part of her role was dealing with ‘opportunists…using my name or my family name to advance themselves’.

She identified those opportunists as ‘comedians, journalists, performers and book writers’.

Hannity followed up by asking her: ‘Does it hurt?’

Melania defiantly replied: ‘It doesn’t hurt. The problem is they’re writing history and it’s not correct.’

She said she wishes the media would focus on ‘the substance and not the gossip’.

Hannity also mentioned how Melania has made an effort to step out of her husband’s shadow in recent months by amping up her Be Best bullying campaign and going on a solo trip to four African countries.

When he asked her to explain her frequent use of the phrase ‘stay true to myself’, she replied: ‘I do what I think is right. I know I will get the criticism – from the public or from the media – but I will do what is right and what I feel is right for the country and for the people.

‘That’s why I say I want to stay true to myself and listen to myself and what to do and what is right, what is wrong and live a meaningful life every day.’

Melania said of her path to where she is now: ‘It’s incredible, especially when you think about your life and where you were born, and all the steps you took.

‘It’s not like you just end up here, you learn a lot on the way here. In my business, and fashion business, it’s a tough business as well.

‘Here, the politics, it’s a tough business. You need to have very thick skin.’ 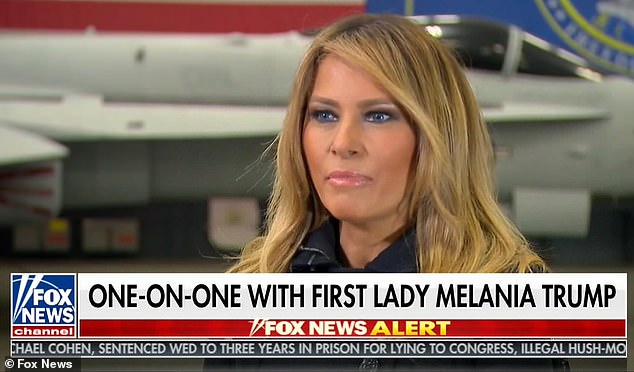 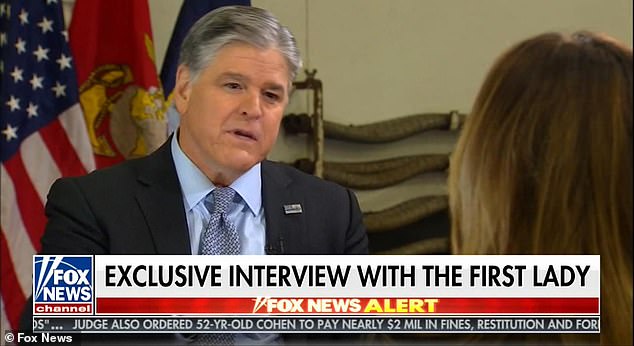 Hannity asked several questions about Melania’s relationship with Donald as she described the pair’s instant chemistry when they met in 1998.

She also spoke about how she knew he would win the 2016 presidential race, saying: ‘I saw how he connects with the people and that’s why I said, I know if you run, you will win.’

Melania said that she does her best to keep up with the news despite her busy schedule.

‘I follow what’s going on, and I give my husband advice and my honest opinion. Sometimes he listens and sometimes he doesn’t,’ she said.

‘I don’t agree with his tone sometimes and I tell him that.’

When questioned about what she wishes the media would portray about her husband, Melania replied: ‘That he is fighting for the American people every day.

‘He wants to guide them the right way and it’s tough because sometimes the media wants to bash and focus on negativity.’ 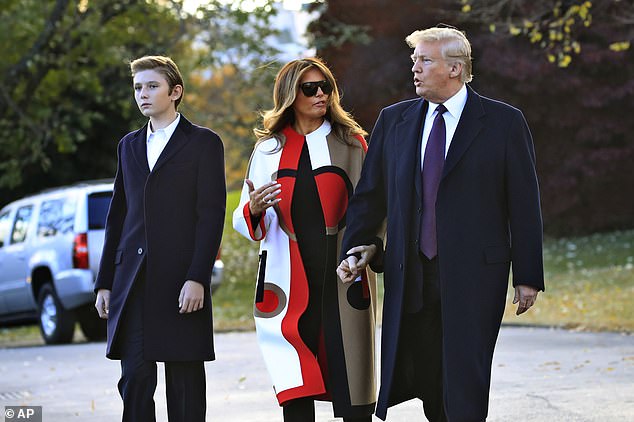 Speaking about her recent visits with the troops, Melania said: ‘It’s very important that we support them. Holidays are coming and not many of them will be with their families, so for me, it’s very important to show them that the president and I and the country, we are behind them.’

She called the USS George H.W. Bush ‘incredible’ and praised the 3,000 military members currently on board the massive carrier that’s as long as the Empire State Building is tall.

Melania noted that as she greeted the troops upon arrival they thanked her for ‘what I do for them.

‘They see what I am doing and that I’m here for them and to support them,’ she said.

The second half of Melania’s interview with Hannity is set to air on Fox News tomorrow night. 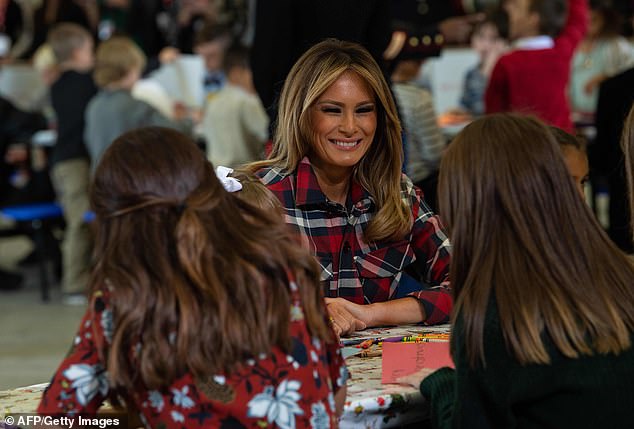 Melania expressed the importance of showing support to the troops in the interview, which came a day after she attended a Toys for Tots event for military families on Tuesday (above) 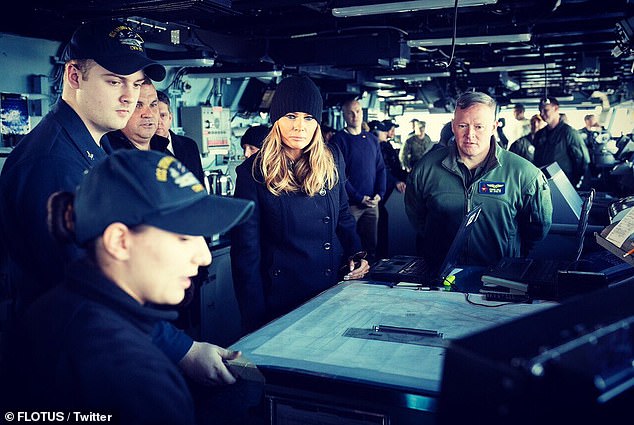 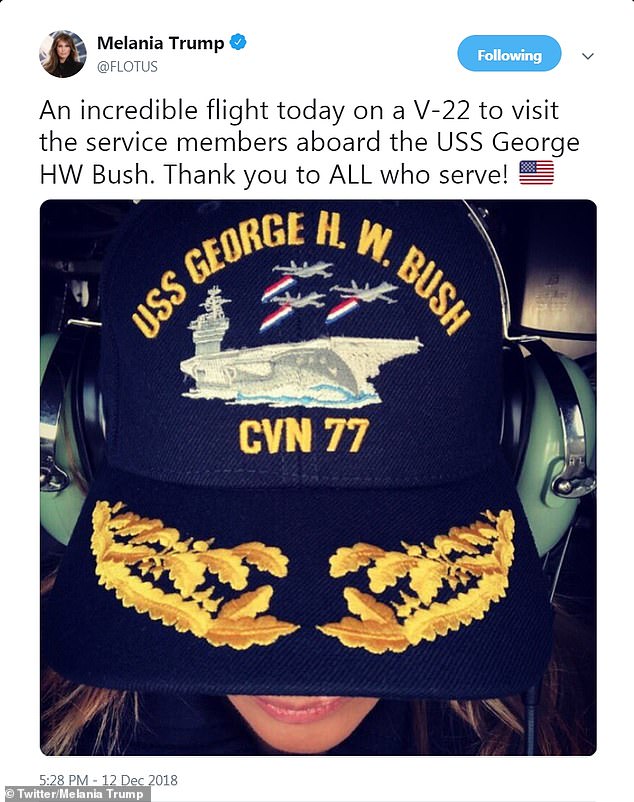 Melania can be seen wearing a hat from the USS George H.W. Bush in a tweet revealing that she had landed on its deck on a Marine Corps V-22 Osprey