A STUDENT mental health campaigner has been bullied out of standing for office after a campaign by Momentum-backing activists, The Sun can reveal.

James Knight put his name forward to be “men’s officer” at the University of the West of England.

But tonight he withdrew from the election – in which he was the only candidate – after Corbyn-supporting campaigners accused him of being sexist.

They also claimed he was exploiting a recent suicide epidemic to push an anti-women agenda.

This week the first elections for the posts were held, and Mr Knight stood to be men’s officer to try and improve “the poor state of mental health services at UWE”. 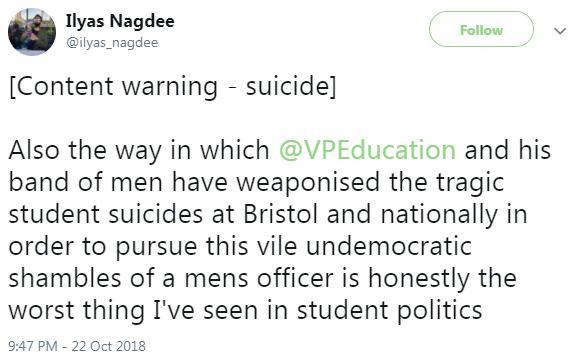 He told a student paper: “I know how deeply mental health issues can run in men and how much of a taboo it can be for men to talk about their mental health.”

But graduates who run the National Union of Students launched a campaign claiming the idea of a men’s representative undermines gender equality.

Amelia Horgan, a member of the NUS executive, said having a men’s officer created a “dangerous narrative in which men’s mental health is weaponised to legitimise reactionary views about gender”.

NUS women’s officer Sarah Lasoye added: “The role of a men’s officer is entirely obsolete and the attempt to implement one stems from a fundamental misunderstanding of liberation and almost always an unearned sense of entitlement.”

And Ilyas Nagdee, another NUS officer, claimed UWE students had “weaponised the tragic student suicides at Bristol and nationally in order to pursue this vile undemocratic shambles of a men’s officer”.

Tonight Mr Knight said the hate campaign had convinced him to withdraw from the election.

He said in a statement: “Due to the negative reaction to the men’s officer position and continued external harassment, I have taken the difficult decision to stand down as a candidate.

“I have campaigned tirelessly for mental health work and reform for years because I know how challenging this can be.”

Several of those involved in the campaign against his candidacy are understood to be members of Momentum, and most have previously lobbied for Jeremy Corbyn to become PM.