A treasure hunter who discovered a record £2m haul of Viking jewellery is being sued by the Church of Scotland for half of the spoils.

Derek McLennan, from Ayrshire, found more than 100 objects, some of them solid gold, on church land in Dumfries and Galloway in September 2014.

At the time, it was reported he would share any proceeds with the Church.

But now, church trustees have launched action at the Court of Session in Edinburgh to recover what they claim is due to them after saying that Mr McLennan had gone back on his promise.

The items, thought to have been buried in the 10th Century, included an early Christian cross made of solid silver, with distinctive enamelled decorations. 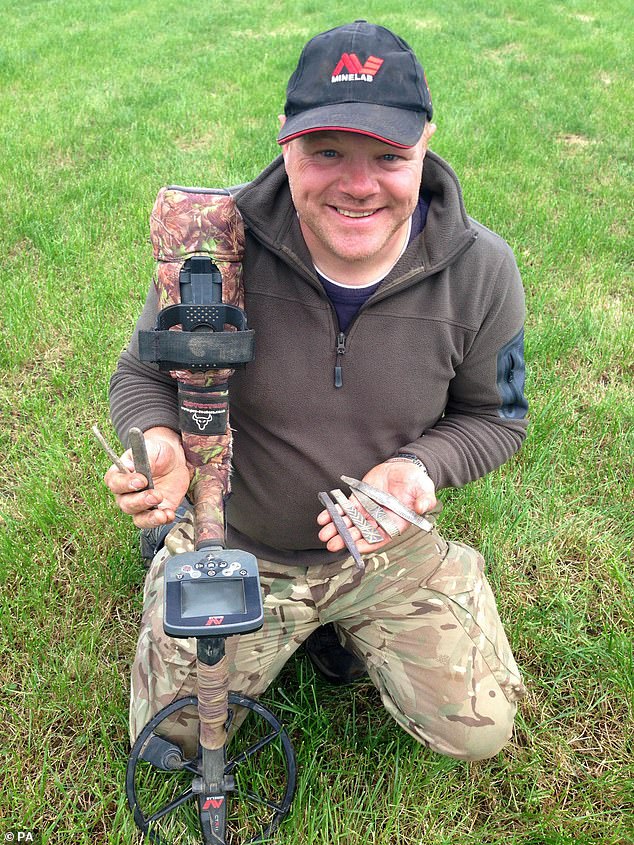 The Queen’s and Lord Treasurer’s Remembrancer, ruled that the items should be displayed at National Museums Scotland, provided it pays £1.98 million to Mr McLennan.

Under Scottish law he is allowed to keep the full value.

National Museums Scotland raised that sum for the treasure – now called the Galloway Hoard – from the Crown Estate.

However Mr McLennan, is now reported to have gone back on the agreement to share the proceeds with the church, prompting the threat of legal action.

His friend and fellow metal detector enthusiast, the Rev David Bartholomew, who was with him when he made his discovery, said the euphoria when the first artefact was pulled from the ground had since turned to acrimony.

The Castle Douglas minister said: ‘Derek was my friend and it is sad that it has come to this. 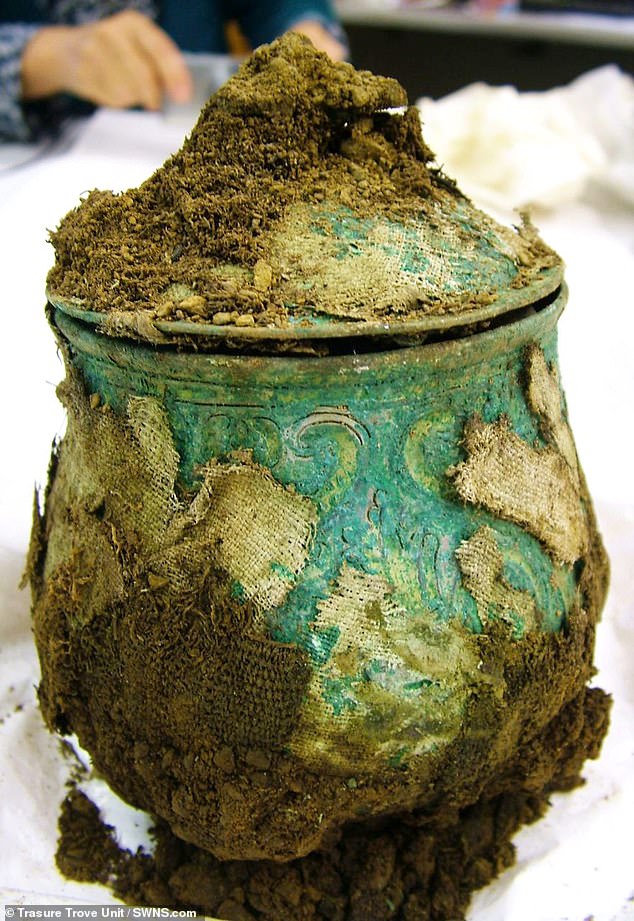 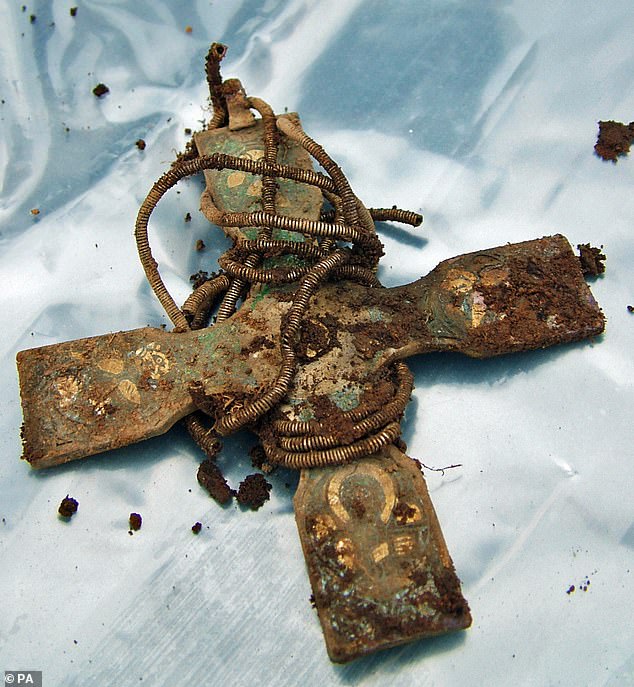 The items, thought to have been buried in the 10th Century, included an early Christian cross made of solid silver, with distinctive enamelled decorations

‘It is my understanding there was always an agreement the money would be shared with the Church.

‘I’m surprised Derek would go back on a deal because he had done everything by the book at all times. I don’t understand why he would, it is not a thing that can be avoided.

‘There is an unwritten rule among metal detectorists that you split any find with the landowner, otherwise they might not give permission to search on their ground.’

Mr McLennan had searched the unidentified area of Church of Scotland land for more than a year in the hunt for treasure.

Mr Bartholomew and another keen detectorist friend, Mike Smith, the pastor of an Elim Pentecostal Church in Galloway, were with him when the discovery was made. 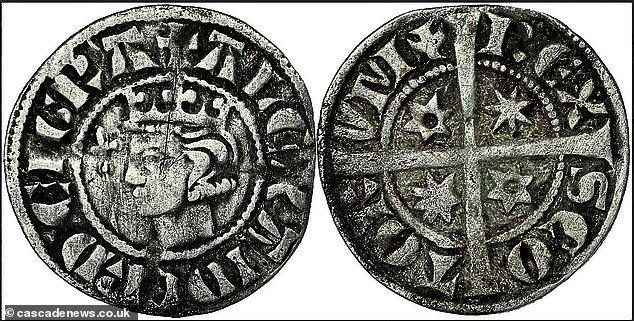 Coins found in the Viking hoard. Mr McLennan had searched the unidentified area of Church of Scotland land for more than a year in the hunt for treasure 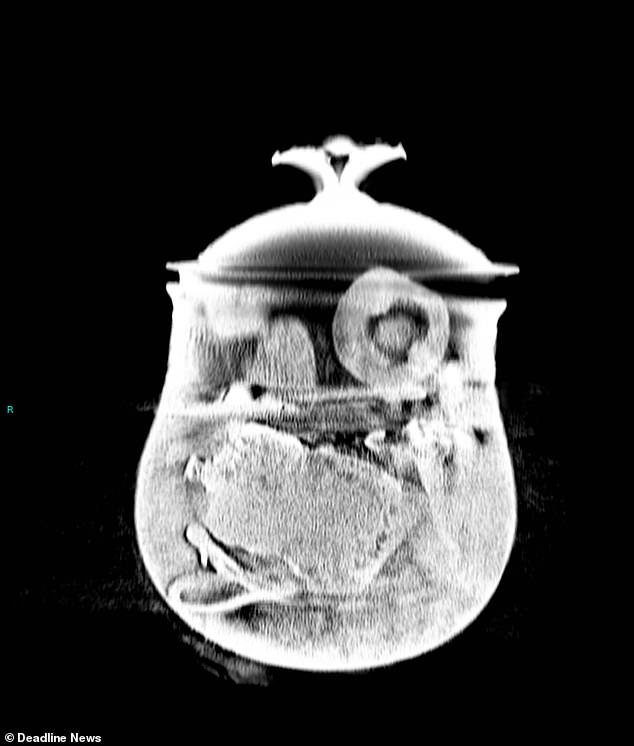 Mr McLennan unearthed the valuables two feet beneath the ground – well below the depth his machine should pick up a signal.

There was great excitement when Mr McLennan then waved aloft an ancient silver arm ring and shouted: ‘Viking!’

The haul was described as ‘outstanding and exceptional’ by experts, and included a rare gold ingot, beads, crystals and a decorated silver-gilt cup thought to be of Byzantine origin.

Mr Bartholomew said: ‘I would never have found the hoard. Derek did because he is a gifted detectorist.

‘I was just pleased to be part of an amazing day.’ 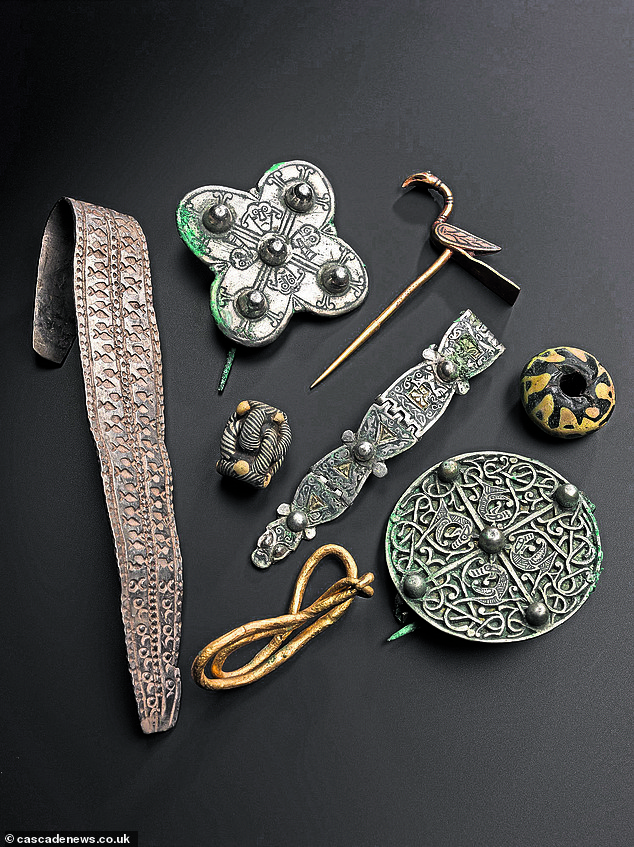 Some of the items found by Mr McLennan. He unearthed the valuables two feet beneath the ground – well below the depth his machine should pick up a signal

Mr McLennan passed on the treasure to the Queen’s and Lord Treasurer’s Remembrancer, which rules on found goods and property without an owner.

Unlike the rest of the UK, where the awards are split between the finder and the landowner, in Scotland rules on discoveries allow the finder to keep the full amount.

In Scotland, it is at the discretion of the metal detectorist if payments are made to the landowner.

When the discovery was made, the church said its General Trustees, as the landowners, had reached agreement with Mr McLennan about sharing any proceeds – and any money would ‘first and foremost be used for the good of the local parish’.

The church said at the time: ‘The Church has worked closely with the finder and agreed an equitable share of its value.’

However, news of the impending legal action suggests that no agreeable split has materialised. 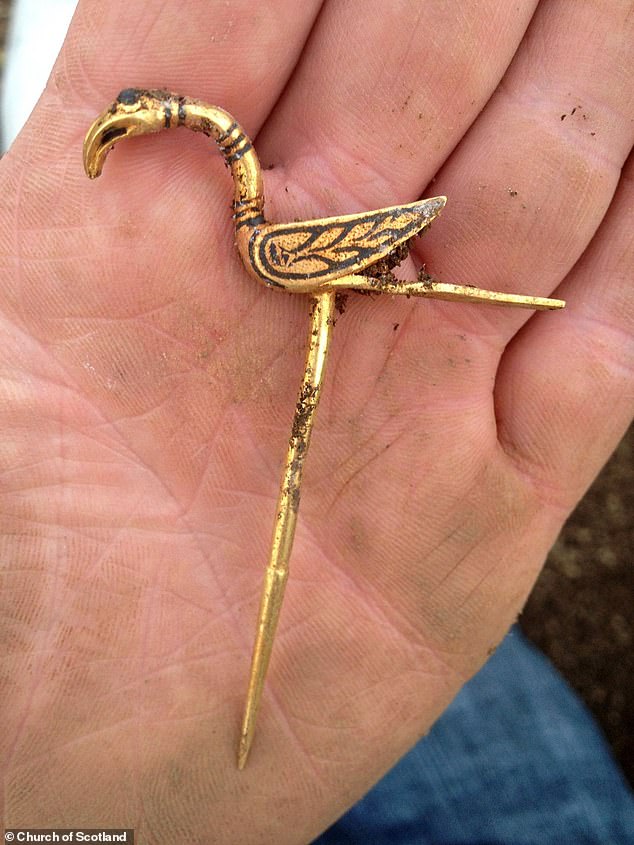 A gold bird pin from the haul. Metal detector enthusiast Derek McLennan uncovered a hoard of Medieval and Viking treasures buried for centuries in a Scottish Churchyard

Mr Bartholomew said that last autumn the church asked him to approach Mr McLennan about the matter as officials had struggled to make contact with him.

‘The Church knew I was Derek’s friend and I was with him at the time of the find so I phoned, emailed and wrote to him but I never heard anything back.

‘I even went to visit him at his house but I could never get him at home, so I was asked to give a statement to the Church about it.’

He added: ‘It is my understanding the Church did not want to go through the courts as it does no one any good.’

Following the find, Mr McLennan and his detectorist wife Sharon launched a firm called Beyond The Beep, to work with the Coming Home Centre for ex-forces personnel in Glasgow and veterans’ mental health charity Combat Stress.

A Church of Scotland spokesperson last night said: ‘It can be confirmed the General Trustees of the Church of Scotland have raised an action against Derek McLennan. As that is now a matter before the court it would be inappropriate for us to provide any further commentary at this time.’

The Galloway Hoard will be displayed at the National Museum of Scotland in Edinburgh from May to November next year before visiting Kirkcudbright, Dundee and Aberdeen.

Mr McLennan did not respond to our requests for a comment.