Theresa May was thrown a lifeline today as Michael Gove and other leading Cabinet Brexiteers decided to stay in her Government.

The Environment Secretary was on the brink of quitting overnight after he turned down the PM’s offer to be Brexit Secretary as she would not let him renegotiate the deal.

But he joined other Eurosceptic Cabinet ministers Andrea Leadsom, Chris Grayling and Penny Mordaunt in deciding to stay on.

In a major boost for Mrs May, he finally broke his silence to announce he is staying in the Cabinet and pledged his support for the beleaguered PM.

And he said ministers should now focus on getting the ‘right deal’ on future trade agreement with the EU.

Addressing journalists outside his office as the Environment Office, he said he ‘absolutely’ does have confidence in the PM. 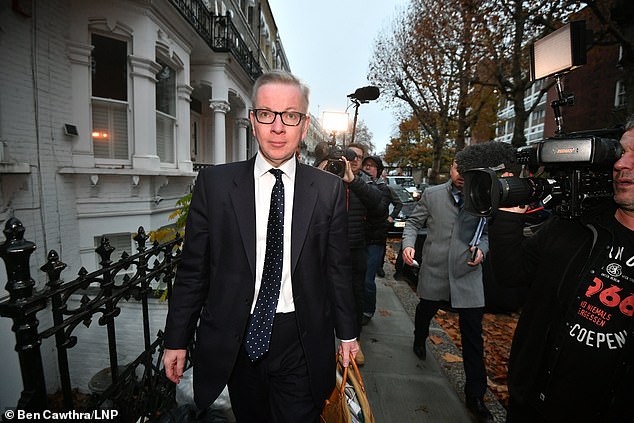 He said: ‘I have had a very good morning with a series of meetings with my colleagues here at Defra, just making sure that we have the right policies on the environment, farming and fisheries for the future.

‘I am also looking forward to continuing to work with all my government colleagues and all my colleagues in Parliament in order to make sure that we get the best future for Britain.

‘I think it is absolutely vital that we focus on getting the right deal in the future and making sure that in the areas that matter so much to the British people we can get a good outcome.’

But he ignored questions on whether he supports the EU Withdrawal deal as it stands.

Mrs May is in the political battle of her life to sell her Brexit plan to the country and survive as PM as Tory MPs launched an open bid to oust her.

Many Brexiteers have warned her time in No10 are numbered after seven ministers and aides – including Dominic Raab and Esther McVey – quit in fury at her Brexit deal.

And in what is set to be another day of high political drama in Westminster, the PM is facing a torturous next few hours as she waits to see if more ministers will quit.

After losing her second Brexit Secretary in just six months, Mrs May offered the post to Mr Gove – but he refused unless he could renegotiate the deal with Brussels.

He considered the job offer a ‘poisoned chalice’ which would force him to deliver a Brexit deal he did not believe in, the Times reported.

But he decided not to quit the Government as he thought it would be nihilistic – and could harm Brexit policy by leaving fewer Eurosceptics around the Cabinet table, The Spectator reported.

The Tory MP for Surrey Heath has kept a low profile since Tuesday’s crunch Cabinet meeting which signed off on the controversial deal.

Theresa May laid down the gauntlet to Tory Eurosceptics over her Brexit deal today – warning that she is a ‘bloody difficult woman’.

The Prime Minister took a defiant stance despite fears that Michael Gove could become the latest minister to quit and join a massive revolt by Brexiteer MPs.

Mrs May is in the political battle o her life as her Brexit deal is hammers by all sides and Tory MPs are mobilising to try to oust her.

But launching a PR blitz to drum up support for her beleaguered deal, the PM today made a rare appearance on live radio to take questions from the public for half an hour.

She admitted to LBC that she had ‘concerns’ about the Irish border ‘backstop’ – but insisted the overall package was the best thing for the UK.

But she insisted that her agreement is the best on the table.

She told listeners: ‘I truly believe this is the best deal,’ she added.

Asked whether she regarded herself as ‘bloody-minded’ like her cricketing her Geoffrey Boycott, the premier said: ‘Well, Ken Clarke once described me as a bloody difficult woman.’

And he remained tight-lipped about his future as he was mobbed by reporters leaving his central London home this morning.

International Development Secretary Penny Mordaunt has been placed on resignation watch by twitchy No10 officials.

Mrs May is facing the political battle of her life today to hang on to her leadership and sell her Brexit deal as she comes under heavy fire from all sides.

She had a torrid day yesterday as her Government was rocked by a string of  resignations.

While leading Brexiteer Jacob Rees-Mogg launched a public bid to oust her as leader, urging her to step down as she had failed at Brexit in a hastily arranged press conference outside Parliament.

While many more Tory MPs broke ranks with their leader to publicly declare they had sent their letters of no confidence in.

There are mounting fears in Downing Street that 48 could be in by today – the the magic number which would trigger a confidence vote in the PM and potentially pave the way for a protracted and bitter Tory leadership contest.

But as Mrs May comes under a barrage of attacks from all sides, she launched a PR blitz this morning to sell her Brexit deal to the country.

She made a rare live radio appearance on LBC this morning where she took questions on her from listeners deal for 30 minutes.

Striking a defiant tone, she laid down the gauntlet to Tory Eurosceptics over her Brexit deal today – warning that she is a ‘bloody difficult woman’.

Mrs May said she had a ‘good conversation’ with Mr Gove this morning – but refused to be drawn on whether he had turned down a move to become the new Brexit Secretary. 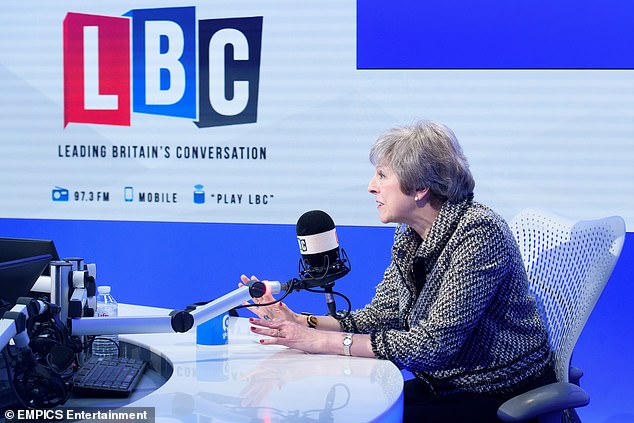 In a phone in on LBC Radio, Mrs May admitted she had ‘concerns’ about the Irish border ‘backstop’ – but insisted the overall package was the best thing for the UK.

‘What the EU wanted was to separate Northern Ireland from the rest of the UK,’ she said. ‘We have now got it being done in a different way.’

She said she is aware of the risks of trade with the EU breaking down because she personally relies on insulin produced in Denmark.

‘I truly believe this is the best deal,’ she added.

Mrs May also denied claims that the DUP is on the verge of withdrawing support for the government, saying: ‘We are still working with the DUP.’

Asked whether she regarded herself as ‘bloody-minded’ like her cricketing her Geoffrey Boycott, the premier said: ‘Well, Ken Clarke once described me as a bloody difficult woman.’

Vicky Pattison REMOVES her engagement ring
The Greatest Dancer fans joke Cheryl is looking for her 'next husband' as she gyrates over routine
Gigi Hadid looks stony-faced as she's forced to escort YouTube prankster off Chanel catwalk
Flower power! Duchess of Cambridge is radiant in Erdem frock at the Chelsea Flower Show
NHS England announces a ‘major overhaul’ of cancer screening programmes
World's top bridge player banned after positive test for synthetic testosterone
Mental health of three generations has been harmed by the Holocaust, research suggests
Father of glamorous Russian convicted of conspiring against the US pleads for her return