Migrants attempting to cross the Channel have threatened to drown themselves if they are stopped by the Royal Navy.

Families preparing to make the crossing to Britain from Calais claim the stretch of water will become ‘a sea of bodies’ if the British government intervenes and sends them back to France.

Father Kamal Sadeghi, who is getting set to make the perilous journey with his wife and nine-month-old daughter, told The Times: ‘I am too tired to carry on. If they try to stop us I will drown myself.’

This comes as French officials have blamed the UK’s ‘hypocrisy’ and ‘black economy’ for increasing the number of migrants crossing the Channel in small boats.

Britain’s immediate entitlement to benefits, healthcare, housing and the possibility of working soon after arriving are what makes Britain worth the hazardous journey, they claim. 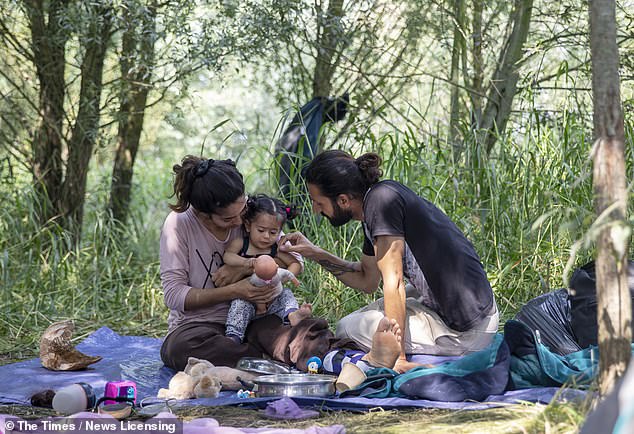 Father Kamal Sadeghi, who is getting set to make the perilous journey with his wife and nine-month-old daughter (pictured together), told The Times : ‘I am too tired to carry on. If they try to stop us I will drown myself’ 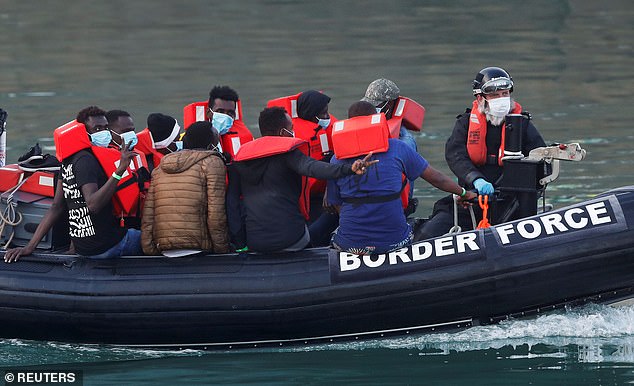 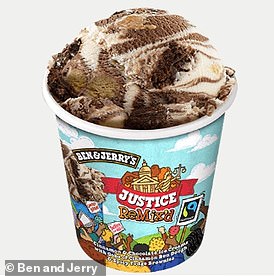 The American company’s British branch criticised the Home Secretary‘s call for the Navy to stop migrants crossing the Channel, but a Home Office source immediately hit back, saying Miss Priti’s department did not care about angering ‘a brand of over-priced junk food’.

The spat began when Ben & Jerry’s UK Twitter account posted: ‘We think the real crisis is our lack of humanity for people fleeing war, climate change and torture.’

It went on to say ministers should make it easier for refugees to reach the country: ‘People wouldn’t make dangerous journeys if they had any other choice. The UK hasn’t resettled any refugees since March, but wars and violence continue. What we need is more safe and legal routes.’

Ben & Jerry’s then claimed ‘people cannot be illegal’ and pointed to the 1951 Refugee Convention which states that entering a country illegally should not affect claims for asylum.

The string of tweets ended with: ‘Let’s remember we’re all human and have the same rights to life regardless of the country we happen to have been born in. And once more for the back: people cannot be illegal.’ 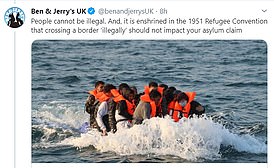 In a Twitter thread, Ben & Jerry’s UK said that ”stronger’ borders aren’t the answer’ and that ‘people cannot be illegal’

A Home Office source told the BBC: ‘Priti is working day and night to bring an end to these small boat crossings, which are facilitated by international criminal gangs and are of serious concern.

‘If that means upsetting the social media team for a brand of overpriced junk food then so be it.’

The row came as Miss Patel vowed to take much tougher action on migrants crossing the Channel.

She has asked officials to look into whether the Royal Navy could be used to turn back ships and has begun conversations with France on cutting the number of crossings, which Miss Patel has described as ‘unacceptable’.

However, critics say her proposals could be illegal.

There is also an expectation in maritime law that a captain of a ship will help any other vessel that is in danger, which covers many of the small boats carrying migrants in the Channel.

Mr Sadeghi, 39, his wife, Niki Karimi, 33, and their daughter, Sava, who turns one on Sunday, have spent ten days living in a tent in woodland in Calais having fled Iran after his wife’s family objected to their marriage.

He told The Times: ‘We need just a normal life. We need to get on a boat. If they try to stop us I will kill myself. I would jump in the water’.

Yusshka Mir, 36, a designer from Iran, told the paper: ‘What Boris Johnson does not understand is that for us it is better to die if we cannot reach England. I would drown myself. We will all die.’

Just one in five migrants who have tried to cross the Channel have been intercepted by France – as politicians from the country now claims the newcomers are lured into Britain by its generous welfare state.

Immigration minister Chris Philp travelled to Paris on Tuesday to seek stronger enforcement measures – as Border Force continued to deal with crossings along the south coast of the UK.

Mr Philp said that French authorities had caught ‘well over a thousand’ migrants making the crossing this year, but figures from January 2020 to August 6 show the total number to have made the trip to Britain in small boats is around 4,100.

More than 600 people have made the journey just in the previous few days, suggesting that the proportion of those intercepted is roughly one fifth.

Defence select committee chairman Tobias Ellwood told the Telegraph the French were ‘unable to cope at the best of times’ – and accused the country’s authorities of ‘half-heartedness’.

‘In normal circumstances, the French are only preventing around half of the dinghies crossing the Channel – but during the current spike that’s dropped to a fifth,’ he said.

‘It’s clear that only with greater maritime collaboration with the British can we attempt to significantly reduce the success rate of the crossing.’

He also voiced support for involving the Armed Forces ‘during this heightened period’.

Deputy mayor of Calais Philippe Mignonet told French newspaper Voix Du Nord migrants risked the crossing ‘because they can work in the black economy when they want, because there is no control, not on the street or in the workplace’.

‘I fear a tragedy one day at sea, but the British blame us for their own hypocrisy,’ he said.

National Society for Rescue at Sea in Calais president Bernard Barron added that migrants have now ‘mastered the sea and, with GPS support, wait until they are in British waters to send out an SOS call’.

He said Britain’s government will criticise migrants for making the journey, ‘but they do not criticise themselves, questioning the reasons that make their country so attractive’.

It comes as lawyers representing asylum seekers who arrived in the UK by crossing the Channel on small boats launched legal action to halt their deportation, which is due to take place on Wednesday.

Speaking to reporters after the Paris meeting, Mr Philp said the ‘sheer numbers’ crossing the Channel were ‘completely unacceptable’ to both the French and UK governments, so it is quite clear that more needs to be done.

‘And that is exactly what this new, comprehensive action plan that we are working on will aim to do,’ he added.

Mr Philp would not comment on details of the plan but claimed there were a ‘number of measures, some of them new, which are under discussion’.

He said it would be ‘premature’ to talk about financial commitments at this stage because the plans were still being finalised.

But he insisted both countries had ‘renewed and reaffirmed their absolute commitment to make sure this border is properly policed and this route is completely ended.’

Newly-appointed clandestine channel threat commander Dan O’Mahoney, who travelled to Paris with Mr Philp, will return to the continent early next week to continue discussions, with France due to appoint its own commander.

The Government has also faced fresh criticism over warnings nine months ago that its own policies meant migrants were resorting to more dangerous routes. 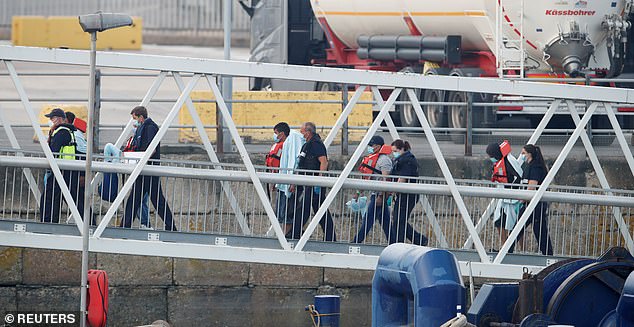 Migrants disembark after arriving at Dover harbour this morning 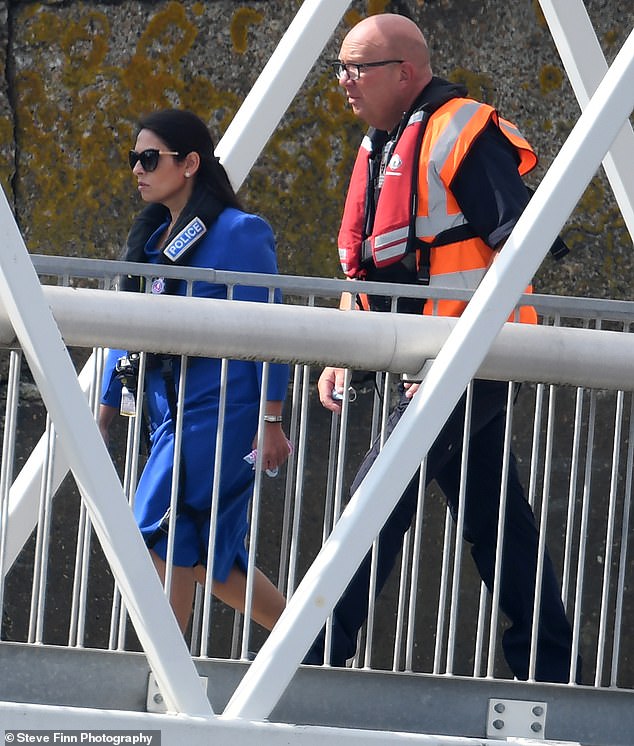 Home Secretary Priti Patel headed to Dover on Monday, and was seen disembarking from a police boat that had been out in the Channel earlier that morning

A report by the Foreign Affairs Committee published in November said: ‘A policy that focuses exclusively on closing borders will drive migrants to take more dangerous routes, and push them into the hands of criminal groups.’

Home Secretary Priti Patel was a member of the committee at the time of its inquiry.

Meanwhile, Prime Minister Boris Johnson was accused of using inflammatory language after calling migrant boat crossings a ‘very bad and stupid and dangerous and criminal thing to do’.

He also hinted at changing laws to tackle the problem, while Downing Street said Brexit would help as it would end the ‘inflexible and rigid’ requirements on how asylum applications are examined and considered.

The Home Office has formally requested help from the Ministry of Defence (MoD), with a military plane sent out on Monday to survey the Channel and alert the Coastguard and Border Force to emerging crossing attempts.

But Calais MP Pierre-Henri Dumont said bringing in the Navy was a ‘political measure’ intended to show ministers were taking action and warned that it ‘won’t change anything’. 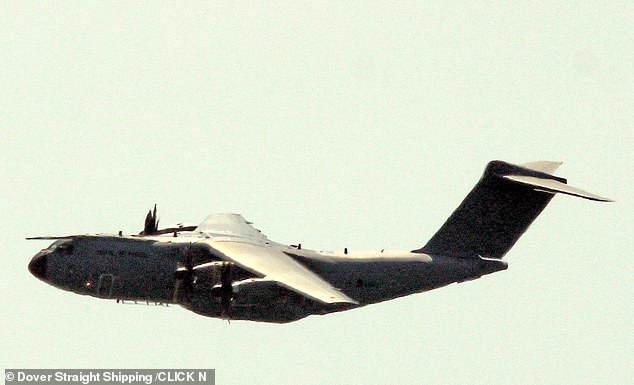 The Home Office has formally requested help from the Ministry of Defence (MoD), with a military plane sent out on Monday (pictured) to survey the Channel and alert the Coastguard and Border Force to emerging crossing attempts

The latest outcry follows a similar storm last summer when another spike in crossings led Mr Johnson to warn Britain was prepared to start sending back those migrants who did make it across – comments which were branded ‘misleading and inflammatory’ by campaigners.

Since then there have been a series of meetings between UK and French ministers and officials, each time with the promise of more agreements or resources in efforts to address the problem.

Bella Sankey, director of Detention Action, said: ‘Any ”comprehensive plan” must create a safe and legal route for those who would otherwise risk a Channel crossing, otherwise it is neither comprehensive nor an effective plan.

‘These negotiations with French counterparts are doomed to further failure unless the UK Government can stop chasing unicorns and show some principled and noble leadership’.