A MILITARY plane in Pakistan crashed into homes moments after taking off early this morning – leaving at least 17 people dead.

Shocking footage shows a huge fireball erupting after the training flight came down over the village of Mora Kalu just before dawn on Tuesday.

Locals walk past the smouldering wreckage after the plane disaster in Rawalpindi, Pakistan[/caption]

Two pilots and five soldiers are among the dead – and rescuers fear the toll could rise as many injured are in a critical condition.

Grieving local Mohammad Mustafa said: “My sister, her husband and their three children were killed when the plane crashed into their home.”

Horror TV reports showed a blaze erupting in the residential area near the garrison city of Rawalpindi. 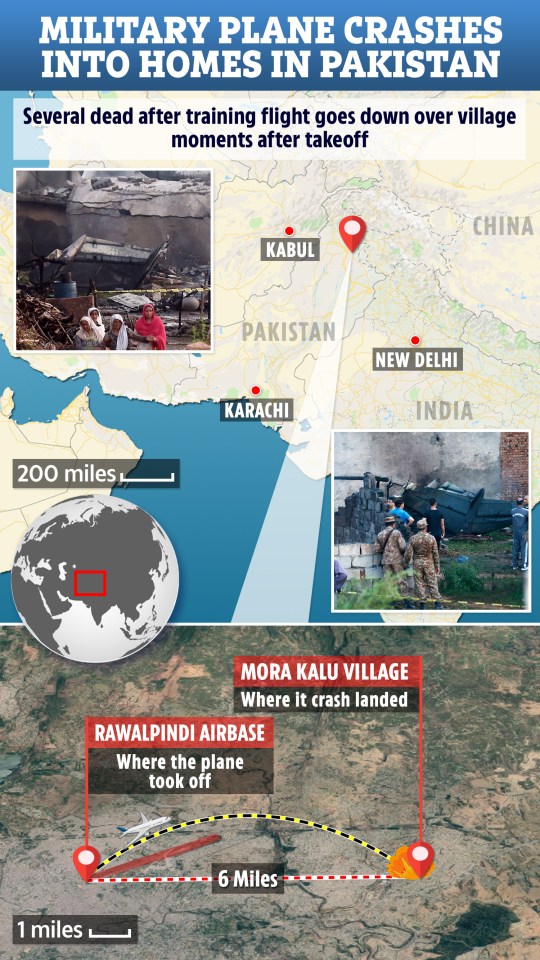 Army personnel look through the rubble for any survivors after the disaster in Rawalpindi, Pakistan[/caption]

The army aircraft had taken off for a routine training flight moments earlier from an air base in Rawalpindi, officials said.

An emergency was declared in local hospitals where at least 15 wounded people were reportedly being treated.

But local reports say that the 12 dead are civilians killed alongside the five military personnel who were on board.

Mr Butt added: “We have shifted all the bodies and injured persons to hospitals.

“Most of the victims received burn injuries and children are among the dead.”

A rescue operation was ongoing this morning to try to find survivors in the rubble.

Girl, 7, left with horrific scars after ‘gran whipped her for misbehaving’

Boy, 6, dead after 'pals put nozzle up bum & blast compressed air into him’

Officials said the plane suddenly lost contact with the air traffic control tower after taking off.

A reason for the crash is not yet known and an investigation has been launched.

Rawalpindi is close to the capital, Islamabad, and is where the headquarters of the Pakistan army is based.

Locals and soldiers look on in shock at the rubble left behind after a plane came down in Rawalpindi, Pakistan[/caption]