A lost cat has finally been reunited with her owner – 10 years after disappearing following a routine trip to the vet.

Feline Tilly, then aged four, was having injections but managed to escape from her basket and vanished.

Her owner, who does not wish to be named, said she had given up any forlorn hopes that the missing moggie would be seen again. 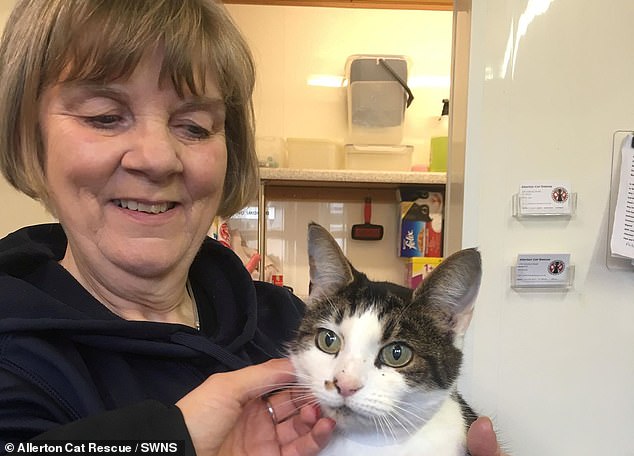 Allerton Cat Rescue volunteer Jean Kevan (above) is pictured with cat Tilly.  The feline escaped from her cat box on a visit to Avenue Vets in Saltaire ten years ago, before being reunited with her owner

But she was left gobsmacked after getting a knock at the door from volunteers at Allerton Cat Rescue.

Amazingly the beloved cat had been found in good physical condition and just five minutes walking distance from her owner’s address in Shipley near Bradford, West Yorkshire. 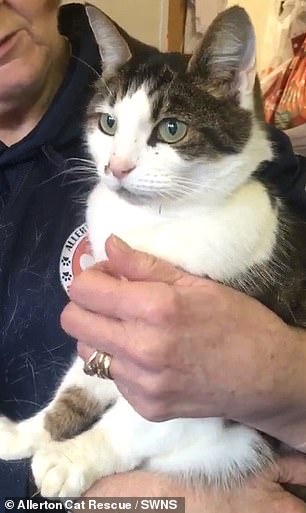 Cats like Tilly, above, are checked for chips on admission to Allerton Cat Rescue. As one was found the centre contacted Petlog for the owner’s details, which ehlped to reunite the mog with her owner

The long lost pair were brought back together again on Tuesday last week in an emotional reunion.

Allerton Cat Rescue founder Brenda Satterley decided to investigate after being handed the microchipped pet by a member of the public.

She said: “We tried ringing the former owner but got no response, so my friend and volunteer, Jean Kevan, decided to try out the address on Saturday afternoon.

“We weren’t expecting much, as we assumed the woman had moved. She answered the door to my friend though and confirmed that she had lost a cat 10 years ago.

“She came in on Tuesday for it after we’d taken care of it over the weekend..”

Ms Satterley said the woman had originally got the cat from Allerton Cat Rescue.

Ms Satterley admitted she was astonished by both the condition of the cat and her whereabouts.

She said: “We don’t know where she had been before, but the person who had been looking after her recently and brought her in found the cat just five minutes’ walking distance from its owner’s address.

“She’s in really good physical condition given that she went missing all those years ago.

“She is very scared and nervous at the moment, which I hope isn’t a problem, because the owner now has young children.”

Tilly was actually originally adopted from Allerton Cat Rescue but escaped from her cat box on a visit to Avenue Vets in Saltaire. Despite looking for her she was never found.

It’s not known what happened to Tilly during the next seven years, but she must have stayed local as a family not far from the vets started looking after her in their greenhouse three years ago. 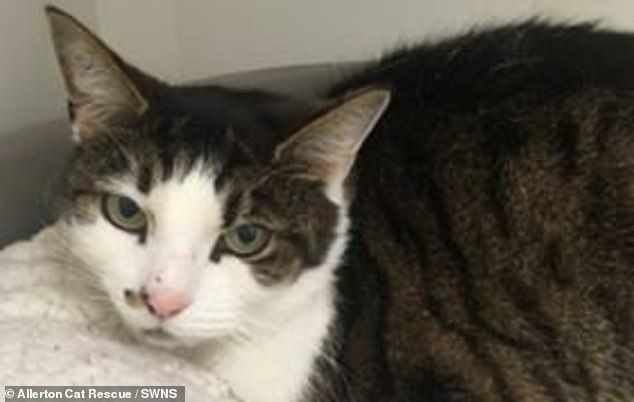 The beloved cat Tilly, above, had been found in good physical condition and just five minutes walking distance from her owner’s address in Shipley near Bradford, West Yorkshire. The long lost pair were brought back together again on Tuesday last week

Eventually, they decided to allow her into their home but one of the children was allergic so Tilly was brought to the cat rescue.

Cats are always checked for chips on admission and as one was found the centre contacted Petlog for the owner’s details.

Volunteer Jean Kevan decided to visit the original address just in case her owners still lived at it – which amazingly they did.

Ms Satterley is thrilled the story had a happy ending and she added: “We don’t actually microchip cats here, but we tell the new owners to give it a week for the cat to settle before they get it done.

“It only costs about £15 to get cats microchipped and this case shows its worth. If this cat hadn’t been chipped, we never would have got it back to her owner.”

Notting Hill carnivals sparks into life as revellers cover each other in colourful powder paint
Chaos for Ryanair passengers as airline loses bid to block strike
Billionaire Chinh Chu faces expensive lawsuit after model Simona Andrejićc crashes using zipline
CHRISTOPHER STEVENS: The Beeb's got a new police hit - and it's as arresting as Killing Eve
Facebook vows to ban graphic images of self harm
Holly Willoughby and Phillip Schofield reunite on the ice
'Several people are killed' as tourist bus overturns on Madeira
Soviet spy radio that was buried in a former forest in Germany is discovered in mint condition