A university student wrongly accused of plotting a terrorist attack in Australia has accused police of ruining his life by ‘irresponsibly’ charging him.

Mohamed Kamer Nizamdeen was arrested in August charged with terrorism crimes after he was linked to a notebook detailing alleged attack plans.

The attacks included blowing up the Sydney Opera House and assassinations of then-Prime Minister Malcolm Turnbull and his deputy Julie Bishop. 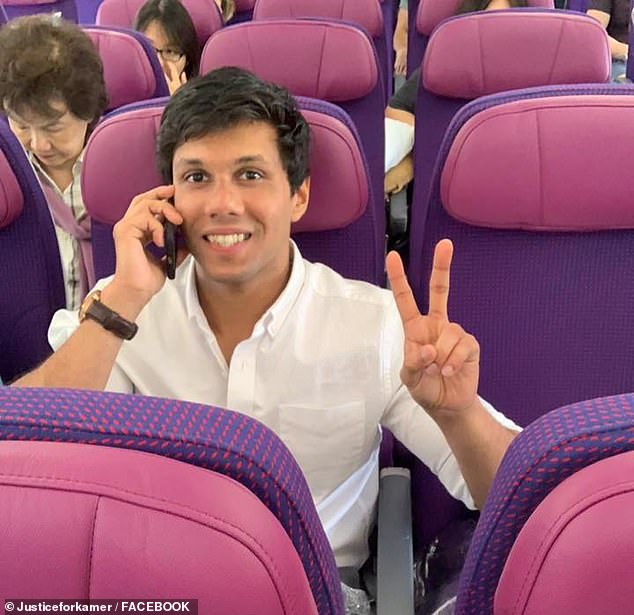 Mohamed Kamer Nizamdeen, 25, slammed Australian police for wrongly charging him with terrorism, after he returned to his native Sri Lanka (pictured on the plane home)

The 25-year-old spent four weeks behind bars, including a night in Golburn’s Supermax prison, before the charges were dismissed when handwriting analysis couldn’t prove he wrote the terror plans.

Mr Nizamdeen this week returned to his native Sri Lanka to rebuild his ‘ruined’ life, receiving a hero’s welcome at the airport.

‘I strongly believe this happened because I am an Asian on a student visa,’ he told a press conference soon after he arrival in the capital Colombo.

‘The AFP had the wrong impression that I did not have the resources and the capability of defending my innocence.’ 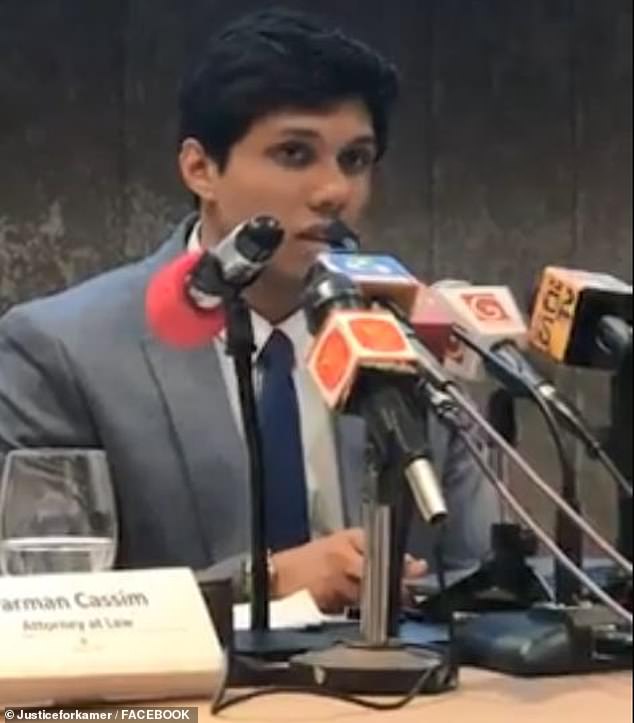 He called the AFP investigation ‘immature, unprofessional, irresponsible, embarrassing, and biased’ at a press conference in Colombo 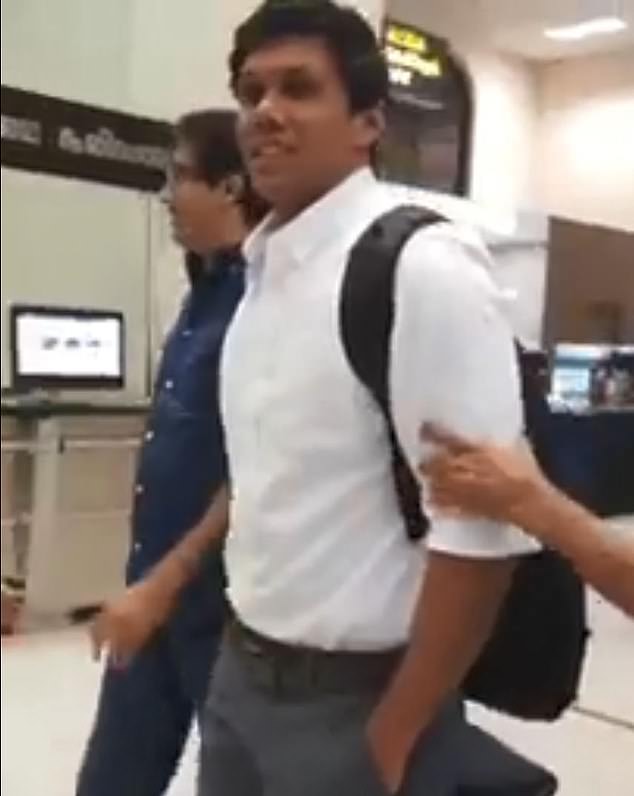 Mr Nizamdeen this week returned to his native Sri Lanka to rebuild his ‘ruined’ life, receiving a hero’s welcome at the airport

Mr Nizamdeen praised the Australian courts system for causing the case to dropped on October 19 due to lack of evidence.

‘After I was charged and incarcerated, my only consolation was having faith in the Australian judicial system – a completely independent body to the AFP – in doing the right thing and recognising my innocence,’ he said.

‘The only evidence was the notebook which was supposedly found by a colleague and was not in my possession at the time of discovery.

‘[It was] discovered in an office space on a different floor where I had not been working in for nearly a month.’

Searches of Mr Nizamdeen’s mobile phone, computer, and other written materials showed no trace of terror plots or extremist ideology.

Mr Nizamdeen said police should have used their powers to hold terror suspects for 14 days without charge, giving them plenty of time to discover his innocence. 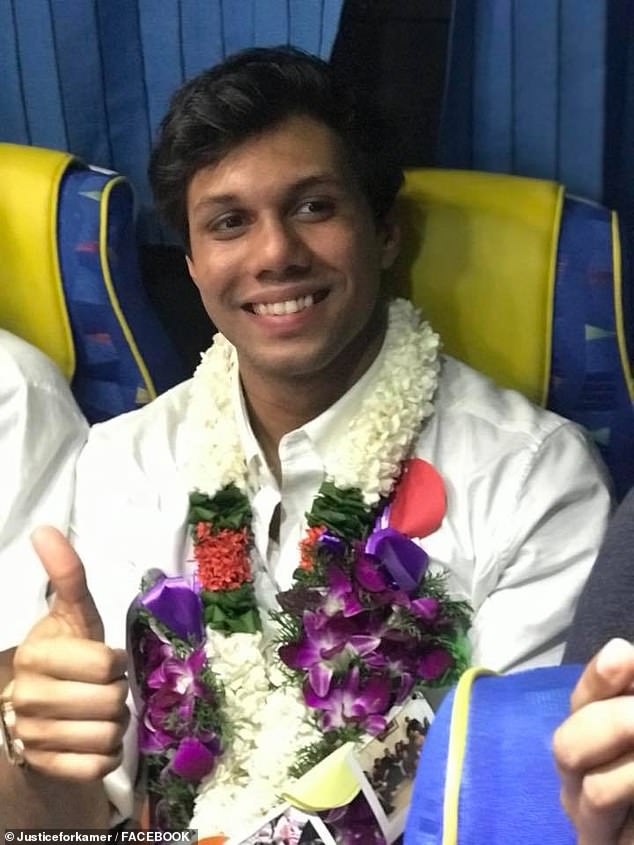 He said he was instead charged on ‘flimsy evidence’ after an eight-hour interrogation, despite protesting the handwriting wasn’t his.

‘What was even more hideous was what followed afterwards. Nowhere in the world would you have the media circus which followed my wrongful arrest and the press conference held by [the AFP],’ he said.

The IT worker’s face was then splashed across news reports depicting him in stereotypical Middle-Eastern dress and calling him a ‘posterboy for terrorism’.

‘This whole saga has ruined my future and I have returned to Sri Lanka to carry on with my life,’ he said.

‘The ordeal has left me shattered and all I can think of right now is to raise my voice and stand in support of other victims of injustice who stand wrongfully accused by any system.’ 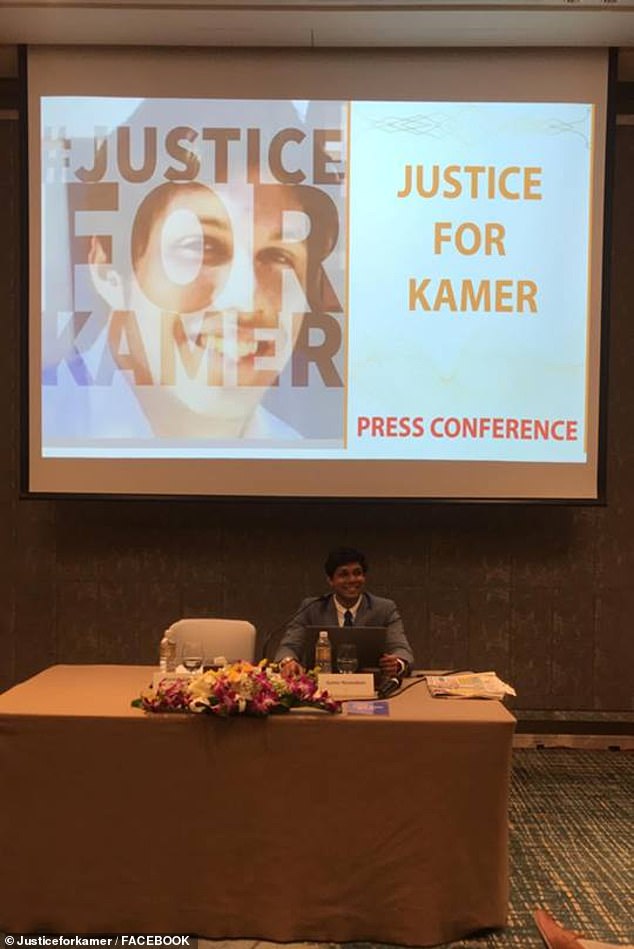 Mr Nizamdeen said police should have used their powers to hold terror suspects for 14 days without charge, giving them plenty of time to discover his innocence

Mr Nizamdeen noted that his UNSW supervisor Arsalan Khawaja, brother of Australian cricketer Usman Khawaja, was questioned without being charged.

‘Therefore, on the same piece of evidence, there are two differing investigation processes,’ he said.

Mr Nizamdeen also described how he was locked up for four weeks, including six days in solitary confinement in a high-security supermax prison.

‘[This] is reserved for terrorists and murderers. I had no contact with the outside world for six days, which is a violation of basic human and fundamental rights,’ he said.

‘This means no free access to lawyers and family… It was nearly a month until my family was able to make contact with me.’

Because police chose to focus on him, Mr Nizamdeen said the real terror suspect could still out there plotting attacks of a ‘grave and frightening nature’.

‘The incriminating content had very descriptive details of terrorist activities, which establishes that the manufacturer of this document has definite knowledge of terror activities,’ he warned.

‘[They are] still at large, being a danger and threat to the lives of Australians, especially to my colleagues and students at UNSW.’ 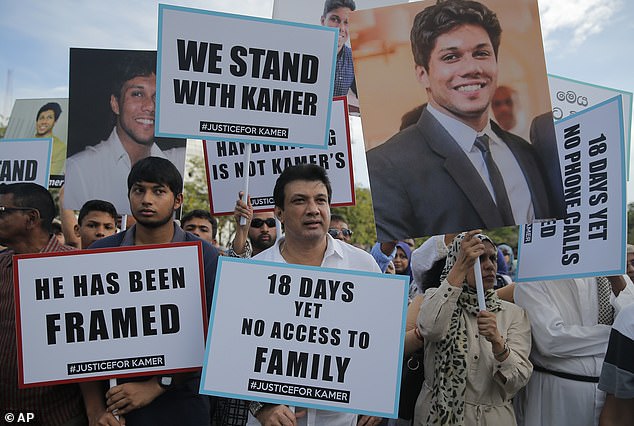 Mr Nizamdeen also described how he was locked up for four weeks, including six days in solitary confinement in a high-security supermax prison

Police refused to apologise to Mr Nizamdeen after he was released, saying the ‘very nature’ of terror threats meant they needed to ‘act first’.

‘We can never be complacent because the terrorist threat in Australia and NSW is very, very real,’ NSW Police counter-terrorism Assistant Commissioner Michael Willing said at the time.

‘I think those that are involved in the production and manufacture of these documents are the ones that have had an impact on Mr Nizamdeen.’

Mr Nizamdeen said he was recently given Australian permanent residency after applying for it before his arrest, but would instead stay in Sri Lanka.

‘I am completely exonerated, and I hope the media and the Sri Lankan public can help me pick up the pieces of my shattered life,’ he said.

His lawyer earlier said he was considering suing police for wrongful confinement.