Shocking footage shows the moment a 15-year-old boy and 35-year-old man are shot on a busy Birmingham street as the suspected shooter flees across a busy road before speeding off in a getaway car.

Police are investigating the shooting which took place on Warwick Road, Solihull at 3.42pm yesterday.

Police say they believe the victims were deliberately targeted by the attacker.

Both victims were taken to hospital for treatment to leg injuries, described as not life threatening or life changing.

An area of pavement on Warwick road remains cordoned off near Dovehouse Lane, along with a van and nearby property as police carry out an investigation into the shooting. 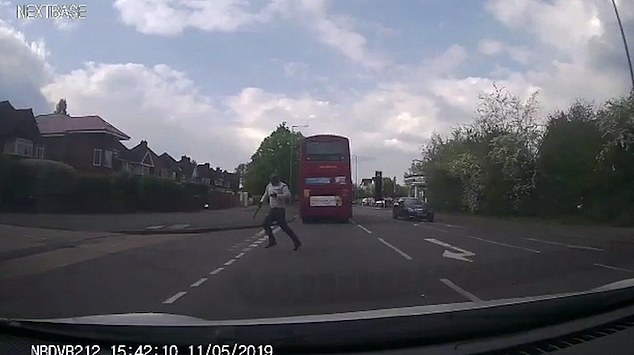 A spokesman for West midlands police said: ‘Police are investigating after a man, aged 35, and a 15-year-old boy were shot at on Warwick Road in Olton, Solihull, around 4.30pm yesterday (11 May).

‘The attack is thought to be deliberately targeted and both victims were taken to hospital for treatment to leg injuries, which are described as not life threatening or life changing.

‘The offender made off in a vehicle and police are calling for witnesses to contact them via Live Chat at west-midlands.police.uk between 8am and midnight, call 101 or Crimestoppers anonymously on 0800 555 111 quoting log number 1702 of 11/5.’

Dash-cam footage shows the men jumping out of a white van before one begins shooting at two others before fleeing into the middle of a busy A road.

In the first few seconds of the video two men appear to dart behind a white van for cover as the shooter points a gun towards them as he runs in front of traffic. 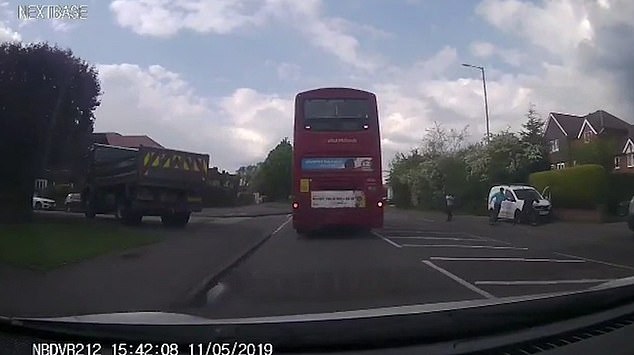 Men ‘jump’ out of a white van on the side of Warwick Road, Solihull, Birmingham before the shooter takes aim 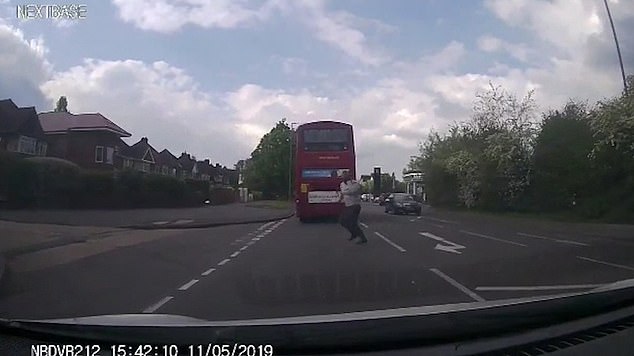 The offender can then be seen speeding off on the wrong side of the road in a dangerous overtake as he passes a bus.

The driver who caught the scene in front of him on his dash-cam said:’It is 100% a gun, if you look on the right hand side after a few seconds you can see him aim the gun, it had a silencer on it. Definitely a gun.

‘I was in the car with my partner on the way back from shopping when we got caught in the middle.

‘There was a silencer on the gun so we didn’t hear it but we saw shots being fired.

‘We were afraid we were going to get shot if we drove past the shooter and into his line of fire as he seemed to miss a few shots.

‘We decided to drive on past him anyway and just get out of there.

‘The shooter then drove off down the wrong side of the road.

‘Air ambulances and armed police arrived at the scene shortly after.’

‘We zoomed in to identify the shooters number plate for the police [from the video].

‘We live around here and didn’t expect to see this at all in Solihull as it’s quite a nice area.’