These daredevil skiers have been seen flying down a treacherous track tied to horses by rope to claim first prize in a bizarre contest.

Mark LaRowe captured the 2019 national championships of the sport known as skijor in Montana, US, late last month.

The unusual activity involves skiers being pulled along a snowy obstacle course by the horses, scaling jumps and obstacles to battle it out for first place in order to win cash prices. 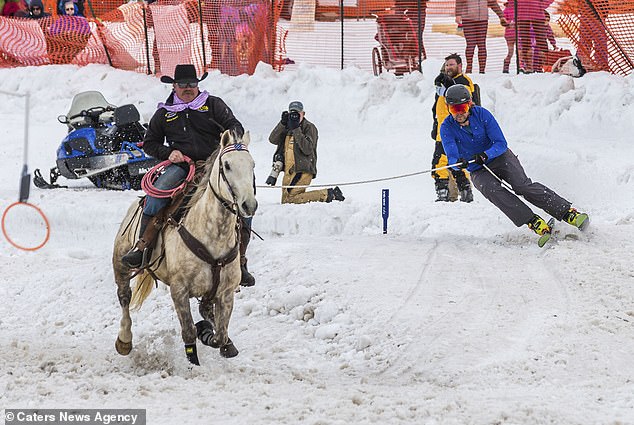 Mr LaRowe, 53, co-founded a skijor group in the US after photographing the sport for five seasons.

He said: ‘Equine skijoring is a winter sport primarily based in the Western US states along the spine of the Rocky Mountains.

‘The timed events involve a rider, horse and skier and prizes are awarded based on the fastest overall time.

‘The rider and horse pull a skier through an obstacle course consisting of jumps, ramps, catch rings, and slalom gates on a fixed-length course.’ 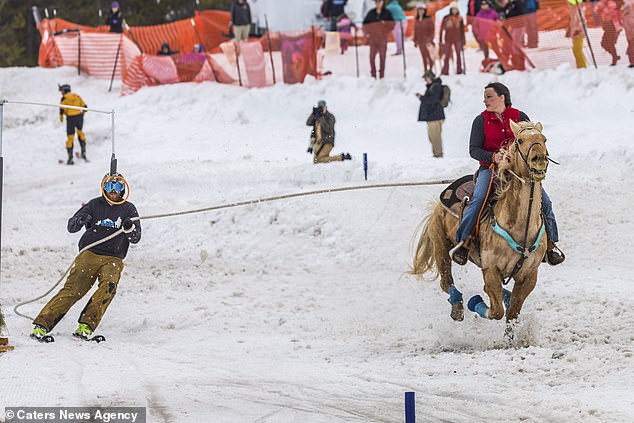 Skijoring is a Western US tradition that brings together cowboy and ski culture into an entertaining spectacle that requires coordination between a horse, rider and skier.

It is thought the origins of the sport lie in Scandinavia where it was a mode of transport that involved a rider directing a horse via long reins from a set of skis behind the steed.

Skijoring started back in the early 1900s and was an exhibition sport at the 1928 Olympics.

The term is Norwegian and can be loosely translated as ‘ski driving’.