Around 150 beachgoers were hit by a mystery illness over the bank holiday weekend that left children struggling to breath, it has been revealed.

Emergency services were sent to Walton, Frinton and Clacton beaches in Essex on Sunday afternoon amid reports of breathing problems in the area.

One mother said her daughters were ‘coughing and gasping’ and could not form words properly, as beachgoers were told to get out of the water.

It has now been revealed that around 150 people were affected by the incident, with some, including children, taken to hospital as a result.

Some beachgoers said they had heard speculation of a fuel spill, but authorities said there was no immediate evidence of one.

One mother who was on a family day out at the busy beach told how her one of her twin daughters was left ‘gasping’ for breath. 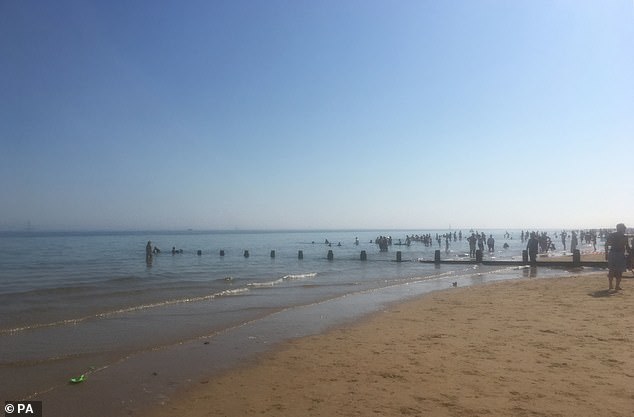 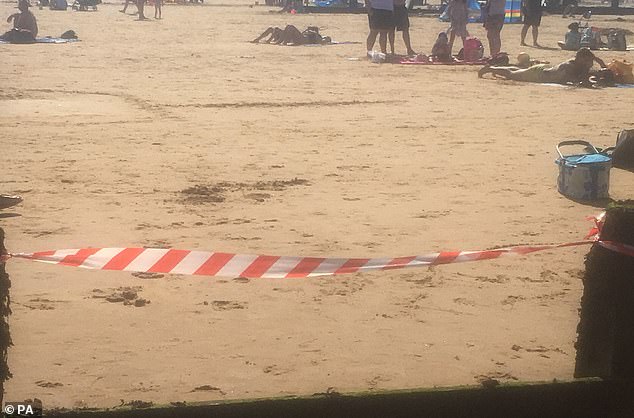 Miriam Lansdell said: ‘My daughter started coughing. She said “I don’t feel good. It hurts to breathe in”. My other daughter was gasping and couldn’t form words because she couldn’t breathe well enough.’

The 45-year-old mental health worker from Derbyshire, who was visiting her parents in Essex for the bank holiday weekend, said she had also had difficulty breathing as she lay on the sand drying off after a dip in the water.

She said they all began to breathe easier when they moved further away from the beach, but took the 10-year-old girls to a walk-in clinic to be checked over by medical staff.

Ms Lansdell said her father had been told by someone in a speedboat, who he assumed to be associated with the coastguard, that there may have been a fuel spill.

She said: ‘My dad said he had been asked to get out of the water by a man on a boat. He asked why and the man said there had been a fuel spill. He said if anyone is having breathing difficulties they should probably call an ambulance.’

However, the Maritime and Coastguard Agency – which sent a counter pollution aircraft to the scene in Essex – said there was no immediate evidence of this.

Ms Landsdell added: ‘It’s not what you expect when you go for a day out to the beach.’ 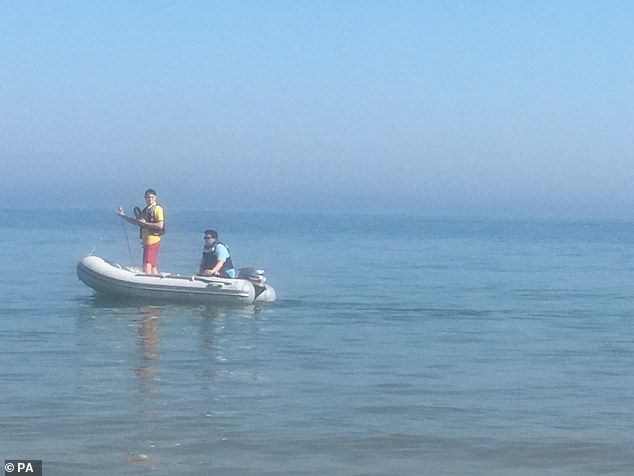 Training manager Mark Wray who was at the beach with his wife, said he had noticed a few children coughing as they came out of the sea but assumed they had swallowed some water.

He said a few hours later two men from a beach patrol started going backwards and forwards in a dinghy along a short section of the beach, about 50 feet from the shore, urging people to move back, but that there was no clear instruction to get out of the water.

He added: ‘Then others, with radios, began patrolling the beach and starting to tape some areas off. It was all very low-key and there didn’t seem to be much urgency to it.

‘But as we were heading home a procession of emergency vehicles, including ambulances, fire appliances, police cars and other unmarked vehicles with blue flashing lights started heading towards the scene.’

He said the beach was ‘packed with hundreds of families enjoying the record-breaking temperatures’. 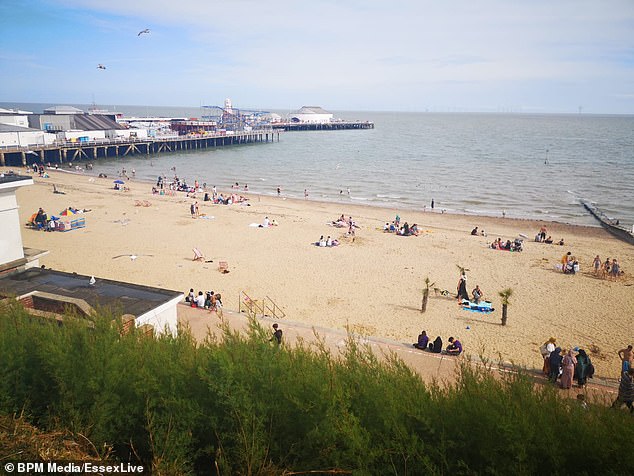 One mother said her daughters were ‘coughing and gasping’ and could not form words properly, as beachgoers were told to get out of the water (pictured, Clacton Beach)

Speaking the day after the incident, Will Lodge, Communications Manager for Tendring District Council – who confirmed the number of those affected – said official advice remained to avoid going into the water.

‘We are pleased that no further reports of illness have been received, and we will continue to monitor the situation,’ he said.

‘While we await the results of lab testing, from our colleagues in the Environment Agency, Public Health England and supported by Essex County Fire and Rescue Service, our advice remains to avoid going into the water.

‘If you do go into the water and feel unwell then rinse and change your clothes, drink some fresh water, and this should alleviate any symptoms. If you are still concerned then please call the non-emergency health number, 111.

‘We are hopeful that, with two tides passing through, the cause of this incident – whatever – it may have been, will have passed. However, we will not be complacent and will continue to review the situation.’

‘We will provide updates as and when appropriate.’

Symptoms reported at the time included irritation of the eyes, coughing or tickly throat, and some minor difficulty breathing.

The Met Office declared it the hottest August Bank Holiday weekend ever with temperatures reaching 92F at Heathrow.

One person tweeted that there were ‘lots of people coughing heavily’, while a mother said her son began coughing after swimming and had to be given his inhaler.

Another said: ‘We have just left Frinton and have seen lots of fire engines on the way out. Has there been an incident? We were on the beach and all developed a cough and were struggling to breathe.’

A spokeswoman for East of England Ambulance Service said: ‘We are aware of an incident on Sunday 25 August with reports of a number of people suffering from coughing on the seafront off Fourth Avenue, Frinton.

‘We are assisting the police and fire services with this incident. The cause is currently unknown.’

On the day of the incident, Alex Porter, TDC Cabinet Member for Leisure and Tourism, said there was no reason for people to be alarmed.

‘No-one has been seriously hurt, and while work is ongoing to establish the cause it would be unwise to speculate,’ Councillor Porter said.

How years of US pressure got Ecuador to hand over Julian Assange
Oil firm on Iran sanctions, but rising US supply and...
Why eating a lime lolly in the sun can leave your child with horrific burns
Ex-Tories Philip Hammond and Amber Rudd wreak revenge on Boris Johnson in Brexit deal vote
Mental health of three generations has been harmed by the Holocaust, research suggests
Conor McGregor's long awaited return UFC return brings the out celebs as Chris Pratt and Mel Gibson
Britain's Gran Talent: Singer, 96, with Alzheimer's will become BGT's oldest ever contestant
Meet the NHS volunteers making a difference from an ex-security guard, 87, to a former nurse