More than 200 crew members on board the Ruby Princess are showing coronavirus symptoms.

There are fears the sick crew could overwhelm New South Wales hospitals if they require medical evacuation.

The highly-infected cruise ship is still floating off the NSW coast.

More than 500 confirmed cases of COVID-19 and seven deaths are linked to the ship after passengers were allowed to disembark in Sydney on March 19 without any medical checks.

There are fears more than 1,000 crew who remain stranded on board could contract the virus.

On Thursday police escorted doctors to the Ruby Princess cruise ship after a seventh passenger died from coronavirus. 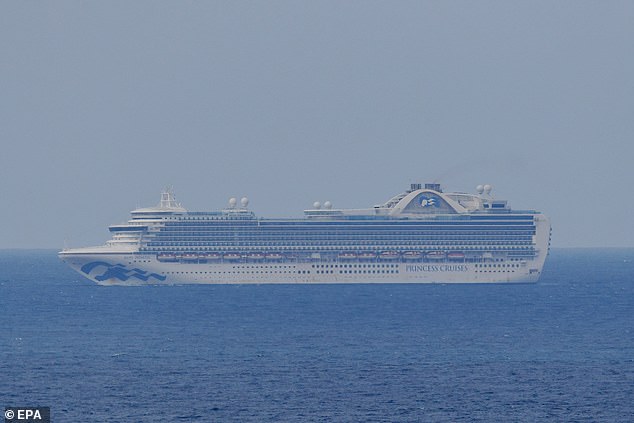 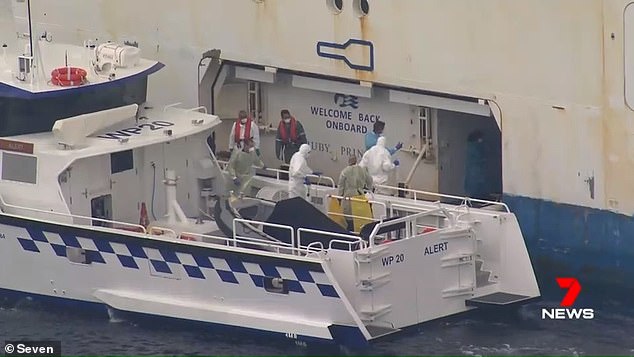 The Marine Area Command helped NSW Health and an independent medical team board the ship. Police did not board the vessel

The Marine Area Command helped NSW Health and an independent medical team board the ship. Police did not board the vessel.

There are nearly 600 infections linked to cruise ships, including more than 500 cases from the Ruby Princess and 74 from the Ovation of the Seas.

He died in Toowoomba Hospital overnight.

NSW Police said a 66-year-old crew member was also taken off the Ruby Princess for medical treatment on Thursday.

‘The NSW Police Force is also assisting with a number of medical evacuations and transfers of Australian crew members from several cruise ships anchored off Sydney,’ police said. 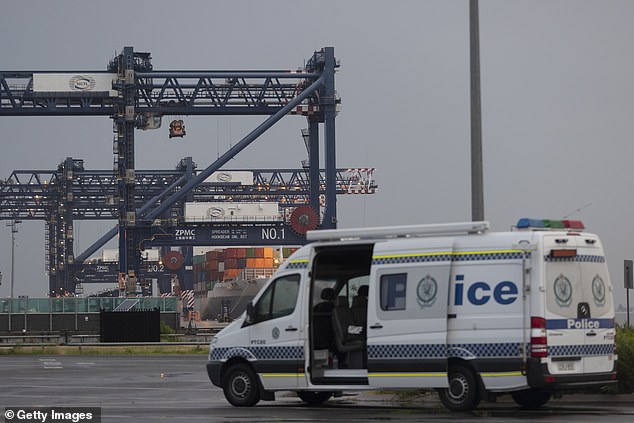 A police van is seen at Port Botany. Earlier today a passenger was evacuated from the Ruby Princess Cruise Ship 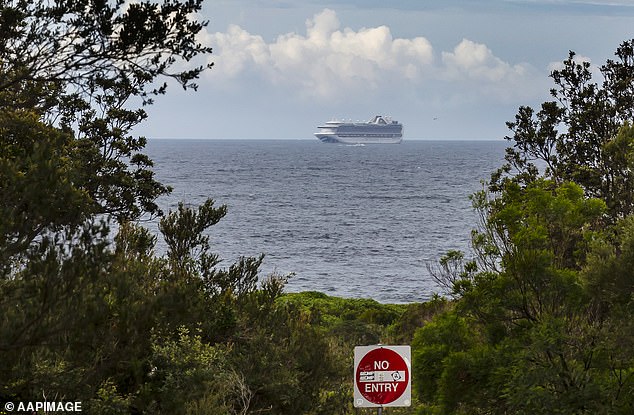 Eight cruise ships have been locked in a stand off with the New South Wales government for nearly three weeks after refusing to leave Australian waters and go back to their country of origin. Pictured: Ruby Princess is seen from Kurnell National Park in Sydney on Thursday

They have also assisted with the medical evacuations and transfers of Australian crew members stuck on several ships anchored off Sydney.

The number of confirmed COVID-19 infections in NSW has reached 2,298, with 116 new cases announced on Thursday morning.

NSW Opposition Leader Jodi McKay told Seven News on Wednesday that there was a number of cases on the cruise ships but no one seemed to know whose responsibility it was to deal with it.

‘Over 1000 crew are still on board. We must test every crew member with symptoms,’ she said.

‘My thoughts are with everyone caught up in this incredibly distressing situation.’

She said there has been no explanation on the matter.

Eight cruise ships have been locked in a stand off with the New South Wales government for nearly three weeks after refusing to leave Australian waters and go back to their country of origin.

Cruise companies Carnival Australia and Royal Caribbean International haven’t budged after the Federal Government on March 16 banned cruise ships from docking at Australian ports to stop the spread of coronavirus.

They appealed against the order to ABF Commissioner Michael Outram, with a decision expected in the coming days.

The Pacific Explorer, ­Carnival Splendour, Ovation of the Seas, Spectrum of the Seas, Radiance of the Seas, ­Voyager of the Seas, Celebrity Solstice and the highly-infected Ruby Princess remain off the coast of NSW.

There are between 800 and 1300 people stranded on board each ship.

Once crews have been treated, the federal government will increase pressure on foreign cruise companies to sail away from Australia rather than risk flooding NSW hospitals with COVID-19 patients. 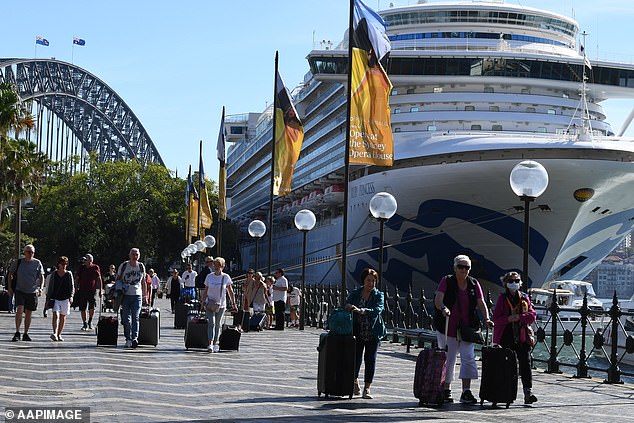 There are nearly 600 infections linked to cruise ships, including around 500 cases from the Ruby Princess (pictured docking inSydney on March 19) and 74 from the Ovation of the Seas 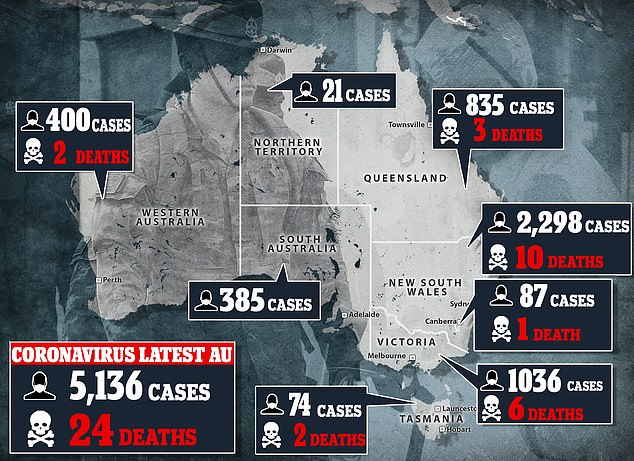 The number of confirmed COVID-19 infections in NSW has reached 2,298, with 116 new cases announced on Thursday morning. Nationally more than 5,000 have been infected and 24 have died

In an attempt to end the stalemate, NSW Police Commissioner Mick Fuller said helicopters will be used to fly doctors on board.

‘At first they will go on and they will do an assessment and the standard temperature check and ask questions around symptoms of the virus,’ Mr Fuller told reporters on Thursday morning.

‘If the crew is fit and healthy, I have no hesitation in asking Minister Dutton to enforce the orders for them to leave our shores.’

Anyone requiring urgent medical attention would be brought ashore.

All known Australian crew members have already been extracted.

Carnival Cruises, which operates the Ruby Princess, on Monday called on the government to adopt a humanitarian approach and enable the company to repatriate the foreign crew left onboard.

* Five of the dead were residents of a Sydney aged care home, Dorothy Henderson Lodge, nine had been on a cruise, including five from the Ruby Princess which docked in Sydney on March 19.

* The average daily increase in cases has been at nine per cent for the past three days, down from 25-30 per cent a week ago.

* Free child care for people still in paid work in a $1.6 billion package to childcare centres

* A $130 billion JobKeeper program to subsidise wages at $1500 a fortnight for six million workers, for up to six months. Parliament set to approve on Wednesday.

* So far, the federal government has committed $320 billion, or 16.4 per cent of gross domestic product, to combat the virus’ health and economic effects.

* More than 34,000 extra hospital beds have been made available from the private sector.

* Australians returning home from overseas must be quarantined for two weeks in hotels or other accommodation before being allowed home.

* Gatherings of more than two people have been banned indoors or out.

* People flouting social distancing, isolation or quarantine orders face fines of $1000 or more in most states, up to $13,345 in Queensland.

* Western Australia has passed new laws with people who assault frontline workers including police, doctors and bus drivers can be jailed for up to 10 years and seven years for threats to do with coronavirus.

* People aged over 60 with chronic illness are discouraged from leaving their homes unless they need medical care.

* Doctors will be flown onto foreign cruise ships floating off NSW to test and evacuate patients needing urgent treatment.

* All elective surgery in public facilities put on hold.

* People will be able to access Medicare-funded online consultations.

* School holidays in Queensland, SA and WA also brought forward with only children of parents who have essential jobs allowed to stay.

* Moratorium on renters being evicted for the next six months. Commercial renters will see new measures on Friday.

* Major retailers have closed their bricks and mortar shops but continue to trade online.