A new morgue which can hold thousands of tragic covid-19 victims, including those from the Nightingale coronavirus hospital, is being built in East London.

The mortuary, about the size of two football pitches, is being developed on forest land close to the City of London crematorium and cemetery and is expected to take the dead from the new Nightingale Hospital at the ExCel Centre.

The morgue’s proximity to the hospital, which is less than three miles away, and the cemetery has been planned to make it easier to ferry bodies from the temporary mortuary to their final resting place or the furnaces.

The grim news of the development was relayed to local residents in letters placed through their letter boxes from Newham Mayor Rokhsana Fiaz. 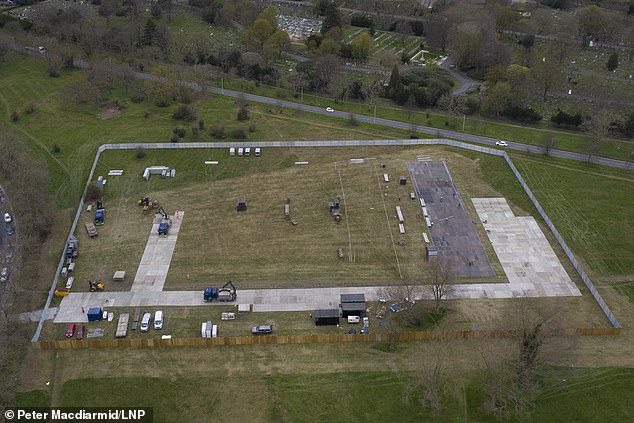 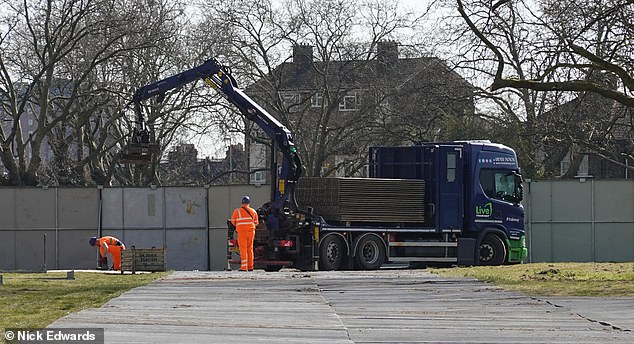 The mortuary, about the size of two football pitches, is being developed on forest land close to the City of London crematorium and cemetery 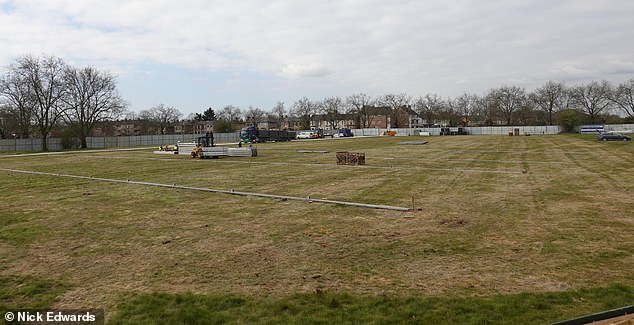 Around the same time builders began erecting wooden fencing around the site and diggers moved in.

The construction of the mortuary is the latest development to battle the pandemic after the government put up make-shift testing facilities at Ikea in Wembley, and another swabbing site at Chessington.

Downing Street is desperately trying to ramp up the number of checks carried out, amid fears 85 per cent of self-isolating NHS staff might be off unnecessarily due to a lack of screening. No10 today admitted just 2,000 frontline NHS workers have been tested for coronavirus. 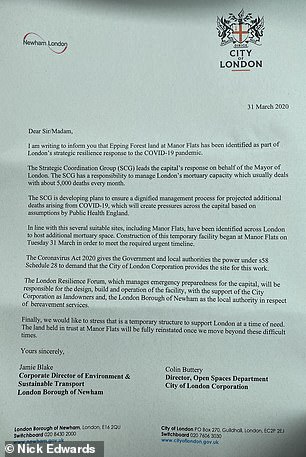 Ms Fiaz wrote: ‘The facility will act as a holding point before a respectful and dignified cremation or burial can take place to send a loved one on their final journey.’

‘We know that coronavirus is deadly and so far 1,789 people have died in the UK. We know that the number of deaths will rise.

‘That is why as part of the Government’s response, additional mortuary space is being found and one of those is Manor Flats in the Manor Park area of Newham.’

But she warned families of coronavirus victims; ‘Sadly relatives will not be able to visit the site.’

She added: ‘They (Public Health England) have also strongly advised that mourners should not take part in any rituals or practices that bring them into close contact with the body of the person who has died from or with symptoms of oronavirus since there is a small but real risk of transmission from the body of a deceased person.’

She admitted that residents would be concerned about ‘increased risks of infection’ by the preparations for the hospital and had produced an ‘FAQ’ sheet to help them.

Nightingale Hospital is expected to house 500 patients this week and it has a capacity to treat 4000 victims.

As of last night the number of people in Newham suffering from coronavirus stood at 287.

Local resident Joe Clancy said the first people living opposite the massive morgue knew about it was when fencing was put up. 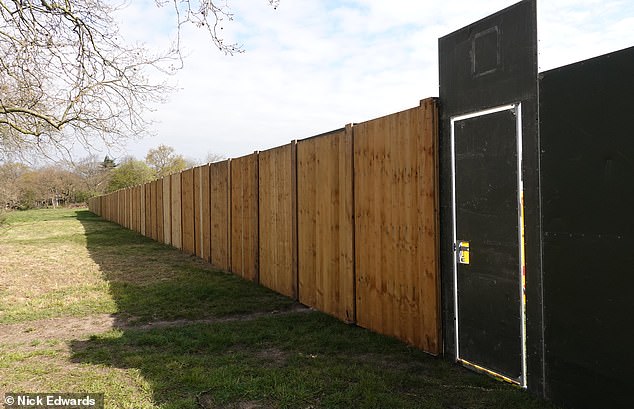 The building work for the mortuary started yesterday. Families of victims will not be able to visit the site

Mr Clancy, 68, a retired journalist, said: ‘I asked one of the workmen what was happening and he said he didn’t know, but believed it was connected to coronavirus.

‘It was only when I got the Mayor’s letter that it was confirmed as a massive morgue.

‘It is pretty depressing to think all those bodies will be stored right opposite my home where I can see the morgue, but these are extremely difficult times.

‘It looks as if it can hold tens of thousands of bodies, and that is very frightening.

‘Everyone around here is astonished at the speed it went up. Lorries and vans stated arriving before nine in the morning and by mid afternoon the area had been completely fenced off.

‘People are concerned about the noise from generators that may be used to keep the bodies cool, and the disturbance from floodlighting and extra traffic the facility will cause. 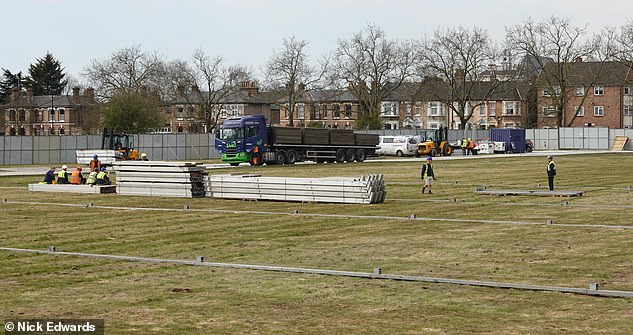 ‘We obviously hope that everyone abides by the rules for keeping safe and that the morgue will never be used to its maximum capacity.

‘We have to sympathise with the families and ther officials. It is an awful thing the world is going through.

‘We know that the coronavirus can be extremely virulent and at least professionals will be dealing with the removal and storage of bodies.

‘I don’t think of any of the residents living opposite the morgue will worry too much about infection from it, but it is a really depressing thing to happen to the neighbourhood.’

By James Gant for MailOnline

Preparations are under way to convert an ice rink in Milton Keynes into an emergency mortuary ‘in a matter of days’.

The Planet Ice venue in South Row will act as a temporary mortuary in the event local funeral directors are unable to hold bodies.

A Milton Keynes Council spokesman said: ‘As part of sensible planning we are considering what additional temporary mortuary facilities may be needed in Milton Keynes if funeral directors are unable to cope with a rise in deaths from Covid-19. 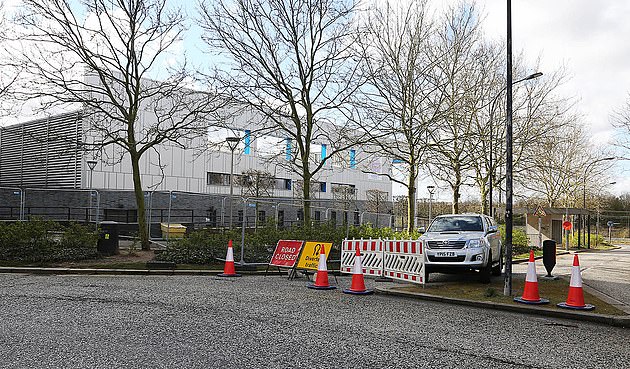 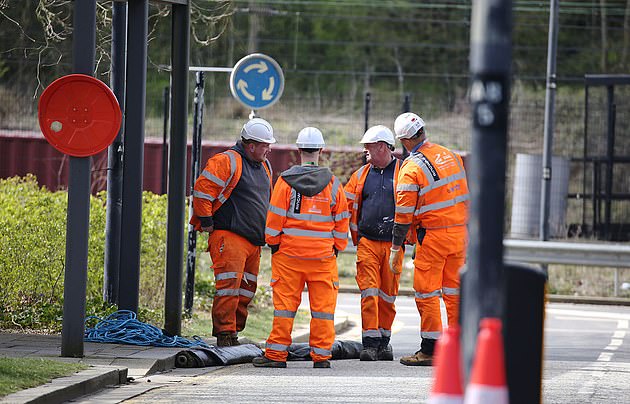 ‘We’re working with the owners of Planet Ice to ready the rink as a precaution should it be needed to support local operations.

‘Part of Elder Gate (starting from South Elder roundabout) and a short section of Avebury Boulevard will be closed temporarily to facilitate this. The supermarket access is unaffected.

‘Ice rinks elsewhere in the UK have previously been used as temporary mortuary facilities, as their existing infrastructure can typically be adapted faster and more effectively than other buildings.’

It comes after work began on a temporary mortuary at Birmingham Airport which could hold up to 12,000 bodies in a worst-case scenario. 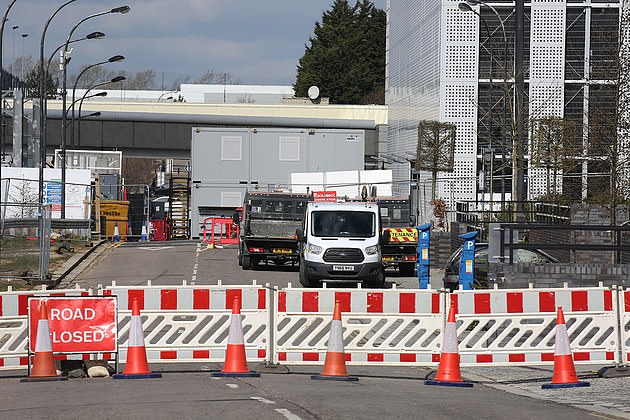 The local authority is keeping the 2,800 capacity ice rink open to ensure the venue remains at the temperature needed for the temporary morgue (pictured, outside it on Tuesday) 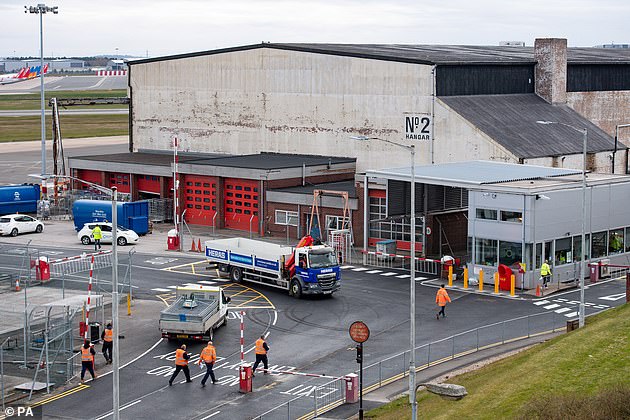 It comes after work began on a temporary mortuary at Birmingham Airport (pictured on Monday) which could hold up to 12,000 bodies in a worst-case scenario

Milton Keynes Council leader Peter Marland said the local authority is keeping the 2,800 capacity ice rink open to ensure the venue remains at the temperature needed for the temporary morgue.

He said work to convert the rink would take ‘a matter of days’ and predicts the venue could hold bodies ‘in the hundreds’.

He added: ‘We have been planning for a while around capacity as we picked up quite early that it could be an issue for us.

‘We only have one crematorium and the next nearest one is in Wing.

‘If the worst is to happen we wanted to make sure that that person and their family had as much dignity as possible.’