A mosque-based scout group is being investigated by police after links to an ‘Islamic extremist’ preacher and claims that the group leader encouraged girls as young as five pose in videos, advocating wearing the hijab.

The scout group for ages 10-14, based in Lewisham Islamic Centre in south east London, is linked to Imam Shakeel Begg, who has in the past lost a libel case against the BBC for dubbing him an extremist.

The Telegraph uncovered these links in an investigation that also found that the scout group leader Ahammed Hussain segregated groups by gender, going against the organisation’s values.

Imam Shakeel Begg, from the Lewisham Islamic Centre, has been described as an extremist

Hussain has since been suspended pending a police investigation into safeguarding concerns.

It was he who admitted encouraging members to be ‘Muslim first’, despite the Scouts commitment to ‘British values’.

Back in December, the new chief ambassador for the global scouts movement – Bear Grylls – said the scouts can lead the fight against extremism by recruiting young Muslims in the UK.

He told the Sunday Telegraph: ‘We have hundreds of mosques every week, reaching out, asking, ‘Can we start up groups?’

Contrary to the Scouts leading the fight against extremism, court records between 2010 and 2014 reveal that the mosque invited Bilal Philips and Haitham al-Haddad to speak at the mosque.

The first was described by the US government as a co-conspirator in the 1993 World Trade Centre bombings.

He wasn’t able to complete his address due to being banned from the UK in 2010.

The latter, al-Haddad, has advocated female genital mutilation and denounced homosexuality as a ‘criminal’ act. 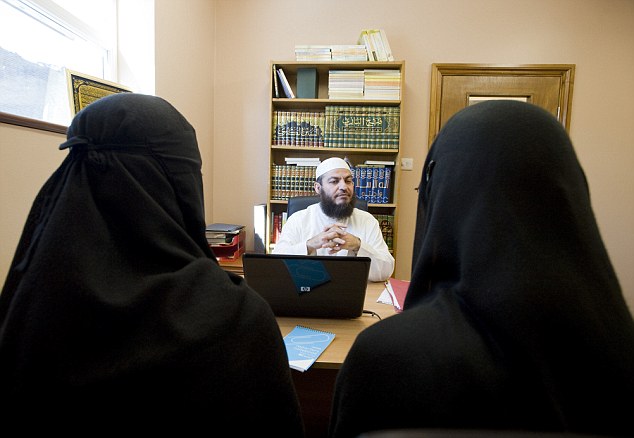 Haitham al-Haddad pictured in 2009. He was invited to the Lewisham Centre to speak, despite advocating female genital mutilation and calling homosexuality a ‘criminal act’

Shakeel Begg has also slammed UK police and said they are leading a campaign against Muslims, attempting a ‘genocide’ against them.

He also promoted a group that described ISIS executioner Jihadi John as a ‘beautiful man’.

A spokesperson for the Henry Jackson Society, an anti-terrorism group, called Shakeel Begg an extremist ‘categorically’ and described Hussain’s association with extremist groups as ‘concerning’.

A spokesman for the Scouts said they were ‘opposed to extremism in any form’ and added that they reported the allegations to the Met Police.

They added: ‘The safety of young people in our care is our number one priority.’

The Mail Online has reached out to both Hussain and the Lewisham Islamic Centre for comment.

Victoria Beckham admits it's taken her years to accept her 'imperfections'
Sky presenter brands Virgin Trains a 'national disgrace' for charging £338
'Meghan's a jinx!' Duchess of Sussex watches friend Serena lose Grand Slam final for the THIRD TIME
First volunteers are injected in the UK's coronavirus vaccine trial
Boris Johnson's fury as Donald Trump wades into election to back Nigel Farage
Brexiteer fury as Corbyn reveals his shopping list for soft Brexit deal with May
Supermarkets have slashed the price of festive fizz just in time for Christmas
Israeli soldiers may have committed WAR CRIMES by killing 189 Palestinians during Gaza protests