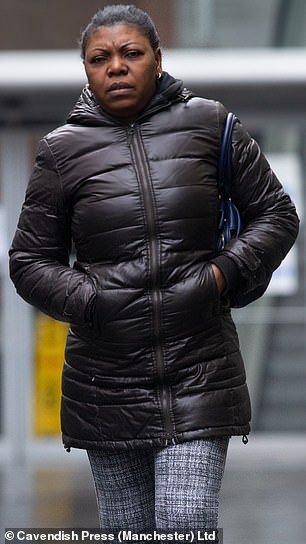 Janet Samson, 41 (pictured outside Manchester Magistrates Court) was caught doing 38mph in a 30mph zone near her Manchester home three times between October 2017 and January 2018

A mother-of-three caught speeding three times by the same camera has been banned from driving despite claims she needs a car to take her children to school.

Janet Samson, 41, was caught doing 38mph in a 30mph zone near her Manchester home three times between October 2017 and January 2018.

She was given nine penalty points for the three offences and a further six for twice failing to declare she was the person driving the car.

Samson begged Magistrates in Manchester to let her keep her licence, claiming she would struggle to get a bus two miles to work and it would be ‘very hard’ to collect her children from school.

But the Magistrate was unconvinced, telling her: ‘I’m sorry but we don’t think those circumstances count as exceptional.

‘We appreciate it will make things difficult but not exceptionally difficult.

‘Therefore we have to uphold and impose a six month ban from driving.

‘We understand what you say but your driving has been so bad that it has resulted in you being disqualified.’

The hospital cleaner at North Manchester General Hospital wept as she explained how the ban would bring her ‘exceptional hardship’.

She told the court: ‘I need to take the kids to school, Yes I can go by bus but it is going to cause a lot of problems.

‘I have to be at work for 3.15pm so wouldn’t work for me to get buses to take kids to and from school.

‘It’s going to make things very hard for me. I have two kids I have to bring to school and bring them back.

‘This will make it very hard for me and this will really affect me and my children. I’ll have no one to get them for me.’

The camera that caught Samson is located in Victoria Avenue East, Blackley, Manchester, near her home in Moston.

It captured her Honda Jazz well over the speed limit on three occasions, which on top of the six points for failing to declare the driver, pushed her three points over the 12-point threshold for disqualification. 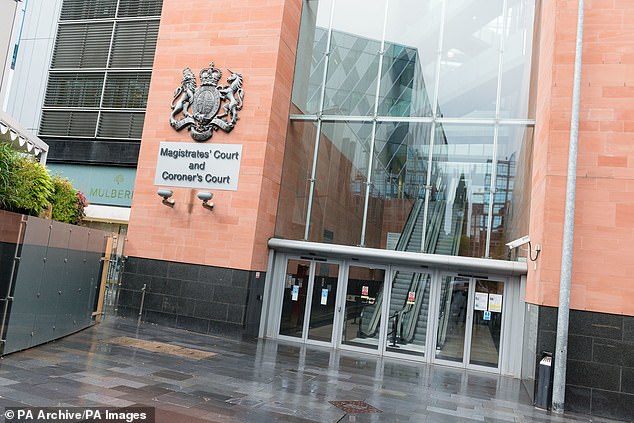 Samson begged Magistrates in Manchester (court building pictured) to let her keep her licence, claiming she would struggle to get a bus two miles to work and it would be ‘very hard’ to collect her children from school, but she was banned anyway

Samson, whose children are aged 12, 10 and eight, told the hearing her 4pm to 10pm shifts overlap with her Italian husband’s 6am to 6pm job as a security guard, which means he would be unable to take over the school run from her.

The court heard the primary school is a 10-minute car journey from the family home.

‘I can go on bus to work but to where I work from where I live is going to be hard. I can’t leave my kids at home.

‘My husband is here now. He has just joined me from Italy and he is a security guard in Bolton. He works 6am-6pm and me and my husband overlap work hours.’

After the hearing she was overheard complaining: ‘This will cause me a lot of problems. This will be very bad for me.’