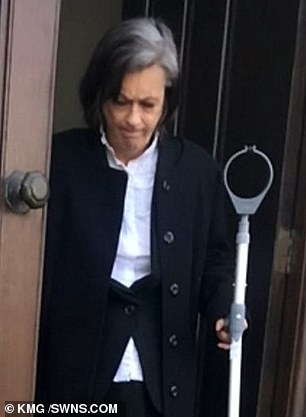 Vanessa Adamson (pictured), 55, from Kingswood, Kent was handed a 36-month disqualification and a 12-month community order at Maidstone Magistrates’ Court today. She must also carry out 120 hours of unpaid work

A mother who was caught driving while four times over the limit has been spared jail – after claiming a prison term ‘would have killed her’.

Vanessa Adamson, 55, was found driving to a Nisa off-licence in Kingswood Kent, on December 13 last year before a concerned member of the public stopped her.

The mother-of-two claimed to have a ’20-year alcohol addiction’ – which saw her try to park outside the village shop while under the influence.

A concerned member of the public approached her and took the keys from the car before she could return home.

Prosecutor Deborah Jones said: ‘It was suspected the defendant driving the vehicle may have been drinking and over the limit.

‘She was seen trying to drive onto the forecourt of Nisa Local – a witness went over to speak to her and asked for the keys.’

Adamson, who used to work in charity shops, conceded she needed help and reluctantly handed over the keys to her car.

Police arrived at the shop and tested Adamson for drinking, and she gave a reading of 139mg of alcohol in 100ml of breath – the legal limit is 35mg.

Defending, James Warren said: ‘She has been absolutely dreading this day. If she goes to prison she is going to die in there.

‘She told police officers she is an alcoholic and this problem has got worse and worse. We could be in a different position here.

‘Yes it was a high reading and yes it was early in the morning and fortunately, there wasn’t an accident.’

Maidstone Magistrates’ Court heard how her problem with alcohol began when her father died in 2000 and she never truly came to terms with it.

Magistrates were also told that she was driving without a licence after it was revoked in June 2018 following concerns raised by her own children.

Her GP had written to the DVLA and her licence was revoked. The court also heard how a nerve had been removed from her leg.

Adamson, of Kingswood, admitted drink driving and driving without a licence but revealed she had no desire to drive again.

She was handed a 36-month disqualification and a 12-month community order. She must carry out 120 hours of unpaid work.

Magistrates also ordered her to pay £85 costs and a further £85 victim surcharge for the incident on December 13.