A mother-of-three who travelled to Tunisia for fertility treatment was horrified when UK doctors told her ‘no surgery had been carried out’.

Kelly Thompson, 44, decided she wanted to reverse the effects of her sterilisation procedure when she met her now fiance Dean Thorpe, 46.

The couple were desperate to have a child together but couldn’t afford the £5,000 it costs to have the operation done privately in the UK, so instead shelled out £3,700 on flights, accommodation and treatment abroad. 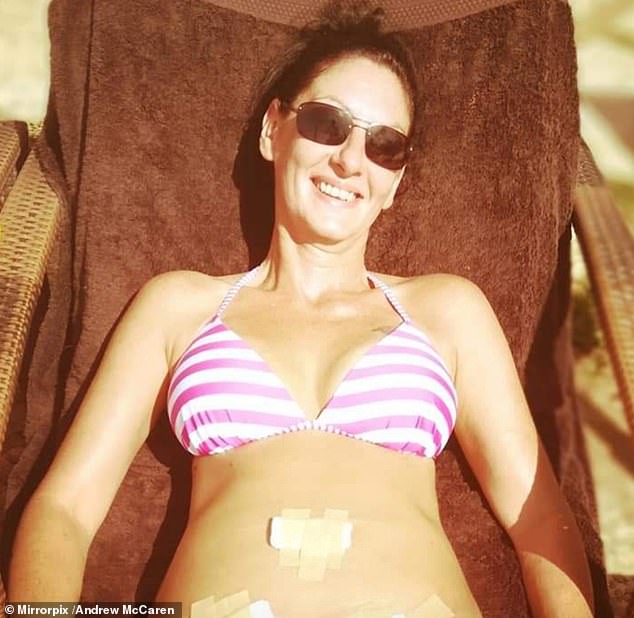 Kelly Thompson, 44, (pictured recovering from her operation) flew to Tunisia to have an operation to reverse the sterilisation procedure she had done when she was 26, but UK doctors said no surgery had taken place

After five months of failing to conceive they sought help from a fertility clinic back home in Leeds – where doctors told them there was no evidence any surgery had ever taken place.

Ms Thompson told the Mirror: ‘I feel violated. Our dream has been destroyed.

‘The operation was emotionally and physically draining, but I left Tunisia overjoyed and expecting to be a mother. When I was told it had not even been done, I felt sick.’

The mother-of-three had the original sterilisation procedure after having her third child Grant, 17, at the age of 26, with her then husband.

But after finding love again with trainee painter decorator Dean, who has two children from a previous relationship, the pair became ‘obsessed’ with having a child of their own.

Ms Thompson worked through the night and did overtime to save up the money to have a reversal procedure at Clinique Pasteur in Tunis last September.

She was put under general anaesthetic and despite having no consultation beforehand was told the operation had been a success.

But to her dismay five months later, UK doctors told her there was only evidence she had been sterilised and nothing to suggest it had been reversed.

Mr Thorpe is believed to have suffered a stroke last week, which his fiancee thinks is due to the stress.

The surgeon who carried out the procedure in Tunisia told the Mirror she had undergone keyhole surgery and it was ‘well done’.