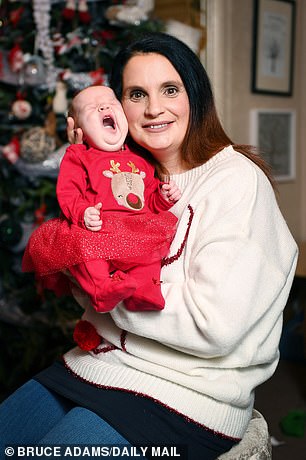 A mother of 21 children shocked TV viewers when she revealed that she was just 13-years-old when she became pregnant to the man who is now her husband, despite the fact that he was 18 at the time.

Sue Radford appeared on Channel 4’s 21 Kids and Counting on Thursday evening, 3 January, with her husband Noel as she prepared to give birth to her youngest daughter Bonnie Raye.

Both family and friends of the couple were shocked at the revelation of the latest pregnancy, with her children appearing on camera to state that they hadn’t believed their 43-year-old mother when she had first revealed the news.

One friend Chloe, joked that ‘she had obviously stopped taking her contraception’, while son James, aged 15 said he had always wondered what went through his parents’ minds and said they ‘didn’t know when to stop’.

The fact that Noel, then her boyfriend and now her husband, was 18 at the time also raised eyebrows

At the end of the episode it was revealed that she had successfully given birth after just 12 minutes in labour, however many viewers were distracted over a revelation earlier on in the programme that Sue had actually given birth to her first child with husband Noel when she was 13-years-old and he was 18. 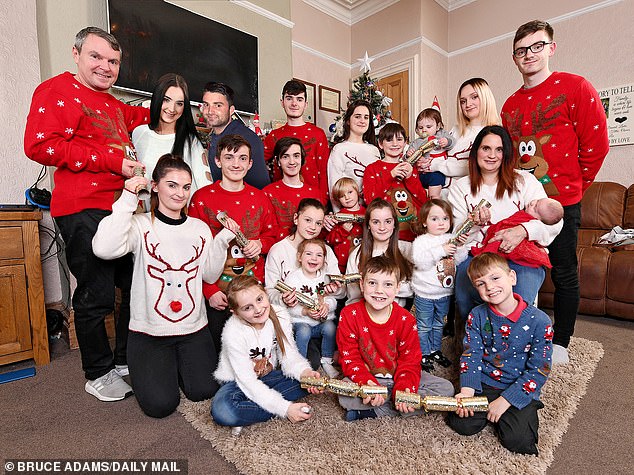 One viewer Paige O’Neill said: ‘I can’t get over the fact that an 18 year old got a 13 year old girl pregnant, I mean that’s a crime!’

This is while another viewer called Rebecca said: ‘so he first got her pregnant when she was 13 and he was 17/18? Disgusting. Also, no way his pie shop can fund all that’.

Another viewer Nina Marshall complemented the children and ‘how lovely’ they were but said the situation was ‘weird’.

She said: ‘They are lovely kids but I can’t help but feel a bit weird about the fact when he was 18 he got a 13 year old pregnant.

While another exclaimed: ‘Did he really have a kid with her when she was a child!?#21kidsandcounting.’

A whole lot of mouths to feed! The Radford family’s budget

The couple receive £170 per week in Child Benefit and survive on Noel’s just under £50,000 salary.

They spend around £300 a week on food shopping and carefully plan their batch-cook to make sure it feeds everyone.

They have a budget of £100 for their children’s presents at birthdays, while at Christmas they set aside between £100 to £250.

The show highlighted the financial plight the family is set to face with another child on the way and showed Mr Radford working in the pie shop that he runs with the help from his daughter Chloe. However some viewers took to social media to stress the ‘burden’ they were putting on public services.

One view said: ‘I don’t get what’s inspiring about this family. Pregnant at 13 by an 18yo, continue to breed without a card to the burden they’re putting on the environment or public services. No admiration from me. #21kidsandcounting.’

However Mr Radford stressed that the family were not on benefits and that most people just assumed that they were and that the rest of society was ‘paying for them’.

Just last year Mrs Radford spoke to This Morning hosts Eamonn Holmes and Ruth Langsford about her easy labour with her last child.

Speaking on the This Morning sofa she said: ‘She was very quick she was not hanging around – I think they’ve got my labour down to about 12 minutes.

‘I said definitely no more last time. I think we just love having a big family. Welcoming a newborn into our life.

‘If it’s an addiction we’re giving it up. We’ll always have lots of grandchildren.’

Apprentice star Michelle Dewberry to fight Hull West & Hessle for Brexit Party
Shocking moment gunman shoots boy, 15, and 35-year-old man in the street in broad daylight
Brussels 'will offer Boris Johnson yet ANOTHER Brexit extension'
Soviet spy radio that was buried in a former forest in Germany is discovered in mint condition
Corbyn: Labour `ready to take the fight to the Tories´...
Last of a dynasty: The story behind 'poor little rich girl' Gloria Vanderbilt who died Monday at 95
Greggs bans Newcastle pub from using name Dirty Thoughts of Cheryl Cole burger with its sausage roll
SAG Awards: Phoebe Waller-Bridge leads the Brits with Catherine Zeta-Jones and Helena Bonham Carter