A mother-of-two died after dousing herself with petrol in a bid to ‘scare’ her husband over his affair, an inquest heard.

Ambreen Hussain died in hospital four days after catching fire at her home in Teesside on November 13 last year.

Footage from CCTV cameras on her property showed the 35-year-old pouring petrol used for a child’s scooter over her body and standing in the back garden with a lit piece of paper.

Mrs Hussain was not seen applying to the paper to her body, but footage captured the moment it sparked a fire, engulfing her in flames.

Her husband of 15 years Mobeen frantically tried to extinguish the fire, and was seen on the footage throwing a pan of water over his wife and desperately trying to put out the flames with his bare hands.

Despite his efforts and those of neighbours in the front garden, Mrs Hussain died in Newcastle Royal Victoria Infirmary on November 17.

A post mortem gave her cause of death as multiple organ failure due to burns which affected more than 90 per cent of her body.

Acting Detective Inspector Jeremy Commons of Cleveland Police told the inquest the property’s CCTV cameras captured Mr Hussain coming to his wife’s aid and wrapping his arms around her in an attempt to put the flames out. 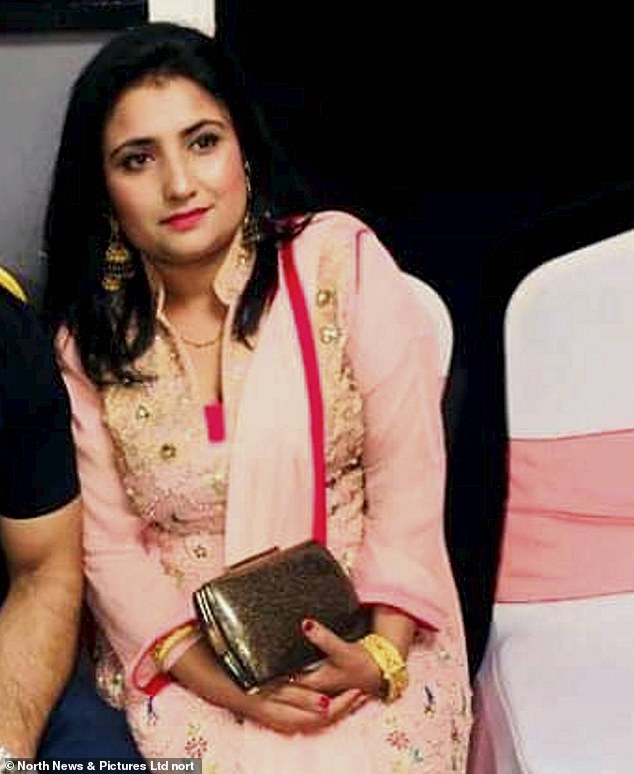 He then took her out the front door, with Mrs Hussain still walking, and neighbours tried to help as they wrapped her in cling film.

He told the inquest there was ‘no indication that his wife was going to do what she did.’

In a statement read to the coroner, Mr Hussain said problems with their marriage had begun six months earlier, when Ambreen found out about his affair.

On November 13 they argued and she went into the kitchen. He said he saw her ‘pouring something over herself’ then she ‘instantly caught fire’.

Mr Hussain, who is still being treated for hand injuries, said: ‘It was all just a blur – I was trying to put the fire out with my own hands.

‘I do not think she meant to set herself on fire – I think she was just trying to scare me.’

Assistant coroner Jo Wharton said Mrs Hussain was a ‘much-loved wife, mother and daughter’ and had been ‘angry’ following the argument with her husband.

He said: ‘It was petrol that Ambreen poured over herself in the back garden. She then went into the kitchen and came back out, when she had in her hand a white piece of paper, alight. She poured more petrol over herself and suddenly became engulfed in flames.’

She said that to record a suicide verdict, she had to be satisfied Mrs Hussain took her own life and intended to do so – and could not be satisfied that was her intention.

Recording a misadventure verdict, she said: ‘Her death was attributed to an accident that occurred due to a risk that was taken voluntarily.’