This is the shocking moment two mothers start brawling on the ground in front of young children outside a primary school after one accused the other of ‘bullying’.

The women had to be dragged apart by other parents as screaming children looked on in horror near the entrance of Carr Infant School in York on Tuesday morning.

The fight broke out after a woman with long blonde hair- seen holding a toddler – accused her rival of ‘bullying’ somebody else and dared her to try and ‘f****** bully me’. 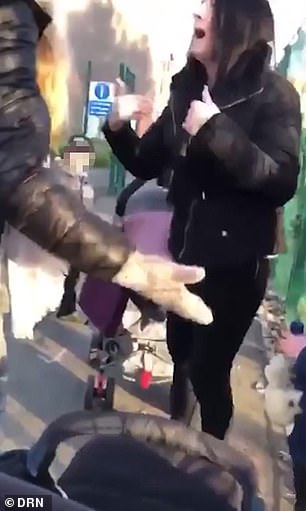 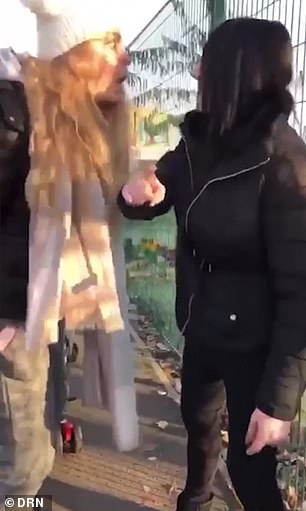 The mother begin arguing near the entrance of Carr Infant School in York (left). The woman with long blonde hair accuses the mother in the black coat of ‘bullying’ somebody else (right)

Footage shows the mothers yank at each other’s hair before falling to the ground in a heap.

During the brawl they appeared to knock a little girl off her bicycle before other parents rushed to separate the women.

The school said police are investigating and described the incident as ‘serious’.

Video filmed by an onlooker was shared anonymously on social media last night and has since gone viral. 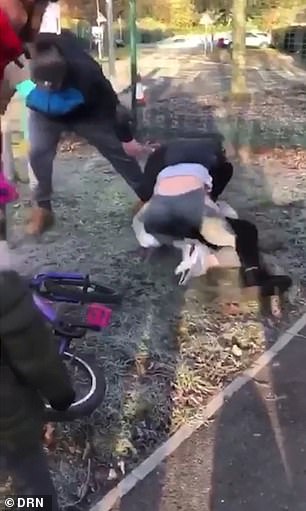 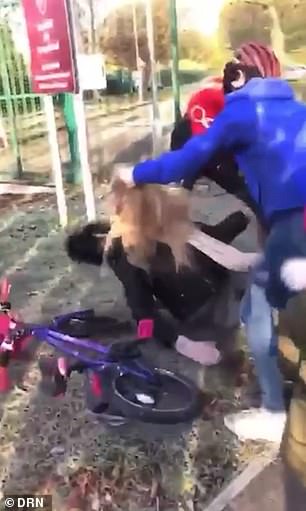 The women suddenly start fighting on the ground and yank each other’s hair (left). One child appears to be knocked off her bike by the brawling pair (right).

It shows the woman with blonde hair repeatedly tell her rival – seen wearing a black coat – to ‘grow up’ but she is told to ‘shut up’.

The second woman points out her rival has a toddler in her arms but she replies: ‘I don’t care. You’ve got kids around ya. Shut your mouth.’ 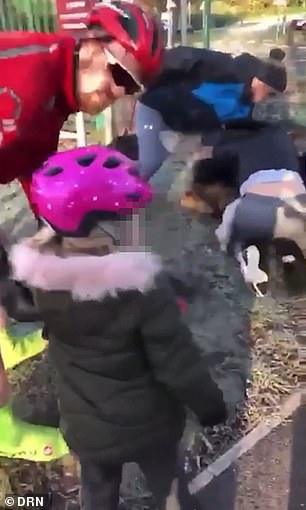 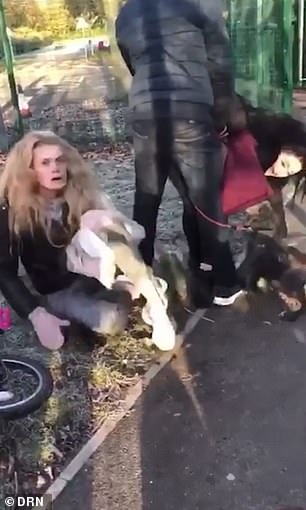 The girl’s father sees it happen and rushes over, shouting: ‘Whoa, whoa, whoa, my child’s there’ (left). Parents separate the pair as children nearby are heard screaming at the scene (right)

She then hands the toddler to somebody else and squares up to the second woman, saying: ‘I ain’t got a kid in my hand now. Go on, I don’t give a f***.’

Her rival points to a pushchair and says ‘my kid’s there’ before the other woman screams: ‘Leave her alone. You’re a bully. So f****** bully me, ya stupid cow, go on.’

The pair then start fighting, pulling at each other’s hair furiously – and as they fall to the ground, they appear to knock a small child off their bicycle. 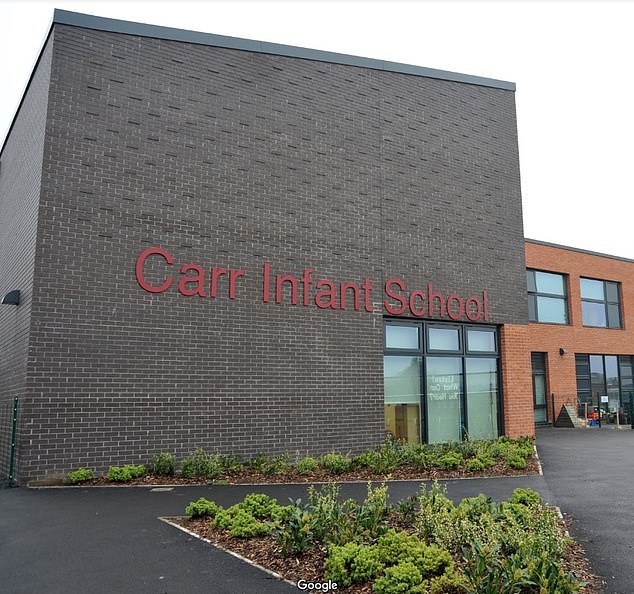 The brawl took place near the entrance of Carr Infant School in York. In a statement on its Facebook page last night a school spokesman said: ‘This incident is serious and the police’ 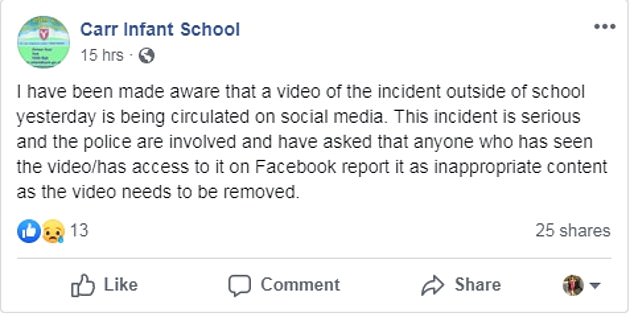 The girl’s father sees it happen and rushes over, shouting: ‘Whoa, whoa, whoa, my child’s there.’

He quickly takes the girl out of harm’s way as the women continue to wrestle on the floor before other parents eventually separate them.

After the fight, the first woman calls her rival a ‘silly b****’ and says ‘leave her alone’ before the footage cuts out.

In a statement on its Facebook page last night, a Carr Infant School spokesman said: ‘This incident is serious and the police are involved and have asked that anyone who has seen the video/has access to it on Facebook report it as inappropriate content as the video needs to be removed.’

A North Yorkshire Police spokeswoman said: ‘Police were called to a report of an incident on Ostman Road, York, on the morning of 19 November.

‘A 23-year-old woman was arrested and subsequently charged with a public order offence.’

The woman is due to appear before magistrates in York on December 12.

Tories reveal '£2,400-a-year Labour tax hit' they claim would be needed to fill £374b 'black hole'
Surgeon insists he did nothing wrong when he wrongly removed a woman's healthy kidney
Mother and ex-boyfriend jailed for 10 years after baby son died from 'horrific' head injury
Prince Harry and Meghan Markle post tricky quiz to 9.4million on their Instagram account
Mother of British teen killed in crash with US diplomat's wife makes plea 'from one mum to another'
Police warn Benedictine monks to 'end campaign of intimidation' against Cotswolds wildlife park
Jeremy Corbyn thanks children for skipping lessons to join Global Climate Strike
Angela Merkel's plane makes emergency landing in Germany