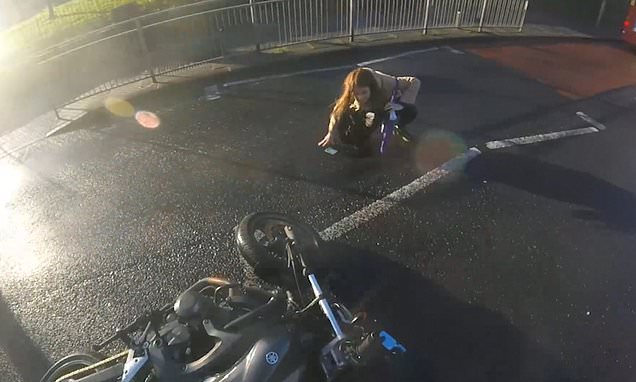 This is the shocking moment a woman was sent hurtling across the tarmac after being struck by a motorbike as she crossed the road.

The pedestrian was hit as she tried to dash across the road in front of traffic to catch a bus – despite the lights being green.

Incredibly, the woman appeared unhurt as she quickly got back to her feet and brushed herself down.

Astonishing dashcam footage shows the biker driving behind a white van on a dual carriageway in London.

As the van goes through the lights, the woman steps out on the road and looks directly at the biker before the impact sends her flying across the tarmac.

After the crash, the biker, in complete disbelief, said: ‘You’re kidding?’ The woman then replied that she had to ‘run for the bus’.

The footage was posted on YouTube by the biker yesterday where it has amassed nearly 40,000 views.

The biker wrote: ‘Bike didn’t suffer much damage other than some bar and engine cover scratches. Lady just hopped on the next bus she could and didn’t give details.’

One user commented: ‘Can’t believe she just fled like that! I thought I heard her say that she’s getting on the bus, but seriously?’

Another said: ‘She didn’t even check if you were ok when it was clearly her fault and you were on the ground.’