Boris Johnson tore into John Bercow this afternoon with a series of jibes as the Commons Speaker oversaw his final Prime Minister’s Questions session.

Mr Bercow is due to step down tomorrow after a decade in the chair and he was on the verge of tears as MPs paid tribute to him while his wife Sally and their three children looked on from the gallery.

But he could not resist delivering some pointed barbs as he noted that the Speaker had been a political ‘player’.

The PM made clear his displeasure at the way in which Mr Bercow had put himself at the centre of the Brexit battle in recent months.

‘As a distinguished former Wimbledon competitor, you have sat up there in your high chair, not just as an umpire ruthlessly adjudicating on the finer points of Parliamentary procedure with your trademark Tony Montana scowl.

‘Pounding every part of the chamber with your own forceful opinions like some tennis ball machine.’ 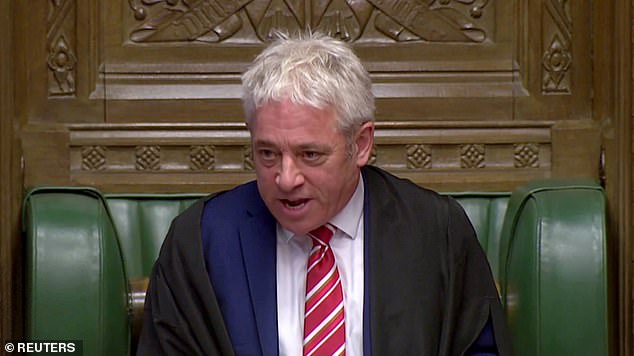 John Bercow was visibly moved as he oversaw his final PMQs as Commons Speaker. He is due to step down tomorrow 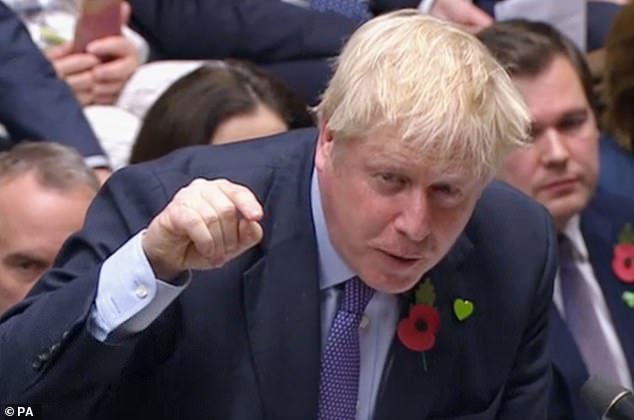 The Prime Minister compared the Commons Speaker to the main character in Scarface and questioned his impartiality today as John Bercow prepares to step down tomorrow.

Mr Johnson said: ‘As befits a distinguished former Wimbledon competitor, you have sat up there in your high chair not just as an umpire ruthlessly adjudicating on the finer points of parliamentary procedure with your trademark Tony Montana scowl.

‘Not just as a commentator offering your own opinions on the rallies you are watching, sometimes acerbic and sometimes kindly, but above all as a player in your own right.

‘Peppering every part of the chamber with your own thoughts and opinions, like some uncontrollable tennis ball machine, delivering a series of literally unplayable, unreturnable volleys and smashes.’

He also took aim at Mr Bercow over his Brexit interventions as he said: ‘Although we may disagree about some of the legislative innovations you have favoured, there is no doubt in my mind that you have been a great servant of this Parliament and of this House of Commons.’

Mr Johnson claimed Mr Bercow had done ‘more than anyone since Stephen Hawking to stretch time in this particular session’ to aid backbench MPs, before joking it was the ‘longest retirement since Frank Sinatra’.

Mr Corbyn said: ‘I want to thank you Mr Speaker for the way that you’ve used your speakership in the decade-long tenure you’ve had.

‘You’ve done so much to reform this House of Commons and our democracy is the stronger for the way that you’ve done it.’

He also joked: ‘You’ve served for ten years, you’ve given real power to backbenchers, vastly expanded the use of urgent questions which has been overwhelmingly popular with all government ministers.

‘And opened up the number of emergency debates, which is even more popular with even more government ministers.’

He said: ‘During your decade, there have been unprecedented attempts really to try to, at times, increase the power of the Executive at the expense of this Parliament.

‘You have been very formidable in maintaining the duty of government to be accountable to this House.

‘I trust your successor will try to live up to your very considerable achievement.’

Mr Bercow said Mr Clarke is ‘one of the most popular and respected politicians in our country’. 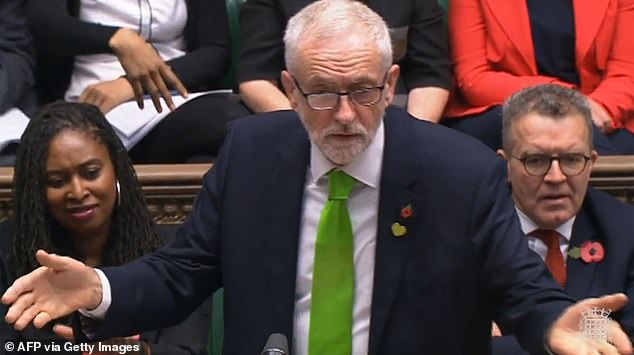 Jeremy Corbyn told Mr Bercow: ‘You’ve done so much to reform this House of Commons’

The Speaker’s voice cracked with emotion as he paid tribute to former staff and his family.

He said his family have displayed ‘support, stoicism and fortitude through thick and thin’ during the last decade.

Mr Bercow said he would ‘never forget it and I’ll always be grateful for it’ as MPs applauded.

Today’s PMQs session was the longest ever as Mr Bercow allowed proceedings to last for 71 minutes.

In September Mr Bercow announced his intention to step down on October 31.

There had been speculation that he could stay on as Commons Speaker after the UK’s departure from the EU was delayed.

But he is due to walk away from the role tomorrow with the election of his successor scheduled to take place on Monday next week before Parliament is dissolved for the December 12 general election.