A multi-millionaire couple who lost a court battle with their architect friend over her free landscaping advice on their £5 million property have been forced to pay £2 million in costs after a judge branded their claims ‘speculative and weak’.

Basia Lejonvarn offered to help then-friends Peter and Lynn Burgess transform the garden of their home in Highgate, north London, with ‘gratuitous’ advice and work on the project in 2013.

But the friends fell out after the couple blamed Ms Lejonvarn, 56, for problems which subsequently blighted the project and massive budget overruns.

They sued her and in 2017 won a Court of Appeal ruling that she owed them a legal ‘duty of care,’ despite her having given her advice and work for nothing.

But in 2018 the High Court dismissed all the couple’s claims after finding that their insistence that Ms Lejonvarn negligently project managed and designed the garden ‘lacked credibility and conviction’. 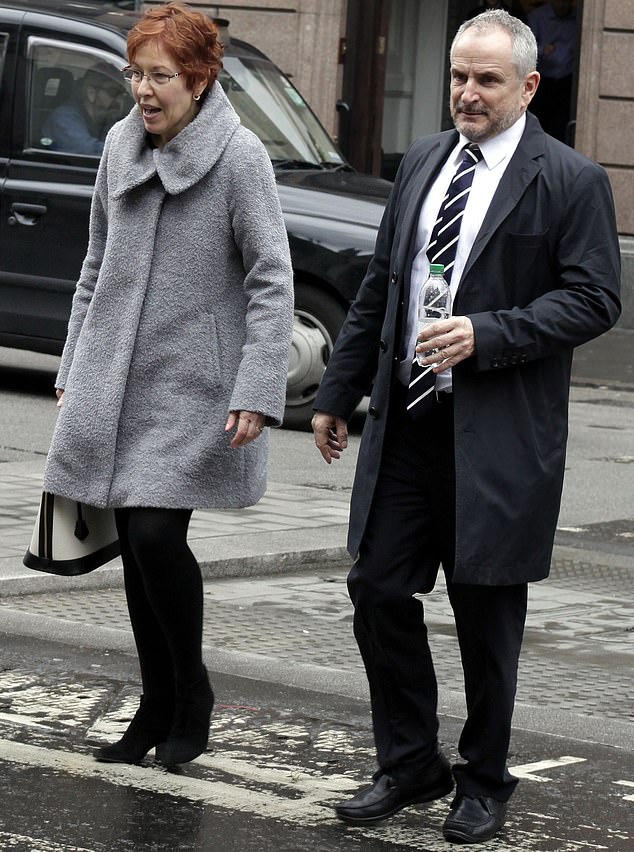 Lynn and Peter Burgess are pictured above. They are set to pay out up to £2 million in costs following the battle

Now Appeal Court judge Lord Justice Coulson has ordered Mr and Mrs Burgess to pay ‘eye watering’ legal costs at a punishing ‘indemnity’ rate, which a source close to the case said would be over £1m and could reach £2m.

The judge said he was making the order because the couple’s claims against their architect friend had been ‘weak and speculative’ and should have been dropped in 2017.

He also lamented the ‘huge costs which had been racked up on both sides’.

A source close to the case said Ms Lejonvarn’s lawyers will be seeking around £1m from the Burgesses.

The total costs bill the Burgesses will be facing is ‘anything between £1.5m and £2m overall’ when their own lawyers’ bills are taken into account, the source said, commenting that spending that amount on lawyers was ‘absurd and grotesque…for a garden that was originally estimated for £200k’. 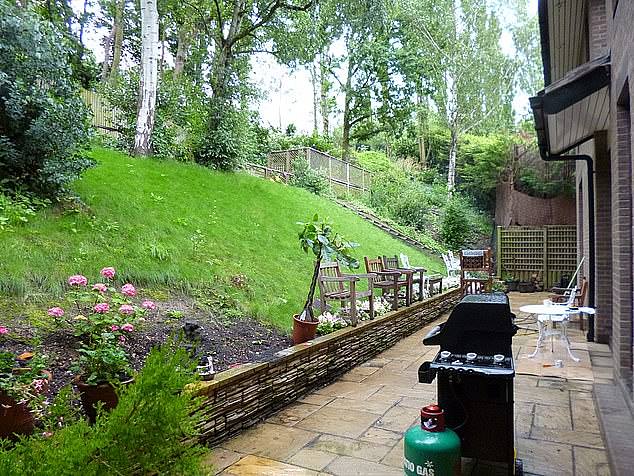 The Burgesses had wanted to get rid of the steep slope in their garden, pictured before the work was carried out 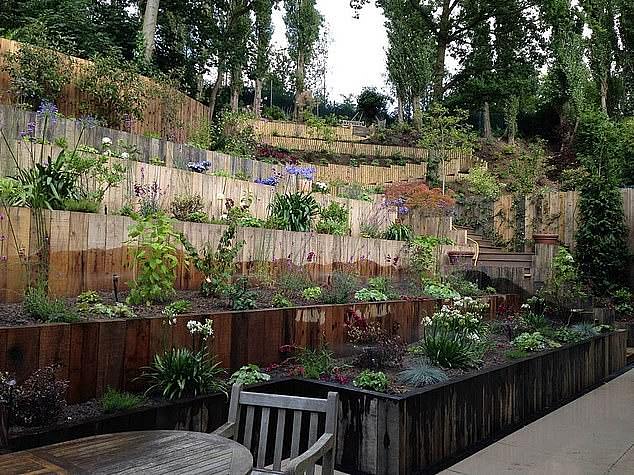 The couple say their terraced garden (pictured after the landscape work) cost £265,000 more than it should have because of Miss Lejonvarn’s intervention

The row between the former friends broke out when the Burgesses decided they wanted to iron out the steep slopes in their garden in 2013.

They wanted restful terraces, paths, lawns and mood-lit flower beds, but weren’t happy with a £150,000 quote from an established landscape gardener.

Mrs Lejonvarn offered to help her friends and Polish contractors were found to carry out the work at a lower price.

But, within months, she and recruitment tycoon Mr Burgess, 62, were engaged in an acrimonious ’email war’. 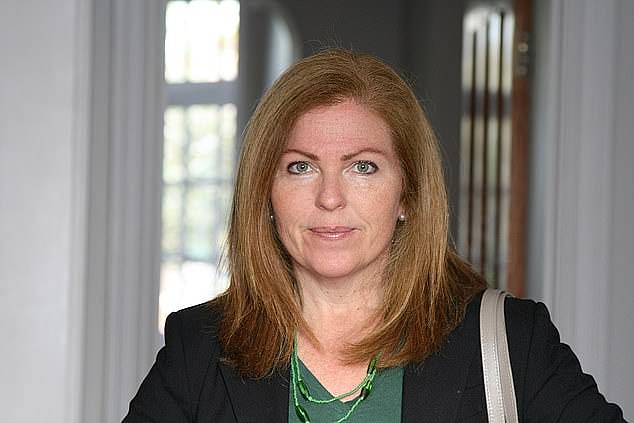 The builders were ordered off the job and the project was eventually completed by the gardener whose quote the couple had earlier rejected.

The Burgesses said the transformation of their garden cost them £265,000 more than it would have done had Mrs Lejonvarn had never been involved.

She protested that she had merely provided free advice to the couple on a friendly basis, in a ‘non-commercial, informal and social context.’

But the Court of Appeal eventually ruled that, as a professional, she ‘assumed responsibility’ for the project and owed the couple a legal duty of care’.

But Mr and Mrs Burgess ultimately came away with nothing after the High Court cleared Mrs Lejonvarn of negligence.

The couple were found to have taken ‘a scattergun approach’ to criticising her performance and Mr Burgess’s evidence was criticised as ‘argumentative and often inconsistent’.

Now ruling on costs, Lord Justice Coulson said: ‘There was a time, 30 or 40 years ago, when construction litigation was a byword for expense and delay, and where costs were often out of all proportion to the sums at stake. 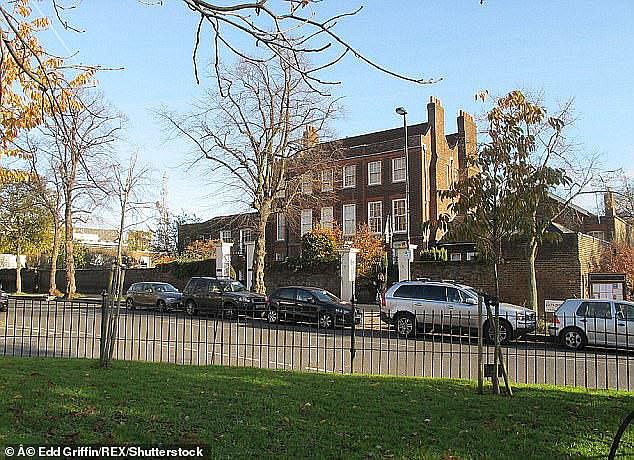 ‘Occasionally circumstances conspire to create a construction case with echoes of the bad old days. Unfortunately this is one such case.’

The judge said that the couple should have dropped their claim years ago and had only fought on due to fear of the crushing costs bill.

‘Mr and Mrs Burgess must have known that after the Court of Appeal judgment their claims were speculative and weak and that all that really mattered now was costs,’ he said.

‘From then on, they found themselves in an absurd position where they were incurring hundreds of thousands of pound on costs, solely in order to try and recover some of those costs from Ms Lejonvarn.

‘They should have called a halt, because their underlying claims were speculative and weak, but they failed to do so.’

He went on to order that the couple must pay Ms Lejonvarn’s legal costs on an indemnity basis from May 2017, meaning her lawyers will not have to prove those costs are ‘reasonable’.

And he said the couple had continued to fight the case partly because of ‘an irrational desire for punishment, unlinked to the merits of the claims themselves.’

‘The decision to continue was borne out of the Burgesses’ desire to punish Ms Lejonvarn for her alleged negligent mistakes rather than seek fair and reasonable compensation for her alleged mistakes,’ he said.

The judge also noted that Ms Lejonvarn had offered to settle the case for £25,000 in March 2015 so that ‘both sides were spared the acrimony stress and expense of litigation,’ but the offer was refused by Mr and Mrs Burgess.

‘Ms Lejonvarn had undertaken some work for people that she regarded as her friends free of charge,’ said the judge.

‘Years, and after many hundreds of thousands of pounds later, all the respondents’ claims failed.

‘Ms Lejonvarn had acted sensibly and proportionately at the outset. The respondents had not.

‘The pursuit of these claims after 7 May 2017 was out of the norm, such as to justify an order for indemnity costs,’ the judge said, in circumstances in which there was ‘the pursuit of speculative and weak claims against the background of an offer that was unreasonably refused and subsequently not beaten’.