An interactive map reveals medieval London‘s meanest streets by detailing the locations and often gruesome methods of more than 140 murders in the city between 1300 and 1340.

The map, based on an analysis of of 14th century scrolls, shows Britain was up to 20 times more violent in medieval times than it is today.

One man was shot with an arrow during a student street brawl, while another was beaten to death for littering with eel skins, the records show.

In the square mile (2.6 square kilometres) of the City of London between 1300 and 1340 there were 142 murders, and researchers discovered that more took place in religious buildings such as churches than in brothels.

Rather than gangs of youths from rival postcodes fighting one another, in the 14th century the records show that medieval guilds often resolved disputes with violence, with many victims dispatched in colourful ways.

A similar row broke out between the Skinners and the Fishmongers guild.

One saddler, John of Vyse, was beheaded with a sword, beaten with a staff and had his leg cut off with an axe.

Death could be a protracted business.

One saddle-maker who had his fingers cut off by a rival died of his wounds – and consequently became a murder victim – a full three weeks later.

Cambridge University criminologist Professor Manuel Eisner plotted all cases of murder from surviving coroners rolls onto a digital map of the city.

The research is a fascinating look into the days, times and favoured methods – and is available online for people researching their family trees.

Assuming a city of 80,000, Professor Eisner suggests that medieval London murder rates were about 15-20 times higher than we would expect to see in a contemporary UK town of equivalent size.

Vicious attack for dropping eel skins outside a shop – August 15, 1326

Roger Styward of Hamptone, was attacked by Simon de Peckham for throwing down eel skins in the Church of St Mary Le Bowe. De Peckham punched Mr Styward in the back of the head, till he fell to the ground and then gave him a kicking.

Alan de Hacford, a priest, became jealous after he found his mistress, Alice de York, sitting with another man.

De Hacford stabbed Mr de Anne to death with a sword known as a misericord, with Alice aiding and abetting, inflicting a mortal wound three inches long ‘reaching to the bowels.’ Alan and Alice fled the scene and were never found.

Professor Eisner said; ‘Following notification of a violent death, the Coroner and Sheriffs would summon a jury from the local area to investigate, then record all the findings.

‘The events described in the Coroners’ Rolls show weapons were never far away, male honour had to be protected, and conflicts easily got out of hand. They give us a detailed picture of how homicide was embedded in the rhythms of urban medieval life.

‘By digitally mapping these murder cases, we hope to create an accessible resource for the public to explore these remarkable records,’ he said. 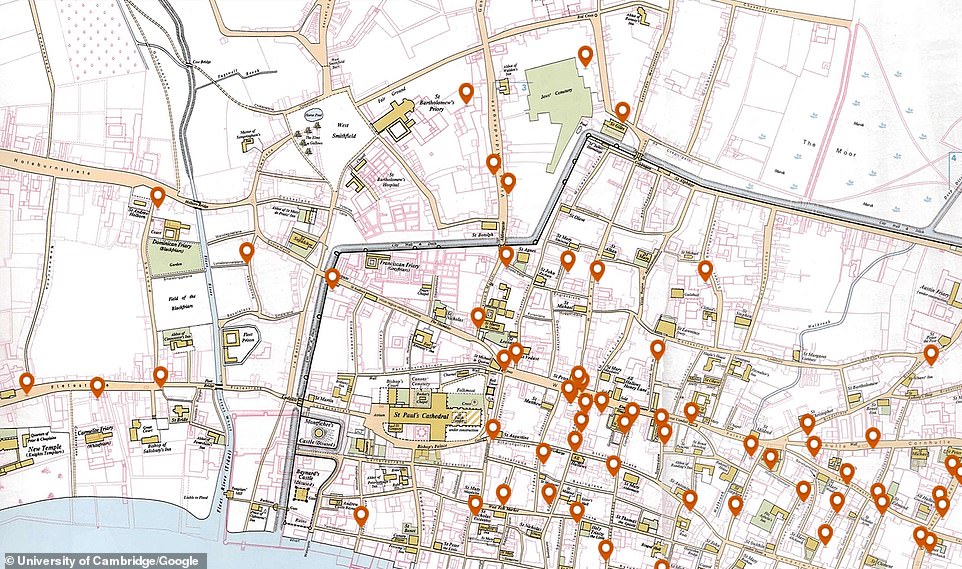 Users can also select two variations of the map, one based on a 1560 Braun and Hogenberg map, and another on 1270 Historic Towns Trust map (pictured)

The two main murder ‘hot spots’ that emerge is the stretch of Cheapside from St Mary le Bow church to St Paul’s Cathedral and the second is the triangle of streets around Gracechurch, Lombard and Cornhill streets, around Leadenhall market.

The research found 68 murders took place in London’s busy streets and markets, with 21 per cent occurring in private residences.

Killing were more common on the weekend – as is also the case now – with a third of murders (31 per cent) taking place on a Sunday. 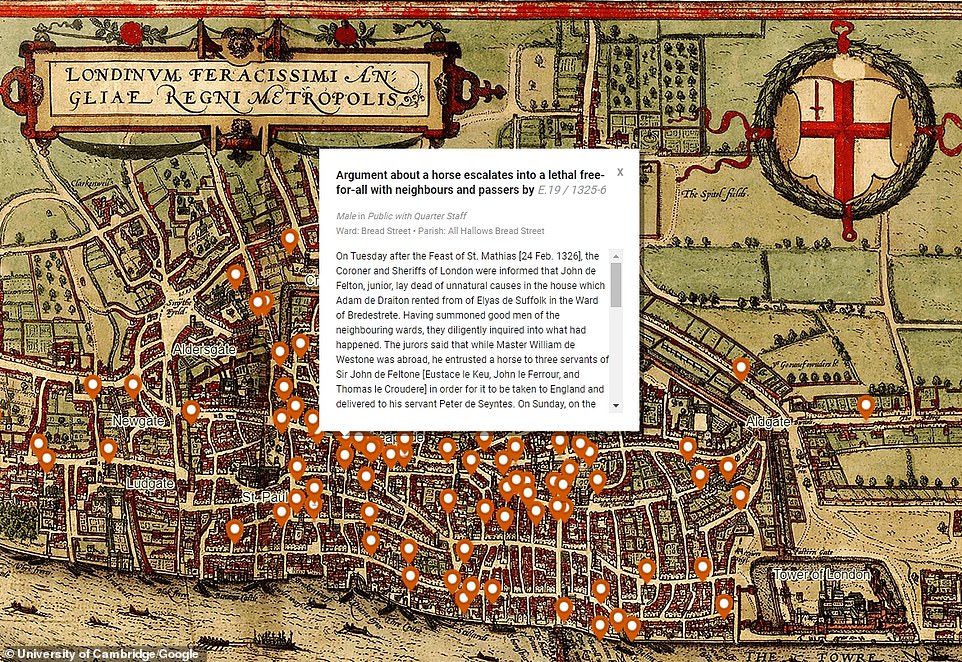 Pictured is a record entry detailing the murder of a man with a quarter staff on Bread Street. Thick ‘quarter staff’ poles designed for close combat were used in 19 per cent of cases plotted on the map

‘Sunday was the day when people had time to engage in social activities, such as drinking and gaming, which would often trigger frictions that led to assault,’ Professor Eisner said.

Around 77 per cent of murders were committed between early evenings, ‘around the hour of vespers, and the first hours after curfew’.

Daggers and swords dominate the list of murder weapons, used in 68 per cent of all cases. Thick ‘quarter staff’ poles designed for close combat were used in 19 per cent of cases.

Around 92 per cent of killers were men. In only four cases, a woman was the only suspect. 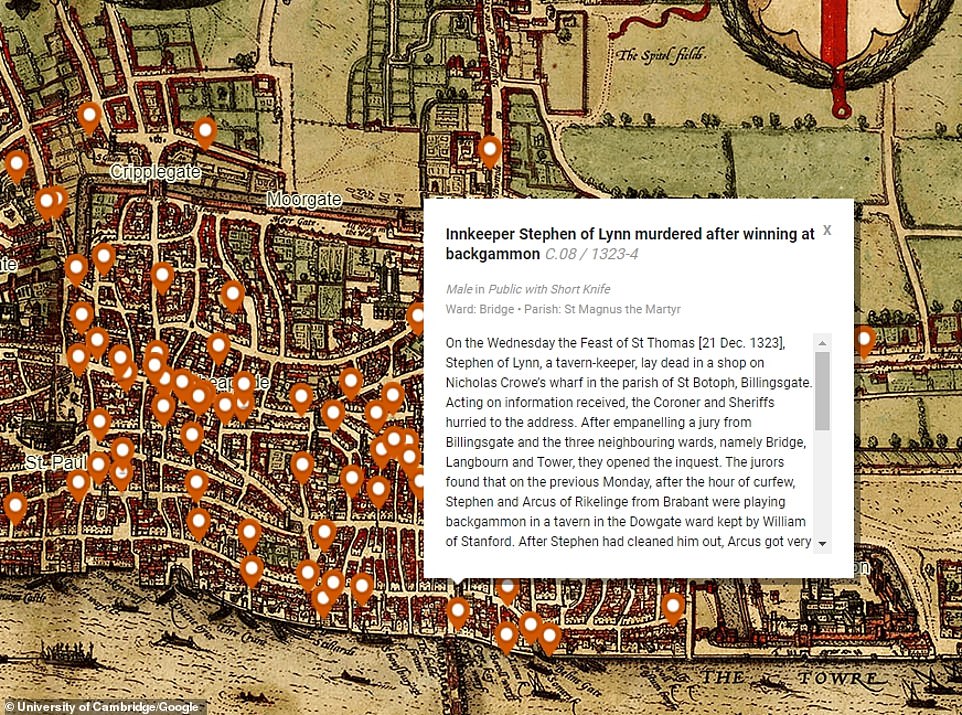 One 1323 entry shows that a man was killed in public using a small knife after winning a game of backgammon. Researchers found that social activities, such as drinking and gaming, would often trigger frictions that led to assault

About a third of the cases had more than one suspect, with a number of murders involving brothers or servants helping masters.

‘We have firearms, but we also have emergency services. It’s easier to kill but easier to save lives,’ he added.

‘Over 18 per cent of victims survived at least a week after the initial trauma, probably dying eventually from infections or blood loss.

‘The trend in London is in line with the long-term decline of homicide found across cities in Western Europe, a decline that led to the pacified spaces that were essential for the rise of urban life and civility in Europe.’

Arsenal stars in carjack terror: Mesut Ozil is attacked by knife-wielding motorbike thugs in London
FBI investigates Jeffrey Epstein's 'madam' Ghislaine Maxwell
Syrian refugee 'waterboarded' by school bullies begged officials to step in WEEKS before attack
Beijing authorities hushed up the findings of a Chinese scientist
The secrets to sprucing up Christmas leftovers that are so tasty you won't waste a scrap!
Strippers who earn $8000 A NIGHT at world's most famous strip club leave viewers shocked
Gwyneth Paltrow reveals new term for a stepmother on her lifestyle website Goop
Broadway star and SNL actress Laurel Griggs died 'from a massive asthma attack' aged 13