But at the age of just 13 she took her own life after studying suicide guides on social media.

On the fifth anniversary of her death, her devastated mum Ruth Moss here speaks publicly for the first time about the tragedy — and says her anger towards the tech companies is still raw.

But Ruth, 47, a research nurse, believes social media giants need to be held to account. She said: “You wouldn’t allow someone to build a school and not protect the children inside. So why should these firms target our kids then do nothing to keep them safe?

“I can’t say the internet caused my daughter’s death, but I do know that social media had become a negative influence in her life.

“It might take time and money to clean up these websites, but what price can you put on a child’s life?

“The more I investigated Sophie’s death, the more shocked I was to discover how easy it is to access these photos and guides.

“I’ve read that Instagram is now blurring self-harm pictures so people can’t see them unless they click a button. But if they can blur them, why can’t they remove them?

Now Ruth and The Sun on Sunday are backing an NSPCC campaign and petition for the Government to get tough on the internet giants.

We are also calling for a FAST-TRACK SYSTEM to make it easier to report concerns about child safety.

Find out how YOU can sign the petition below. 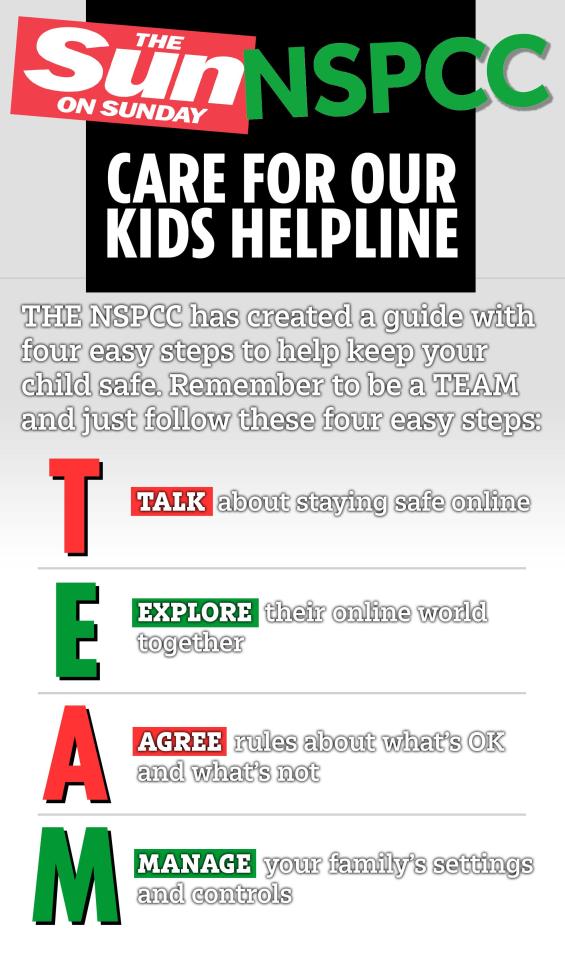 FOLLOW these tips to keep your children safe online.

SET UP PARENTAL CONTROLS: There are so many ways children can access the internet, so set up controls on your broadband – not just one device.

BE SHARE AWARE: Be clear that kids must never share too much. Explain they should avoid user names such as birth dates or locations that give away too much info. Discuss photos and turn off geolocation so other users do not know their whereabouts.

BE NET AWARE: Use the NSPCC and O2’s guide at o2.co.uk/help/nspcc to stay up to date with the social networks kids are using.

Experts say one in 20 kids has had a semi-naked picture sent to them online by an adult.

Andy Burrows, NSPCC associate head of child safety online, said: “Over the past decade social networks have refused to take responsibility for harm on their sites.”

Last month, TV director Ian Russell spoke out about his daughter Molly’s suicide in 2017, saying he believed Instagram — on which Molly had found graphic self-harm pictures — helped kill his daughter.

Dad of three and former Deputy PM  Nick Clegg defended Facebook — which owns Instagram — saying: “Some of these distressing images are better kept up if it helps young people reach out for help.”

His comments angered Ruth. She said: “What Nick Clegg said is dangerous and it is misleading.

“To say looking at these horrific images could have benefited my daughter flies in the face of all the available evidence. He should be ashamed of himself.”

Ruth’s daughter was depressed and took her life after studying suicide guides she is thought to have found on Google and social networks Tumblr and Facebook.

Ruth, from Edinburgh, said: “Sophie was always a sensitive little girl who would cry when she watched Pet Rescue.

“She had been through a lot of changes in the two years before she died, including her father and I getting divorced.

“The first time I realised she was looking at these images was when we found some on her iPhone. She was taking pictures of her cut arms and posting them.

“She had also accessed images of people hanging themselves. I took away her iPhone and gave her a basic one with no internet.

“But she still had an iPad as she needed one for school and she was going to cafes with free wifi to access the internet.”

Ruth, who has remarried and has a 21-year-old son at university, added: “We are devastated and you constantly ask if there is any more you could have done. I did everything I could to protect my daughter and monitor her internet usage, but there is only so much you can do.

“We need more help from the Government and from these social media executives, many of whom are parents. This is a big issue and it is not going to go away.”

A Facebook spokesman said: “We do not allow content that promotes or encourages suicide or self-injury, and we will remove it as soon as we are aware. 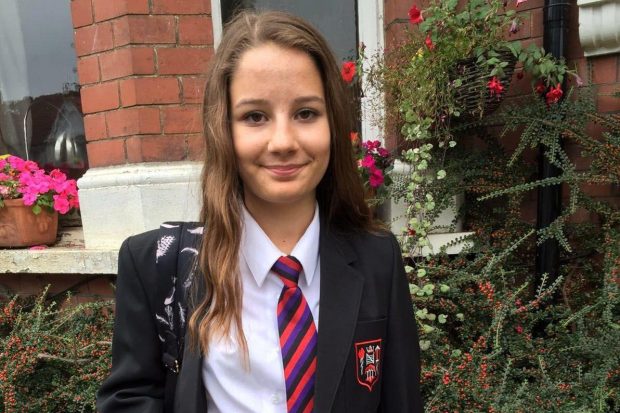 The tragic death of Molly Russell has shone a spotlight on the dark underbelly of social media platforms.

Whilst social media can be a tremendous force for good, distasteful, disturbing and abusive content is now bombarding our children, and other vulnerable users on a regular basis. Some of it illegal.

Enough is enough. 2019 will be the year we take a stand against the cyberbullying, the glorifying of self harm and suicide, the vile hate crimes and worse. We want and support trusted technology that helps and heals, not harms.

Nearly 8 in 10 UK adult internet users have concerns about going online and over half believe more regulation is needed on social media.

So this year we’ll set out new laws to make the UK a safer place to be online. That means putting more responsibilities on social media companies to remove illegal content. And doing more to keep people secure online.

Because at the moment, there’s a huge difference between the real and the virtual worlds.

Offline, there are strict rules to prevent children viewing pornography. But pornographic websites are easily accessible for free with little effort to stop children and young teenagers seeing them.

That’s why we’ll be leading the world this year by making it illegal for pornographic websites to allow people to access them without proving they’re over 18.

But with the explosion in the number of online services, children are still being exposed to content that’s not right for their ages.

Parents deserve peace of mind that their children won’t come across something disturbing.

I’m joining the Sun on Sunday’s call for more action from companies that have an online presence. They need to ensure the services they offer are age-appropriate.”

A Facebook spokesperson said: “Our hearts go out to the family affected by this tragedy and to everyone dealing with the difficult issues raised this past week.

“We have a deep responsibility to make sure people on Instagram and Facebook are safe. We do not allow content that promotes or encourages suicide or self-injury, and will we remove it as soon as we are aware.

“Mental health and self-harm are complex and nuanced issues, and we work with expert groups who advise us on our approach.

“They tell us that the sharing of a person’s mental health struggle can be an important part of recovery. This is why we don’t remove certain content and instead offer people looking at, or posting it, support messaging that directs them to groups that can help.

“We want to be sure we’re getting this right and we have started a full review of our policies, enforcement and technologies around suicide and self-injury content.

“Whilst we conduct this review, over the past week we have had a team of engineers working round the clock to make changes to make it harder for people to search for and find self-harm content.”

“We work with expert groups who tell us that the sharing of a person’s mental health struggle can be an important part of recovery.

“This is why we don’t remove certain content and instead direct them to groups that can help. We have started a full review of our policies and are working round the clock to make it harder for people to find self-harm content.”

Steve McClaren deserves to be axed by QPR after ‘taking my job’, says Ian Holloway
Mourinho, Keane and Souness tell Rashford he’s not a No9 after another blank in Man Utd’s defeat to ...
Brighton vs Manchester United LIVE SCORE: Latest updates from the Premier League clash
Man Utd and Spurs target Bruno Fernandes’ Real Madrid transfer ‘to be announced tomorrow’
Fortnite players are quitting and even SELLING their accounts thanks to new Call of Duty Black Ops 4
9am Chelsea transfer news LIVE: Higuain gets first goal in Huddersfield win, Courtois wants Hazard a...
As students study emojis at university, test how well you know the icons by decoding these famous mo...
Kate Middleton loves a curry night while Meghan Markle ‘could eat chips all day’: The Royal guilty p...