Karl Lagerfeld’s death has torn me in two. My rational side is relieved he’s out of pain — Karl had pancreatic cancer — but my emotional side cannot stand the idea that we’ll never speak again.

As all of Karl’s obituaries attest, he was exceptional on so many fronts, not just fashion. Few, however, mention how protective and kind he was.

I know this as I began my career in Paris with Karl. In November 1989, aged 26, I became one of his assistants at the Chanel Studio. U.S. Vogue’s Anna Wintour had introduced us.

I’d been working in New York at Andy Warhol’s Interview magazine, and Anna had wanted to hire me at Vogue, but my sights were set on Paris.

Karl’s extraordinary work ethic reminded me of the legendary artist. Both fired on every cylinder. Andy used to say, ‘I’ve got to keep the lights on’, whereas Karl liked to tease, ‘I am working class’. They were often compared. 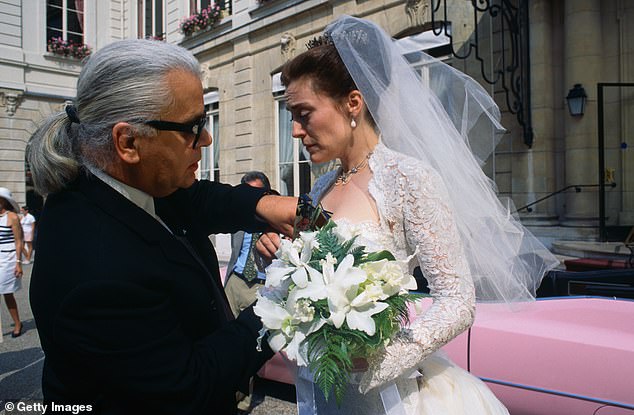 Nevertheless, Karl firmly dismissed the idea he was an artist. ‘I am a fashion designer who makes clothes,’ he frequently stated. ‘I am not an artist.’

During my 18 months with Karl, I gleaned that fashion was not necessarily about the chic little black dress and conventional good taste.

It was about avoiding nostalgia and breaking boundaries. To remain relevant and make its mark every season, Chanel had to shock, seize and astound, otherwise, to quote Karl, ‘what’s the point?’

Karl’s modern attitude explained why his reputation exploded globally with the rise of social media — ever ready with the quips, the images and jokes, whatever he did was news.

Despite his imposing, recognisable public persona — the white ponytail, high collar and sombre suit — Karl had a sweet and touching private side.

Think exuberant hand-written letters thanking you for a present (out-of-print books worked a treat), faxed over in the middle of the night, or exquisite arrangements of roses ordered from Lachaume, the top Parisian florist.

He was incredibly loyal to women of every generation in the fashion world — when Karl picked you for his team, he was never far away. 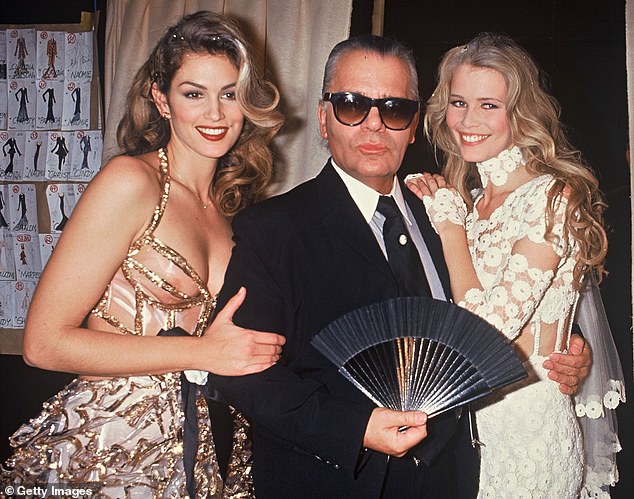 When I said I’d been sacked, he responded: ‘Who cares, and who are those people, anyway?’ Actually, they were pretty important! Still, it was characteristic Karl — gloriously imperious and what I needed to hear at the time.

He nursed a passion for English women. Naturally, this made me proud. He often referred to the British spontaneity, wit and originality. His war cry was ‘fashion has to be fun’. And, in his experience, the Brits he worked with were precisely that: fun.

The range included singer Lily Allen, models Cara Delevingne, Kate Moss and Stella Tennant, stylist Charlotte Stockdale, and Lady Amanda Harlech, who was never far from his side from 1996.

Nevertheless, when I arrived at the Chanel Studio in 1989, no one really spoke English apart from Karl and Gilles Dufour, his right-hand man. Indeed, as my French was utter rubbish, I relied on Gilles’s translation and patience.

Occasionally, it proved embarrassing, such as when Alain Wertheimer, Chanel’s co-owner, called to speak to Karl. ‘Sorry, who is it?’ I asked. ‘Alain Wertheimer.’ When I asked him to repeat and spell his name, the telephone was grabbed from my hand. 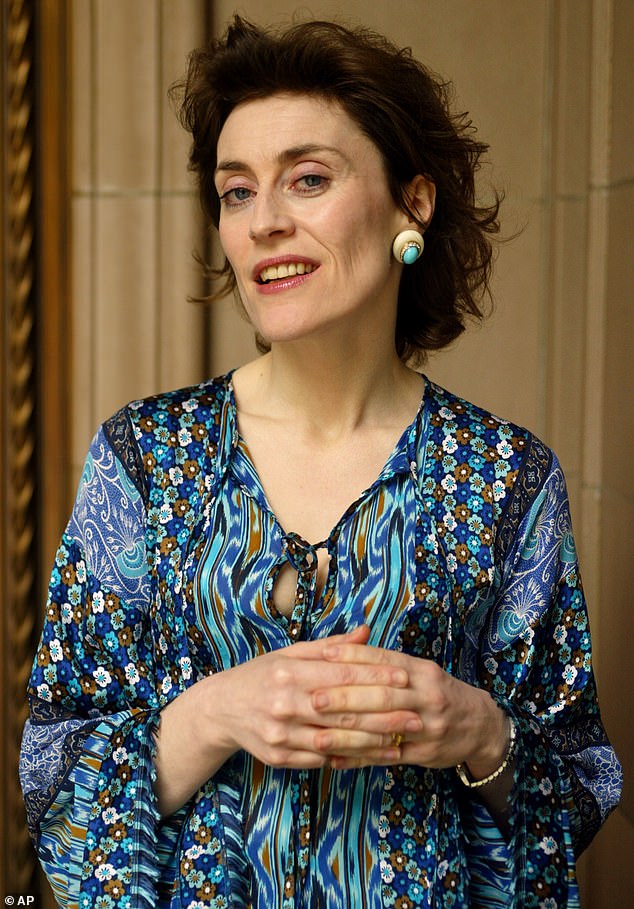 Nor did I resemble a fashionista when I arrived. ‘Karl Lagerfeld is never going to hire you,’ an ex-boyfriend had spluttered, prior to my employment. On my first day, I looked like a convent schoolgirl. I teamed a black and white embroidered Kenzo blouse with a black satin Jasper Conran skirt and over-bulky red V-neck Burberry cardigan.

Despite the labels, I defined ‘inappropriately dressed’ — particularly when faced with all the other women of Karl’s studio, who defined cool.

It’s hard to describe the level of confidence they exuded — in the summer months, a junior in Chanel’s press department wore just a swimming suit to work.

Only Virginie Viard, then in charge of hats and gloves, had attended fashion school. All the others were from ‘nice’ families who knew either Gilles or Karl, apart from Victoire de Castellane, an aristocratic It girl.

When Karl arrived at Chanel’s flagship building on the Rue Cambon, the receptionist would phone to warn us he was on his way up, prompting everyone to apply fresh lipstick and slip on heels.

Usually Karl would come in twice a week, but if it was just before a show, he would arrive every day and be kept busy with model fittings and picking accessories. 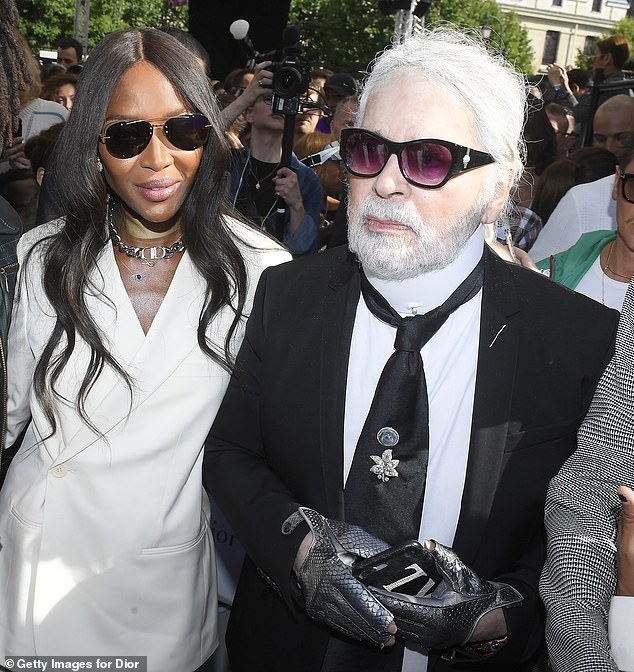 On one occasion while working for Karl, Natasha was tasked with playing bodyguard to Naomi Campbell (pictured with Karl at Paris Fashion Week 2018)

After my first season, I was responsible for the signature Chanel camellias and worked with Madame Jeanne at Maison Lemarié, the specialist in feathers and flower arrangements. Once I ordered 180 pale green taffeta camellias for a dress that matched Linda Evangelista’s eyes… but never saw the light of day.

The studio — our office — was one big Thirties-style room which had a pair of French windows that opened out onto the Rue Cambon. Minimal and elegant, the egg-shell coloured walls were decorated with Karl’s framed black and white photographs, as well as a large painted portrait of Gabrielle Chanel, the house’s founder.

Karl’s broad desk was the largest piece of furniture, piled with books and the latest magazines.

Most days, we gathered around the board covered with photocopies of Karl’s sketches for that season’s collection. I was fascinated by their intricate detail and amused that he used Chanel make-up for certain colours.

We all had official roles, but when models arrived, anything went. Once, I was tasked with playing bodyguard to Naomi Campbell when she had a couture fitting opposite in the Ritz. She was convinced Sylvester Stallone was after her, even if he never materialised. I was a bit disappointed!

Although there was a considerable respect for Karl, it was recognised that he liked to laugh and joke, and that created a relaxed working atmosphere. 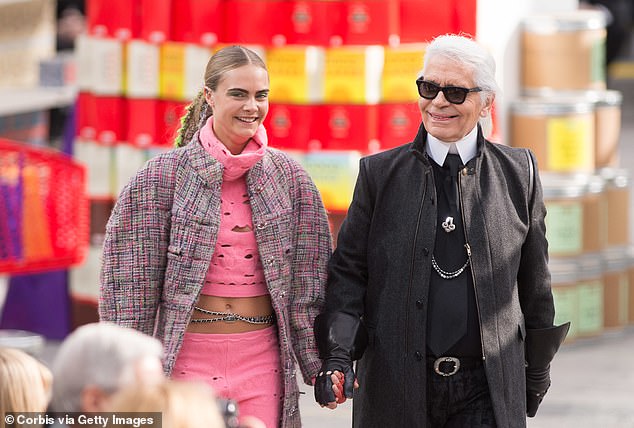 This led to all sorts of pranks, such as Gilles telephoning the Danish supermodel Karen Mulder to insist all blonde models had to dye their hair black that season.

Karl was also amused by my endless conversations to my friends in London.

Later he said: ‘You spent your life on the telephone.’ Incredible to admit, but before my French improved and I felt more at home in Paris, I really did.

Karl would be sizing up house models wearing a work-in-progress jacket or dress and I would be yacking up a storm. Occasionally, I looked up and caught Karl’s glance. There was more than a hint of warmth, otherwise I would have hung up. Instead, I’d smile back — my face had dimples then — and return to the gossip.

According to Gilles, I reminded Karl of a ‘belle epoque actress’ as I was always ‘in a good mood’.

Creatively, Karl was generous. At Gilles’s insistence, I had shown him a jewellery collection and scarf fabrics I had designed.

Karl focused on one of my fabric designs. The pattern was of a teapot pouring out jewels. He took a large piece of paper and a pen, made a few quick changes, then handed it to Gilles. ‘We’ll add some double Cs and use it for pret-a-porter,’ Karl said.

The following ready-to-wear season, my teapots were splashed across black satin silk. The fabric was used for Chanel blouses and jacket linings. 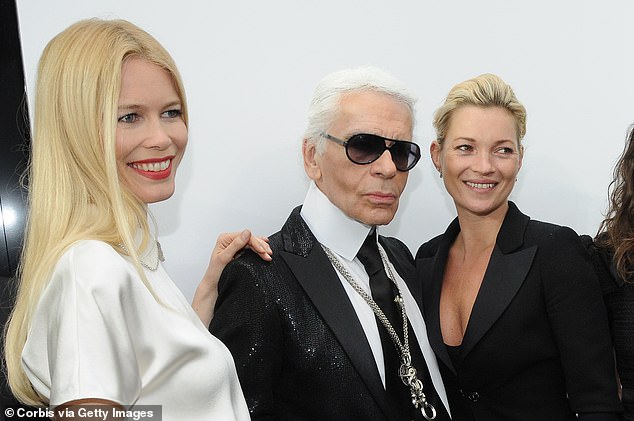 Before I left in May 1991, I would end up designing two more fabrics — one consisting of double-C playing cards and pearl drops, which I described as ‘tears spent at the gambling table’; the other covered with jewelled feathers and flying Chanel clocks. Karl used both and made sure I got the credit — unusual for the fashion world.

The only problem was my weight. Like Karl during that period, I waxed and waned. A typical day began with a creme (the French equivalent of a latte) and several croissants. My idea of cutting back meant refraining from tea and biscuits, but chowing down at lunch and dinner.

When Karl used to arrive with boxes of Mont Blanc and other delicious cream cakes from Angelina, the famous patisserie, I dug in while others held back.

Oddly enough, it didn’t matter to Karl. A complexion snob, he was taken by my porcelain skin, describing it as ‘flawless’.

Alas, it all came to a head when Karl decided to take my portrait. I was presented with a clothes rack of ten black Chanel jackets to choose from. As I tried on each one, it became clear I could barely squeeze my plump forearm into a sleeve. Hastily, the clothes were abandoned. I was artfully wrapped in black taffeta.

Karl and Virginie Viard — by then, the studio’s stylist on hand, who is now Chanel’s new creative director — achieved miracles using costume jewellery and opera-length gloves. Like Karl, Virginie had incredible precision and an eagle eye for detail. Even from a distance, she noticed the teeniest missing button. 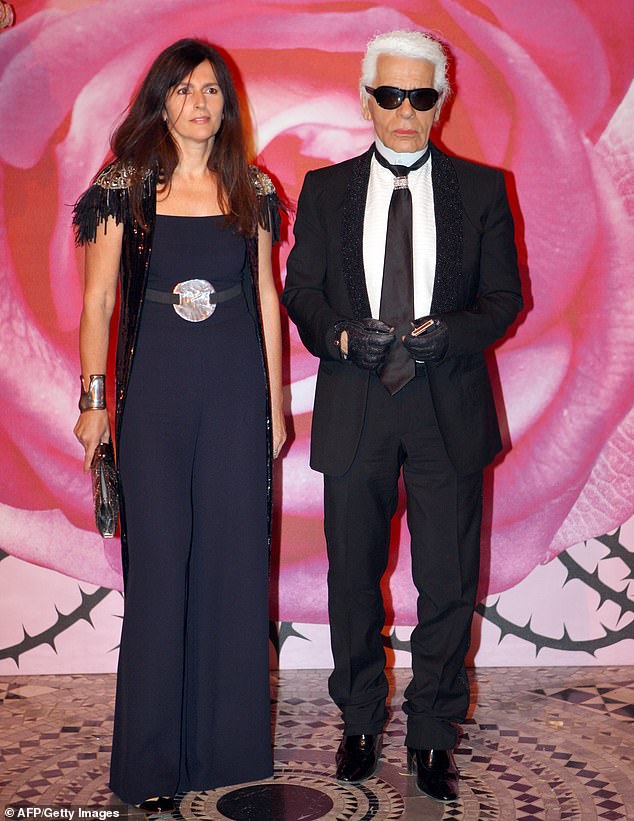 While not an advocate of wearing one label from top to toe, Karl liked it when the Karlettes — as we were nicknamed by industry bible Women’s Wear Daily — wore his designs, especially when teamed with young, hip designers.

He was delighted when I wore his pink satin camellia hat to the Prix de Diane horse race at Chantilly, and chuffed when I wore a black taffeta jacket from his Karl Lagerfeld line.

On the other hand, he was appalled when I dyed my hair red — ‘Natasha, you look like the madame of a 19th-century brothel’ — arguing it was an insult to my colouring.

The situation worsened when I hit the Californian sun, which turned my hair orange. As soon as I returned to Paris, I went natural forever more.

At the time, he lived in a beautiful 18th-century apartment where he hosted candlelit dinners as well as parties. I remember accompanying designer Tom Ford — then Gucci’s golden boy — to a soiree given for Donatella Versace. Tom was just as excited as I was.

Although Karl’s name was linked to a certain amount of drama in the Press, I only recall a loss of temper when Claudia Schiffer didn’t come to the Haute Couture show. 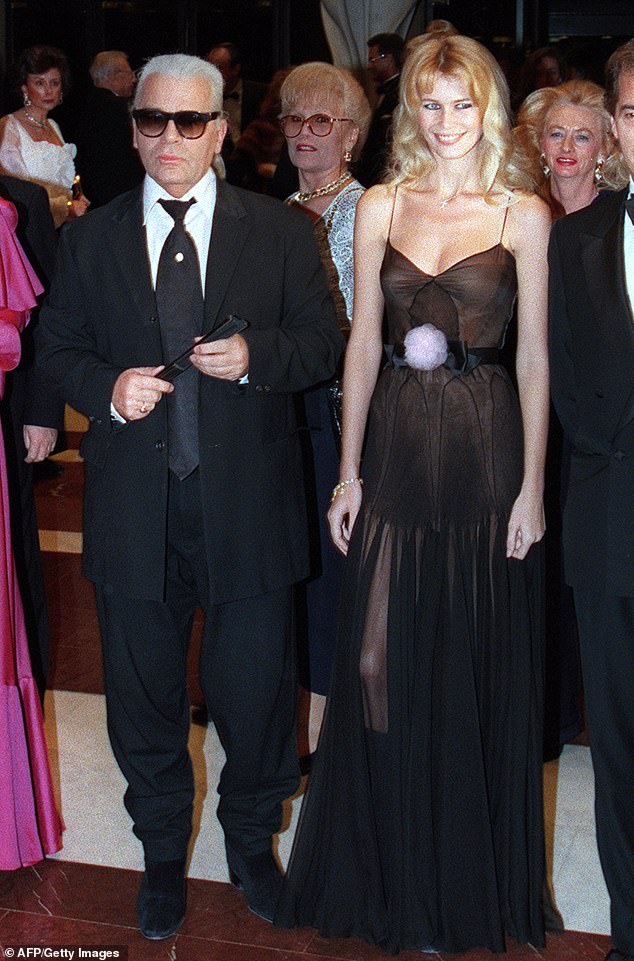 It was January 1991 and the Gulf War had just broken out. The news that the German supermodel was scared of flying made his cheeks shake with rage. Several seasons later, they made up.

Karl was also furious about Alicia Drake’s 2006 book The Beautiful Fall, which described his rivalry with the designer Yves Saint Laurent. It exposed details including his real age — he had knocked five years off.

He berated me for being interviewed by Alicia, a dear friend. Since our relationship was based on honesty, I said: ‘Karl, I come from a family of writers, and when we like and respect someone, we know how important it is to talk them up in a book.’ He understood and forgave me.

It was my only tricky moment with Karl, with whom I stayed in touch when I joined Women’s Wear Daily, then became Harper’s Bazaar’s European Editor in 1999.

I will always associate him with the merriest of memories, such as flying with him and his Chanel team to see the Christmas decorations at Hamburg. On arrival, he greeted each of us with a different gingerbread house.

I treasure the 18th-century diamond brooch Karl gave to me at my wedding — a typical gesture of kindness. It attracts endless compliments, but most of all it’s a gift that reflects its giver — brilliant, extravagant, and utterly unique.

After Andy: Adventures In Warhol Land by Natasha Fraser-Cavassoni (Blue Rider, £23.99) is out now.