The Netherlands’ prime minister has dealt a blow to Boris Johnson‘s Brexit plan as he said the EU will not accept any customs border in Ireland. 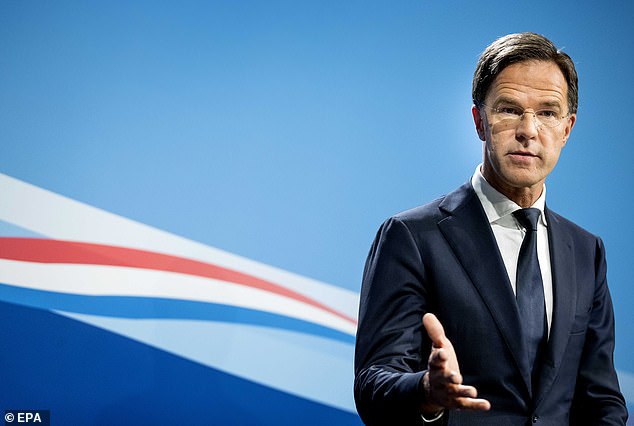 It comes after Brussels declined Mr Johnson’s request for negotiations to continue over the weekend.

Now diplomats believe any chance of a Brexit deal before October 31 has been scuppered – with an extension the most likely outcome.

Relations were already at a low after Britain’s main negotiator David Frost told the EU yesterday Britain would not make any ‘fundamental changes unless we are in a give-and-take relationship,’ an EU official told the FT.

The EU said Mr Johnson’s plans to avoid a hard border on the island of Ireland and replace the backstop need to change.

The proposal for a 14-month transition period for customs checks on the island is not acceptable, Brussels said.

Mr Frost said the UK needed to limit the role of the European Court of Justice in pushing through a post-Brexit deal, ditch EU state aid rules for Northern Ireland and called for access to EU goods databases even after Brexit.

But Brussels rejected all of these.

An EU diplomat said: ‘We are not in a position to engage with these demands.’

Mr Johnson will try again on Monday as he returns to Brussels, but faces an uphill battle as officials said the EU would not enter intensive ‘tunnel’ negotiations before the October summit.

A British official said: ‘We want a deal and talks continue on Monday on the basis of our offer.’