In yet another blow for the Prime Minister, Boris Johnson has urged Theresa May to postpone the Brexit deal vote.

Mr Johnson last night urged MPs to vote down Mrs May’s deal for a third time if it is put to a vote this week.

But the under-pressure PM, also received a string of major endorsements that will give her fresh hope the deal could pass within days.

Mr Johnson warned in his Daily Telegraph column that it gives the EU an ‘indefinite means of blackmail’ against the UK.

In a direct attack on Mrs May, he paints her and her team as collaborators in the ‘final sabotage of Brexit’ just 11 days before Britain is due to leave the EU.

The former foreign secretary urged her to postpone the vote and use a forthcoming EU summit to seek ‘real change’ on the Irish backstop.

Mr Johnson said: ‘It would be absurd to hold the vote before that has even been attempted.’ 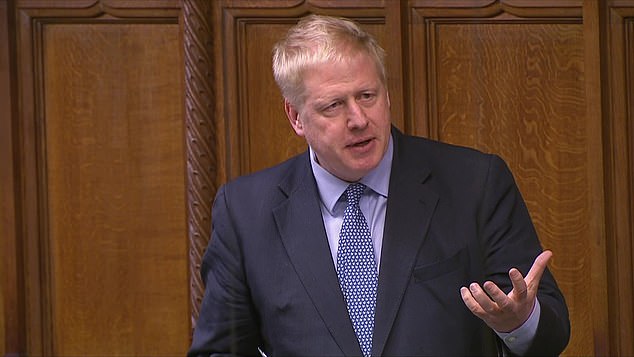 He added: ‘Every single important issue is still up for negotiation; and whether by accident or design, the UK will enter the second phase of the talks – if this deal goes through – in a position of almost unbearable weakness.’

But in a significant boost for the PM, former Chancellor Norman Lamont urged his fellow Brexiteers to focus on the ‘prize’ of leaving the EU – and back the deal.

Writing on the page opposite, the Eurosceptic grandee warns wavering MPs that ‘history will not understand if it is Conservative MPs who prevent us claiming our self-government’. Mrs May is hoping to build momentum behind her deal today with an agreement with the DUP that could bring dozens of Eurosceptics on board.

The Nobel Peace Prize winner praised Mrs May for securing ‘substantive’ concessions on the backstop, adding: ‘The chances of the PM getting the deal through Parliament have improved.’ Former Vote Leave chief Matthew Elliot also came out for the deal, warning Euroscptic MPs: ‘It’s May’s deal or nothing.’ 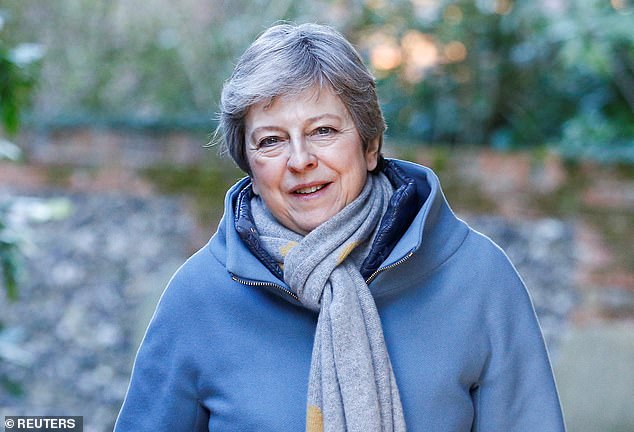 Theresa May, pictured yesterday arriving at church in Sonning, received a string of major endorsements for her Brexit deal last night that gave fresh hope it could pass within days

But, with the trickle of Eurosceptic MPs declaring their support still failing to turn into a flood, the prospects for the deal remain on a knife edge.

Mrs May was last night still deciding whether or not to press ahead with tomorrow’s planned vote on her Brexit deal. Philip Hammond and Liam Fox both said it could be pulled if it looked like it would be defeated a third time.

But Chancellor Hammond claimed ‘significant’ numbers of Tory MPs who opposed the deal were now considering changing their minds.

Downing Street was braced for Boris Johnson to ‘double down’ on his opposition. And Tory sources said fellow leadership hopeful Dominic Raab was also indicating he would help Labour vote down the deal for a third time.

Some senior figures believe tomorrow’s vote should be delayed until next week, by which time Mrs May is expected to have requested an extension of Article 50. One Cabinet minister urged the PM to delay, adding: ‘Whenever it comes it is going to be incredibly tight. I think the DUP will come across but we also need Boris and Raab and Rees-Mogg to have a chance. Even then, we will need some more Labour MPs to come on board.’ At the start of a crunch week on Brexit:

Ministers believe they are close to sealing an agreement with her DUP backers, which could see dozens of Eurosceptic Tories reluctantly fall into line behind the deal. Mr Hammond yesterday indicated the DUP could be handed more cash for Northern Ireland if they agree to back the PM’s deal.

He told the BBC’s Andrew Marr show: ‘This isn’t about money. It’s about a political assurance – well, look, we are coming up to a spending review and we will have to look at all budgets, including devolved block-grant budgets.’

Gordon Henderson, a Tory MP who has voted against the deal twice, told the Mail: ‘If the Government can find a formula that satisfies our DUP colleagues, then it will satisfy me.’ Ministers were helped last night by Lord Trimble’s decision to drop his opposition to the backstop plans in the light of fresh legal assurances that it could only be temporary.

In a paper for the Policy Exchange think-tank, he said: ‘The Government has succeeded in securing substantive changes that will affect and limit the impact of the Irish backstop’. The intervention from Lord Lamont, a patron of the hardline Leave Means Leave organisation, could also prove significant. 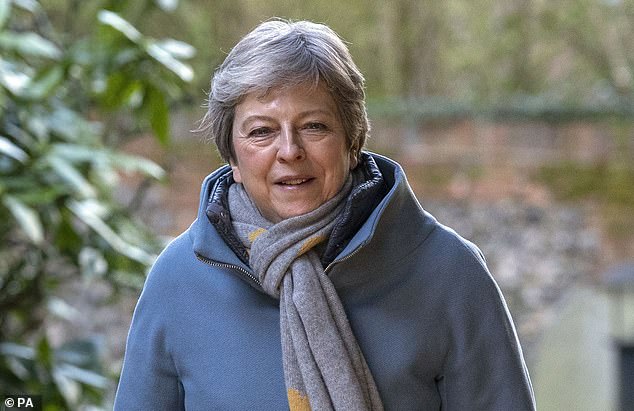 The former Chancellor, who served in the Thatcher government, warns fellow Eurosceptics that Brexit could be lost altogether unless they stop their infighting and back the PM.

He said it was ‘wishful thinking’ to believe that Parliament wouldn’t try to stop Brexit once it had been delayed. And he said there would be ‘all to play for’ in the second round of talks with Brussels, as long as the withdrawal deal was passed. He added: ‘To assert as some Eurosceptics do that it is preferable to remain in the EU than to accept Mrs May’s deal is absurd. The PM’s deal is far from ideal. But it has one overwhelming advantage. Under her deal we will definitely leave.’

Tory MP Daniel Kawczynski, a member of the European Research Group of Eurosceptic MPs, said: ‘The mood is changing. People are getting tired of the infighting at Westminster and in the Conservative Party. They expect us to get this across the line.’

Emma Lewell-Buck, who resigned from Labour’s front bench last week to vote against a second referendum, said she and other like-minded MPs wanted to see Brexit delivered with the current deal.

But some Tory hardliners suggested they would never back down. Andrea Jenkyns, a prominent member of the ERG, said: ‘The British spirit is to fight on and not to back down to threats.’

McVey eyes up No 10 as she tells May: Step down or you’ll lose vote

Mrs May will have to promise to make a ‘dignified departure’ from Downing Street to get her deal through, a former Cabinet minister said last night.

In a blunt intervention, the former work and pensions secretary Esther McVey became the most senior figure so far to warn that the price of winning Eurosceptic support for the Prime Minister’s deal might be her resignation.

Miss McVey, who indicated she will run for the Tory leadership when Mrs May steps down, said the ‘feeble negotiators’ who delivered the deal must not be allowed to oversee the next round of negotiations.

Miss McVey resigned from the Cabinet last year over the deal, but has now said she will vote for it. She told Sky News that Mrs May ‘will have to decide what to do’, adding: ‘What people will be asking for is for those feeble negotiators to go because they cannot take us forward to the next stage.’

She praised the Prime Minister’s ‘dedication’ but, when asked if she should resign, she added: ‘I think that what is best for her is, really only she knows. But what I do know is we as a party want to be able to thank her. She needs a dignified departure, so however that works best for her.’

And she made it clear she was ready to throw her hat into the ring when Mrs May indicates she is stepping down. Asked if she would stand, she said: ‘If there were enough people who supported me. If it seemed there was a reasonable chance, I would.’

Meanwhile, Tory MP Charlie Elphicke warned explicitly that his support for the deal depended on ‘a change of leadership’.

Mr Elphicke, a member of the hardline European Research Group, said: ‘What I am clear on is that if we are going to support it, there needs to be a change of negotiating team for the future relationship because there’s no way to be carrying on with Parliament. So I think for me we need to have a change of leadership, and a new face and a new team to take us forward.’

Asked if his vote was ‘up for grabs’, Mr Elphicke told the BBC: ‘I’m listening carefully, considering carefully about the balance of things. I’m also interested in what the Prime Minister says about how we’re going to take forward the negotiation… so the problems in the withdrawal agreement are not replicated when we actually come to do the future relationship with the EU.’

Mrs May’s former policy chief George Freeman last week called for her to set out a timetable for her departure in the summer. And several Tory MPs have told the Daily Mail privately that a resignation promise could be a ‘game changer’.

One ERG source said: ‘If she doesn’t commit to go then they will not get the votes they need. It is not enough for the whips to hint that she might quit – people need to hear it, in public, from her own mouth.’

Tory MP Andrew Bridgen yesterday said: ‘I’ve been approached by whips offering the PM’s resignation if I vote for her deal.’ But Government sources denied the claim.

One of Europe's first civilisations the Minoans were NOT 'wiped out' by a natural disaster
New IRA in frame for letter bomb plot amid fears dissident terror groups will exploit Brexit
Airlines turn BACK from Iranian airspace after West said Tehran DID shoot down Ukrainian flight
AMANDA PLATELL: Why Brangelina's reconciliation shows the real risk of easy divorces
Prince Philip fans crack jokes on Twitter about indestructible Duke
Boris Johnson to meet Leo Varadkar in Dublin to keep Brexit deal alive
Woman, 23, battled sepsis TWICE in six months and claims doctors wrongly sent her home
Medical cannabis is available on the NHS from TODAY following a landmark move by the Government