Former Tory leader Iain Duncan Smith says local Conservative associations could boycott the EU elections if the UK is still a part of the bloc next month.

The Chingford and Woodford Green MP slammed the Conservative leadership for not following through on its promise to leave on March 29, calling it a ‘disaster’ for party support.

Mr Duncan Smith said the elections are ‘impossible to justify’. He ridiculed the notion of campaigning for the May 23 election while at the same time saying British MEPs won’t exist in a few months. 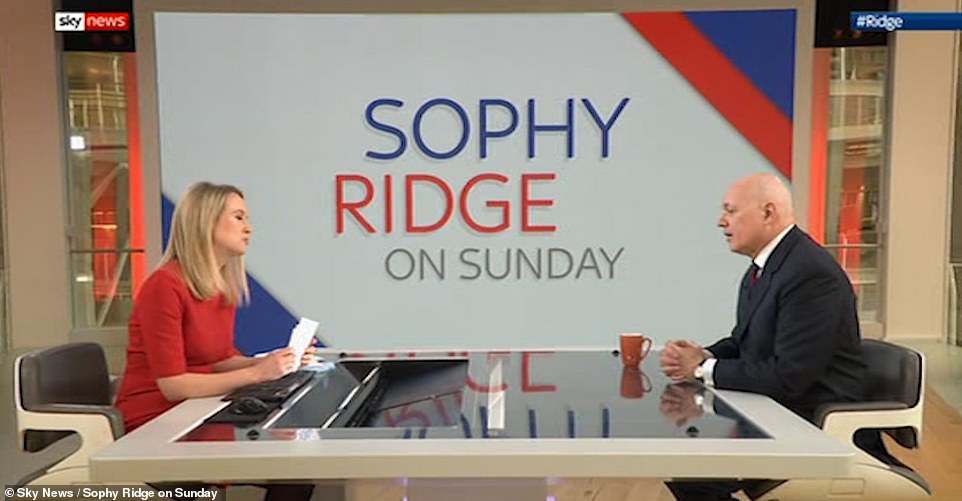 He asked Sophy Ridge on Sky News: ‘What are you going to say on the doorstep? Vote for me and Ill be gone in three months?’

It follows Boris Johnson branding the elections ‘ridiculous’. After months of wrangling over how to prevent a hard border in Northern Ireland, Mr Duncan Smith said Brussels knows full well an Irish backstop cannot work and should be scrapped.

He suggested that Theresa May’s extending of the withdrawal process could kill off the Conservatives at the polls, saying ‘extension is death’ after the UK was given six more months to negotiate its exit.

It comes as polling puts Nigel Farage’s newly formed Brexit Party as having the third largest share of the vote, with Labour ahead of the Tories. 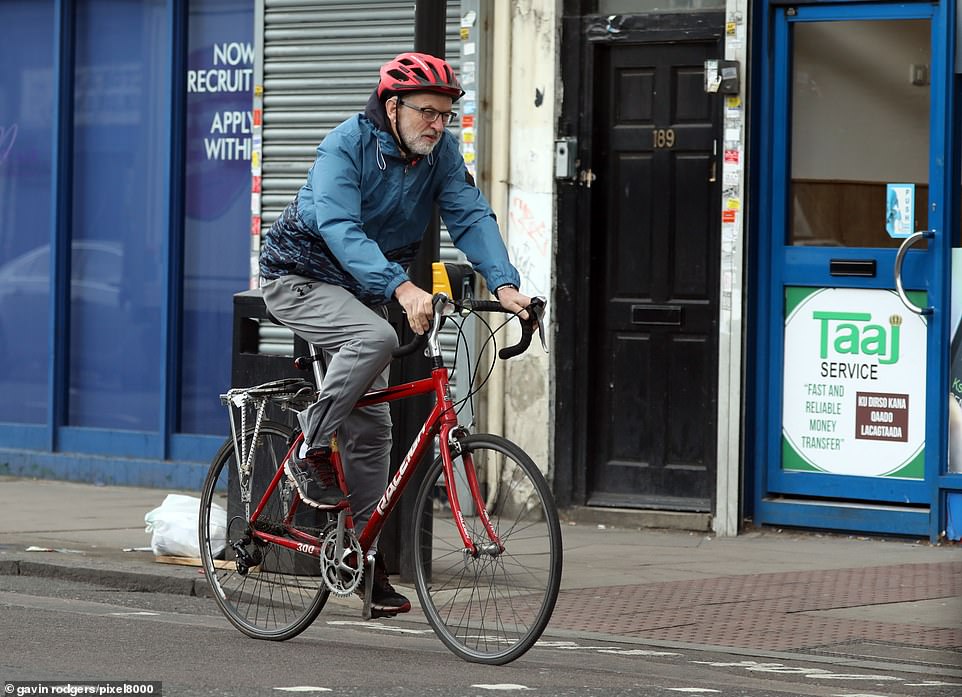 Jeremy Corbyn is pictured cycling through Islington, North London, today as Labour poll ahead of the Conservative Party 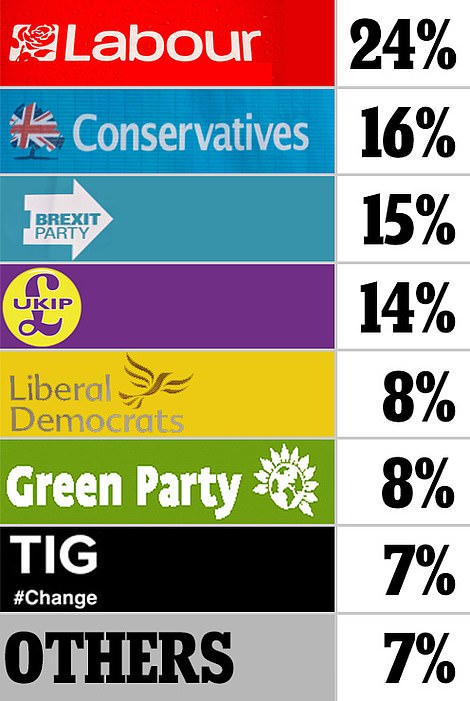 An Electoral Calculus poll of polls, including 8,561 people spoken to between April 2 and 11, found that Labour would become the largest party in the Commons, winning 296 seats to the Conservatives’ 259 if a vote was held.

Change UK – a breakaway group of MPs who are campaigning for a second referendum – are polling at seven per cent.

Yesterday Farage whipped up hardline Eurosceptics into a frenzy today as he vowed his new Brexit Party would cause an earthquake among ‘the career political class’.

The arch-Leaver told a packed auditorium in Birmingham at the party’s first rally that ‘we are lions being led by donkeys’ as he tried to galvanise his supporters before expected European Parliament contests next month.

And the former Ukip leader, who has since turned his back on the party for ‘lacking good people’, tore into the government for its handling of Britain’s departure and also prominent Remainers for refusing to honour the referendum result.

He said: ‘I find myself standing here today in my sixth European election campaign. 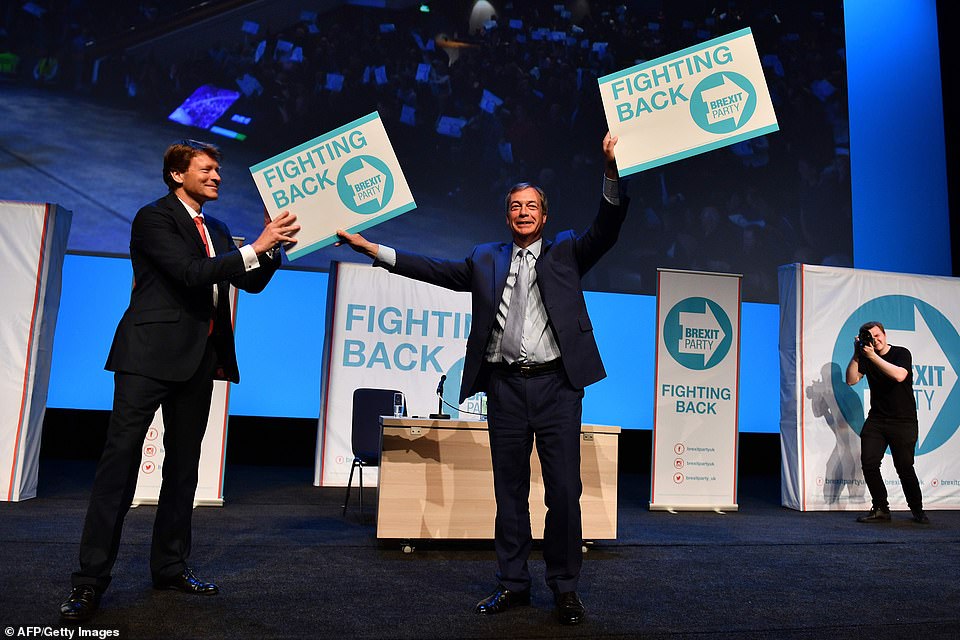 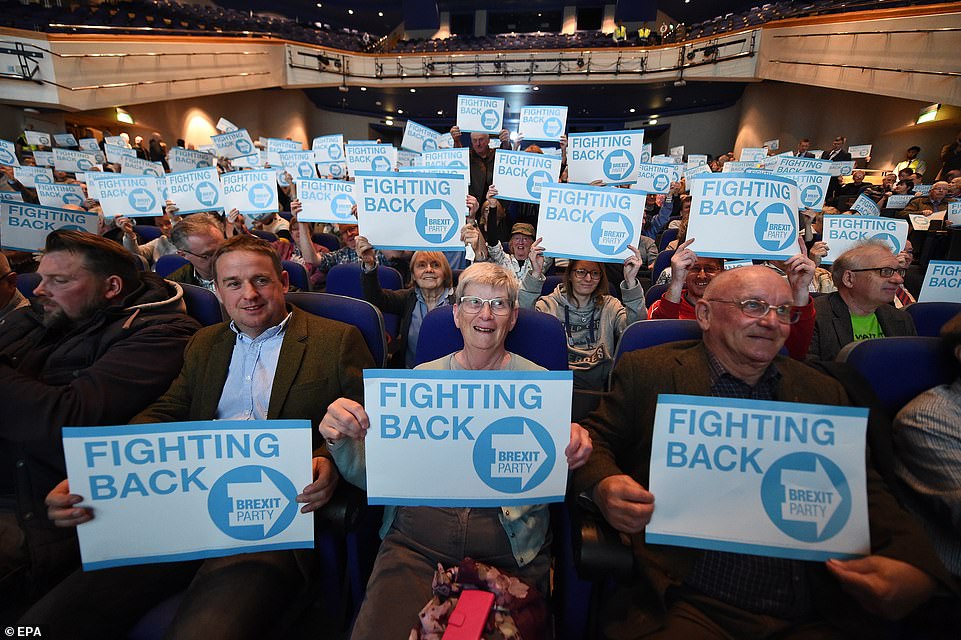 Supporters gather in a hall at the Birmingham ICC at 2pm today for the first rally event, after Farage visited the city’s Bullring Indoor Market

He also hit back at claims that Brexit has divided the nation and instead blamed fractures on the ‘political class’ who he claims are ignoring the 2016 vote.

His explosive intervention comes a day after Jacob Rees-Mogg’s sister Annunziata, was the party’s first star MEP candidate – after she quit the Tories after 35 years.

European Parliament elections are likely to happen in the UK on May 23 after Theresa May secured an extension to Britain’s departure deadline until October 31.

1 railroad worker dies, 2nd seriously hurt in Chicago blast
Adverts with 'harmful gender stereotyping' will be BANNED
Four people are killed and six wounded in a shooting at a backyard party in Fresno
Central London roads will have 20mph speed limits as part of Mayor Sadiq Khan trial £100 fines
Audience members fight each other to escape first screening of Holocaust film The Painted Bird
Iran's coronavirus death toll rises to 15 amid surge of new infections
How Twitter helped turn Lady Beth from prodigy to prostitute
Judy Finnigan, 70, claims she came ‘close to death’ after taking Ibuprofen for knee pain