A New York cop knelt on a black man’s neck until he passed out as the victim’s distraught dad begged the officer to stop, fearing his son ‘was going to die just like George Floyd‘.

Shocking footage surfaced on social media Monday of an unnamed officer kneeling on the neck of Yugeshwar Gaindarpersaud, 31, during an arrest in Schenectady, New York, that morning.

Gaindarpersaud said he lost consciousness and later woke up in hospital – and claimed ‘five minutes more… I would’ve been gone’.

The shocking encounter comes just weeks after the state and city banned cops using controversial knee-to-neck holds – the same tactic used by a white Minneapolis cop to kill Floyd when he knelt on his neck for almost nine minutes.

Around 100 protesters gathered outside the Schenectady Police Department Monday evening to call for the officer to be fired. 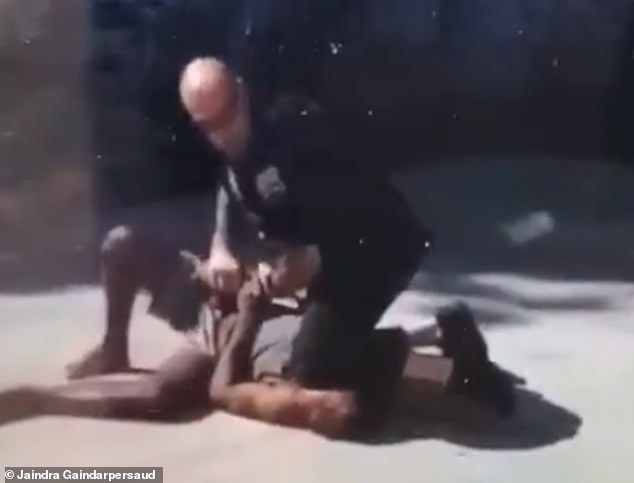 Shocking footage surfaced on social media Monday of an unnamed officer kneeling on the neck of Yugeshwar Gaindarpersaud, 31, during an arrest in Schenectady, New York, that morning

In the 22-second video shot by Gaindarpersaud’s father Jaindra Gaindarpersaud, the cop is seen pinning the man to the floor with his knee on his neck.

The victim’s father is heard begging him to stop and asking: ‘What has he done to you?’

The cop looks up at him and shouts at him to ‘go back inside now’ and to ‘back up.’

Gaindarpersaud, who said he was charged with resisting arrest, said the violent altercation started when officers confronted him outside his home over reports his neighbor’s tires had been slashed.

He claimed he then turned to walk away from the officer, telling him to provide evidence of his involvement, when the cop threw him to the floor and knelt on his neck.

‘His whole body weight was smashing my head into the concrete,’ Gaindarpersaud told the crowds gathered at Monday evening’s rally.

Gaindarpersaud said he pleaded with him to stop, saying ‘I can’t breathe’ – the same final words uttered by Floyd before he passed out and died in shockingly similar circumstances. 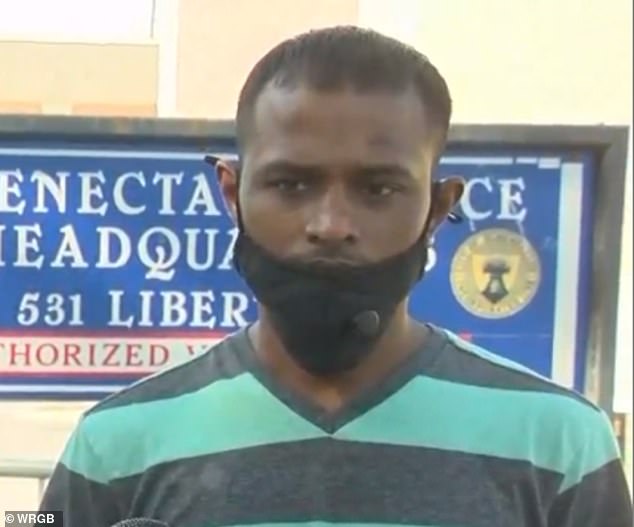 Gaindarpersaud (pictured) said he lost consciousness and later woke up in hospital, as he warned that ‘five minutes more… I would’ve been gone’

The victim said he lost consciousness after being put in the patrol car and woke up in Ellis Hospital, reported CBS Albany.

‘If he had me five minutes more later… I would’ve been gone,’ he added.

Calls are mounting for the officer to be fired over the incident, with Gaindarpersaud saying he ‘need[s] justice’.

The victim and his distressed father joined protesters in holding a peaceful rally outside the police headquarters, where demonstrators chanted ‘get your knees off our necks.’

Jaindra told crowds how he feared his son was dying as ‘he was not moving anymore’.

‘George Floyd formed in my mind,’ he said.

‘I thought in my mind ‘he’s going to die just like George Floyd’.’ 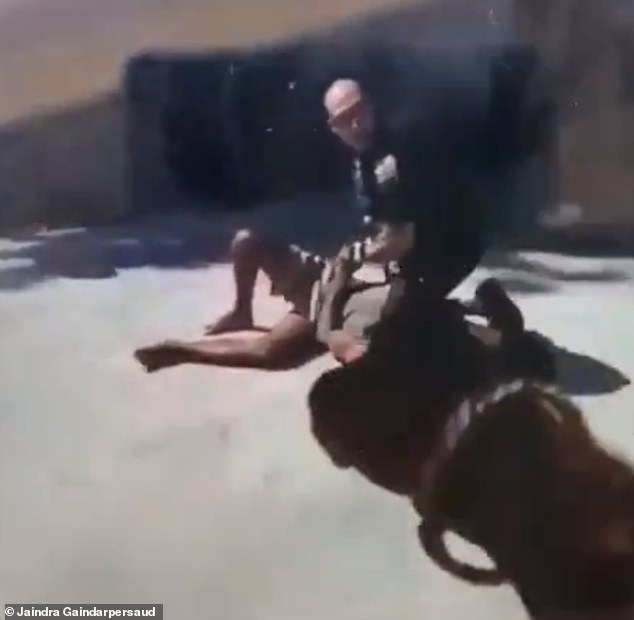 In the 22-second video shot by Gaindarpersaud’s father Jaindra Gaindarpersaud, the cop is seen pinning the man to the floor using his knee on his neck (pictured) 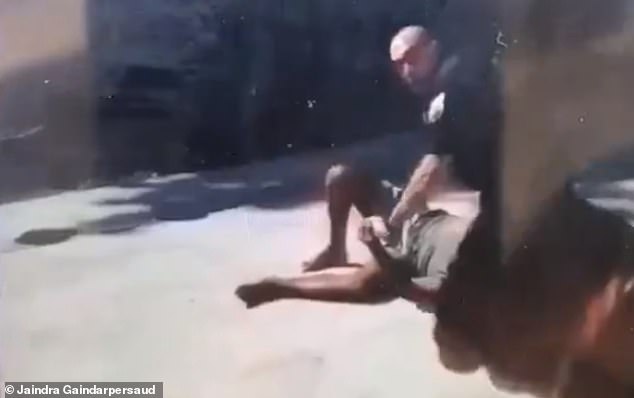 Police said the officer had responded at 9:38 a.m. Monday to reports of vehicle tires being slashed as part of an ongoing neighbor dispute.

When the cop tried to detain a male suspect, he fled on foot and a brief chase ensued, they said.

A struggle then allegedly broke out and the cop lost his radio and had to ask witnesses to call for back-up.

‘A brief foot chase and struggle ensued during which the officer lost his radio and asked a nearby witness to call police,’ police said in a statement.

‘Additional responding officers arrived on scene and were able to assist the original officer and ultimately place the male into handcuffs.’

The police department’s Office of Professional Standards has launched an investigation into the incident.

‘The Department has been made aware of a video circulating on social media partially depicting the incident,’ police said in a statement.

The Schenectady Police Department did not immediately return DailyMail.com’s request for comment.

The Schenectady NAACP has voiced ‘grave concern’ over the video and demanded a full investigation and review of body camera footage. 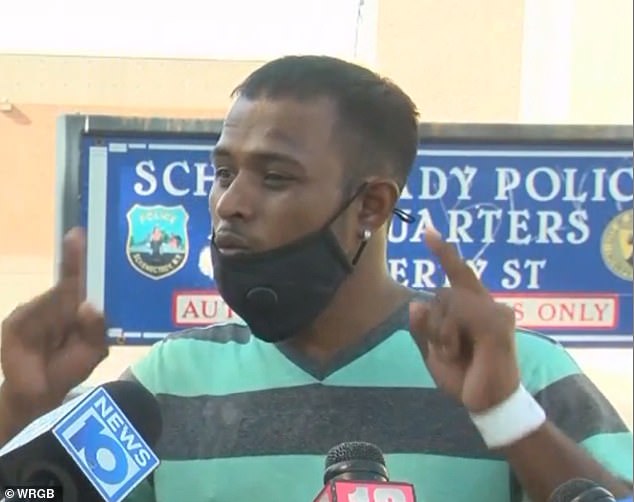 Around 100 protesters gathered outside the Schenectady Police Department Monday evening, demanding the officer in the video be fired from the force

‘We demand that all citizens be treated equally regardless of their race or ethnicity. We are in a critical time, and any inexcusable behavior by law enforcement must be addressed immediately.’

The shocking encounter comes just weeks after the controversial knee-to-neck tactic was banned by both New York state and the city of Schenectady as part of sweeping police reforms to combat systemic racism and police brutality in the wake of the Memorial Day ‘murder’ of Floyd.

Governor Cuomo signed into law a series of major police reform bills on June 12 including a ban police chokeholds, and also issued an executive order mandating reforms to local police departments and warning that if such steps are not taken, departments will lose state funding.

Police Chief Eric Clifford has previously slammed the use of the tactic following Floyd’s death, saying ‘I haven’t seen one person watch that video and reach a different conclusion than I’ve reached.’

Foreign socialite who helped Nixon win the White House
Post office bosses still took postmasters to court knowing glitch could be to blame for shortfall
Rare 14th century gold coin worth up to £3,000 is found hidden inside a wooden bureau
Sleepwalker, 21, ordered to give partners warning about his 'sexsomnia'
Three men are stabbed in a fight outside celebrity Oxford Street nightclub
Scottish MPs critical to second Brexit referendum...
Thief tries to steal Rembrandt paintings from Dulwich gallery
Grandmother, 64, reveals terrifying moment her hand was bitten off by 14 STONE dog in savage attack